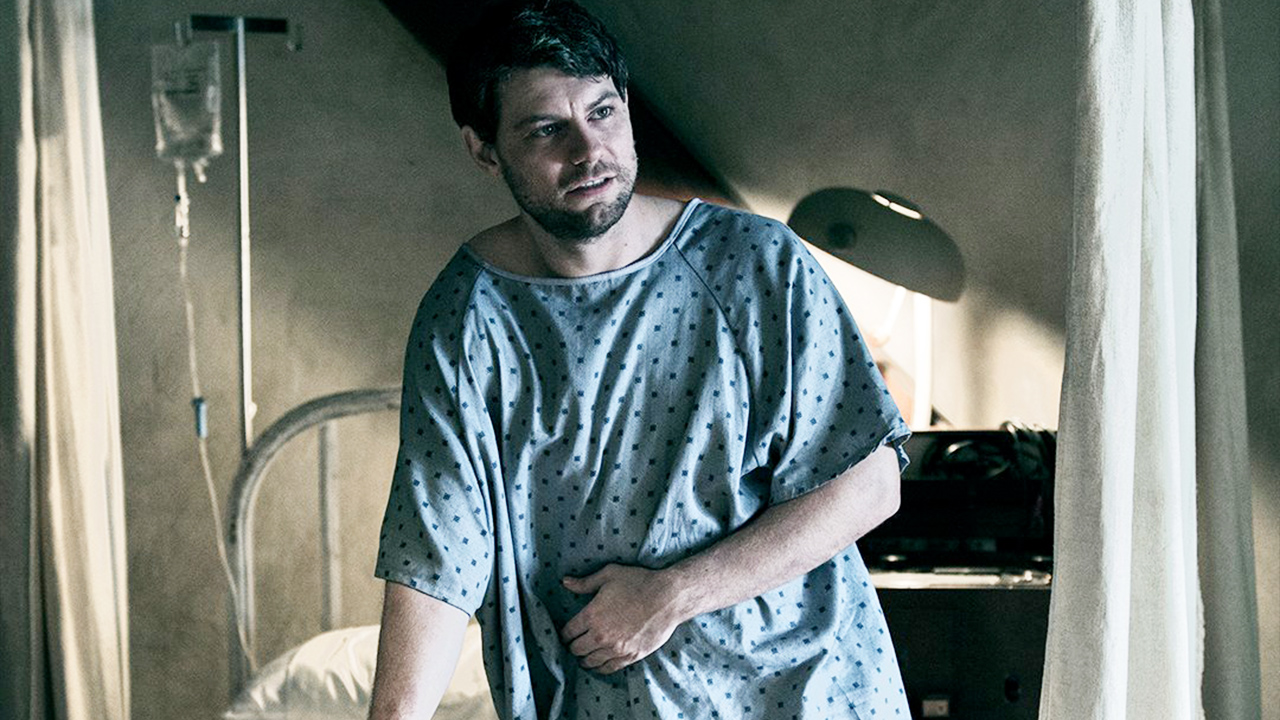 Surgeons work to save Kyle’s life from the stab wound he suffered by Giles. He later wakes up alone in a bloody and finds his mother in a nearby room – she looks as she did in his youth and Kyle realizes he’s in a dream. He apologizes to her for bringing demons upon her and she rebukes him for not finishing them off for good. Kyle’s stomach starts bleeding and his mother (now in her demonic state) grabs his neck until a bright entity shoots out of his mouth.

After a long wait the doctors come into the waiting room to tell Megan, Allison, Rev, and Amber that they did everything they could but Kyle didn’t make it. Allison forcefully grabs the doctor and demands to see Kyle until Anderson pulls her away, promising she’ll see him soon enough.

Rose informs Giles of Kyle’s passing and he laments that Kyle was the best chance they had at beating these demons but now it’s over. Rose scolds him for giving up and tells him, “That’s not the man I married.” Elsewhere, Sidney tells Aaron that 30 years ago a woman named Helen tried to rush the great merge. He opens a trunk and reveals a boy lying inside. Aaron asks what he has to do with anything and Sidney says it’ll be a “team effort.”

Amber draws a picture for her father and Megan reminds her that Kyle is dead. Amber says, “They made a mistake.” Later, Megan reveals to Allison that Kyle actually died trying to save Giles from the demons. Allison brushes it off as fantasy but Megan says it’s not and they should have believed him. Elsewhere, Kyle wakes up in a “hospital” bed in excruciating pain – this time it isn’t a dream. He tries the door and discovers it’s locked.

Anderson visits Giles to inform him about Owen’s murder and how he overheard Sidney say someone in the gym that night was more powerful than Kyle. He suggests they question the people at The Lighthouse to see if they know anything but Giles says he’s done. Anderson tells him “fuck you” and leaves.

Megan tries convincing Allison that the demons are real, and when she tells her she’s crazy Megan tells her, “Then go back to the nut house where you belong!” She immediately regrets it but then confesses that the demons made her kill Mark. Meanwhile, Anderson arrives at The Lighthouse to talk to Dakota. She reveals some of the people at this church are recovering from being possessed and Anderson asks if there’s someone among them like Kyle. She says no and asks how he is; Anderson tells her he’s dead. He drives away as Dakota texts a mysterious number saying she need to talk to them about Kyle.

Back at the “hospital” Kyle makes a makeshift key to escape but hears footsteps and retreats back to his bed. Sidney walks in and has a coughing fit, Kyle smirks and says, “That thing’s killing you, isn’t it?” Sidney says one day he and everyone else won’t need these bodies. Sidney calls him firefly and tells him to get some rest, causing Kyle to lunge at him and burn his face with his hand. Kyle covers his head in sheets to suffocate him but Sidney punches his stitches, causing Kyle to keel over in pain. A nurse walks in and Sidney tells him to get Kyle back to bed.

Anderson visits Megan and Allison and tells them that there might still be people out there like Kyle who can help. Allison says she’s leaving and Megan suggests she sees Kyle’s body for closure. Allison says she can call Dr. Park whenever, which Anderson perks up at. He explains Park is “one of them” and they must talk to him immediately. Meanwhile, Aaron taunts Evelyn’s kid. It’s clear he’s jealous of him.

The nurse tries giving Kyle anesthetic but Kyle stabs him in the neck with his makeshift key and escapes. He stumbles to the stairwell in unbearable pain as Anderson, Megan, and Allison arrive at the hospital and question Dr. Park. Anderson accuses him of being “one of them” as Amber sneaks off to search for her dad.

Amber locates a mysterious door in the basement as Allison, Meg, and the Rev catch up with her. Amber points at the door as Dr. Park shows up, telling them they can’t go in there. “He’s in there,” Amber says. Allison tells her they have to leave but Amber says no and runs over to Dr. Park and grabs his wrist. His arm burns and he falls to his knees shrieking in pain. Anderson gets him in a chokehold and gets the key from him. They open it and Kyle falls out from the other side bleeding. Kyle asks how they found him and Amber says, “Fireflies can see other fireflies.”

Sidney returns home with take-out and (to his horror) finds the boy dead on the floor. Sidney asks, “What have you done?” and Aaron admits he was jealous. Sidney calls him short-sighted and explains he brought the kid here to speed up Aaron’s transformation. Meanwhile, Rose visits Evelyn to tell her she’s been looking forward to retirement with her husband and Evelyn assures her once she’s merged she can still do that. Rose says no and shoots her in the head.

Sidney disposes of the boy’s body and returns to the house. Aaron says he’s ready to speed things up so Sidney tells him to lie down. Aaron closes his eyes and Sidney picks up a pillow as if to smother him. Shortly after, Sidney grabs a butcher knife.

What did you think of the episode? Tell us in the comments!

Cassady McClincy Cast As Lydia In The Walking Dead Season 9