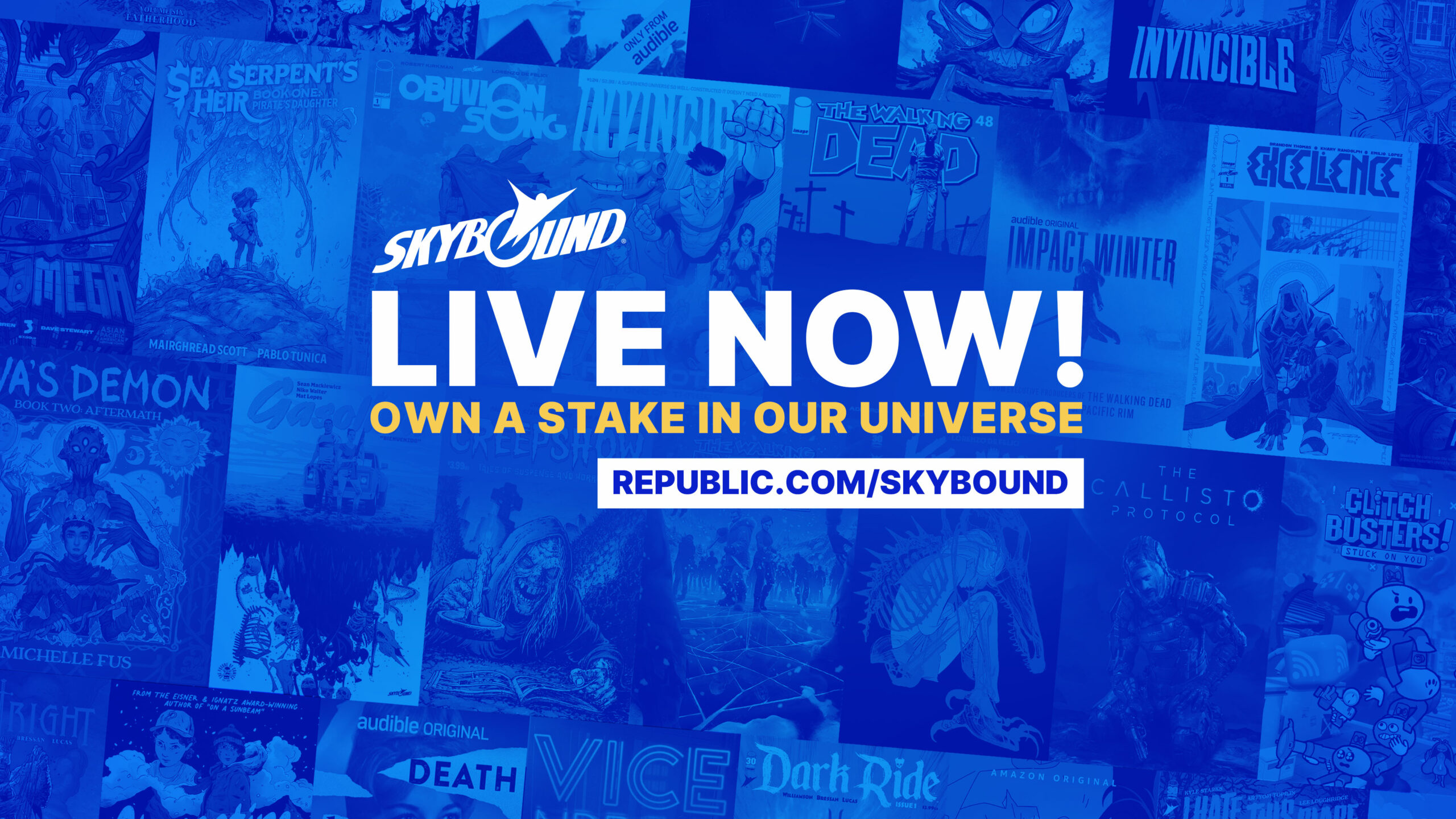 Skybound is a company for creators. We’re known for using the Wheel of Awesome to make cool stuff, no matter the platform. We place creators and their projects at the center of the wheel and work with them to keep the integrity of their vision as it becomes a comic, game, TV series, film, audio series, or all of the above.

Skybound builds global franchises. We’ve been the home of The Walking Dead and Invincible since 2010 and are leaders in creating universes that become pop culture phenomena from our library of over 150 properties, including the emerging tentpole Impact Winter.

We’ve made Skybound a home for millions of fans and make sure to connect with them daily – whether it be in-person or online. We’re fans of our fans and are constantly exploring new ways to interact with them through our content distribution. And that starts with our Wheel of Awesome.

Leveraging our multi-faceted business, we place our esteemed Skybound creators and properties right in the center of the Wheel of Awesome and determine how best to build brands and franchises out of the IP.

Skybound has a library of over 60 titles published across hundreds of issues and collections, including 16 active series published in 2022. Our comics are printed in 30 territories and in 22 languages. Our most notable series include The Walking Dead, Invincible, and Birthright – all with television and film projects currently in development.

This is the first LEGO® branded comic book series release from our landmark partnership with global children’s book publisher AMEET, with additional top-secret new series to be announced soon.

Another major partnership for us is CREEPSHOW, the new star-studded five-issue comic book anthology based on the hit Shudder TV series produced and licensed by Cartel Entertainment. Our comic advances the worldwide phenomenon that began with George A. Romero and Stephen King’s iconic 1982 film and has continued with the Greg Nicotero-helmed genre anthology series entering its fourth season on Shudder.SKYBOUND COMET, a new original graphic novel imprint aimed at Young Adult (Ages 12+) and Middle Grade (Ages 8-12) audiences launched in 2022 with titles that can be found everywhere books are sold! Skybound Comet officially began with Clementine Book One begins a trilogy set in the world of Robert Kirkman’s The Walking Dead, from award-winning writer/artist Tillie Walden (Spinning, On A Sunbeam). That was soon followed by the release of Everyday Hero Machine Boy OGN from rising star voices Tri Vuong (LEGO Ninjago Garmadon) and Irma Kniivila, and then Sea Serpent’s Heir Book One, which kicked off a fantasy trilogy from acclaimed creators Mairghread Scott (Star Wars: Resistance, Guardians of the Galaxy) and Pablo Tunica (TMNT Universe)!

Our creator-first approach also involves launching Kickstarters – fan-funded campaigns that leverage the creator’s fanbase to create compelling stories. In 2021, Skybound launched the Ava’s Demon: Reborn Kickstarter campaign, one of the most successful graphic novel crowdfunding campaigns of all time, raising over $530k in backer pledges. In total, our comic campaigns have raised over $1.3MM in backer pledges.

We’re thrilled to partner with Universal Pictures for a first-look deal. One project from that partnership, Renfield starring Nicholas Hoult, Nicholas Cage and Awkwafina is currently in post-production and will be released in 2023.

On the television front, Skybound has a joint venture with Sony Television Distribution with two scripted series in preproduction, set to release in 2023. Oh, and we also have 75+ projects in active development (we like to stay busy).

And you can’t forget about the ears. Skybound also holds a first look development deal with Audible. In 2022 we released Impact Winter, a scripted long-form fiction Audible Original that soared to #1 on Audible+ for Audible Fiction and #3 on Apple Fiction. Two additional seasons of the hit series have been greenlit.

Four new podcasts are currently in production, including the adaptation of the Eisner-nominated comic Gasolina,  created by Skybound’s SVP, Publisher Sean Mackiewicz and Niko Walter, set to premiere in July 2023.

Skybound has begun to bring its comics to life with animation. The smash-hit TV series Invincible, for Amazon Prime, is Certified Fresh on Rotten Tomatoes with a 98% rating and has been green-lit through Season 3. Building on that success, Skybound has established a growing 200-person animation studio with four projects in production that include a multi-format and style capability—hand-drawn 2D, 3D, and realtime in-engine.

Skybound is a force in games. We publish, produce and distribute video games across every genre, including the blockbuster The Walking Dead series and the BAFTA award-winning Before Your Eyes.

Established in 2018, Skybound Games is one of the premier studios, publishers and partners in the gaming industry. We’ve tapped our internal IP to develop games based on The Walking Dead, Invincible and more. We publish on every platform people play games on including PC, Sony Playstation, Microsoft Xbox, Nintendo Switch, iOS, Android and Steam.

Through our strong relationships in the industry, we also work with the best game creators in the world, financing, producing and publishing the original games they make.

Skybound’s Wheel of Awesome has also created the capability for global distribution in the gaming division, establishing a Worldwide network of trade distribution and licensing partners, with a sizable footprint in every viable games marketing in the world. We also partner with developers and publishers to release physical versions of our digital products, leveraging our global marketing and distribution to expand our reach, in standard and high-vale collector’s editions.

The Walking Dead fan-favorite products include Spirits of the Apocalypse Bourbon , The Walking Dead wine, vinyl Soundtracks, toys and collectibles, action figures, and board games

Invincible highlights include bestselling merchandise from Season 1, collectibles, action figures, as well as upcoming tabletop and party games to be announced soon

Our tabletop games category is led by titles such as Superfight, and including several games nominated for several Game of the Year accolades and Production awards.

Our party game Trial By Trolley launched as a Kickstarter with $3.5MM+ raised in 30 days and 60k+ global backers.

And we couldn’t have done this without our incredible fans.

The final spokes on the Wheel of Awesome are what separates Skybound from its competitors.

Online Programming is Skybound’s bread and butter, ,andevery division of Skybound is supported by online programming on a monthly basis. Comics Vault Live, hosted by Shawn “Big Clutch” Kirkham, is the monthly destination for the rarest and most sought-after new comic book releases.

Since Skybound’s inception, emerging platforms in entertainment have blossomed into billion-dollar businesses. We’ve remained on the pulse of these platforms with numerous iterations in metaverse, web3 and VR. Most recently, The Walking Dead has entered the metaverse with Sandbox, the global decentralized gaming virtual world and a subsidiary of Animoca Brands. Inside The Sandbox metaverse, the carefully integrated The Walking Dead game experience encourages gamers to unite with friends and other players as they overcome the day-to-day requirements of surviving a walker-infested habitat: scavenging for food, gathering resources, building walls, nurturing relationships, making alliances and more.

The VR hit, The Walking Dead: Saints & Sinners has sold 2MM units and has a sequel set to debut at the end of the year.