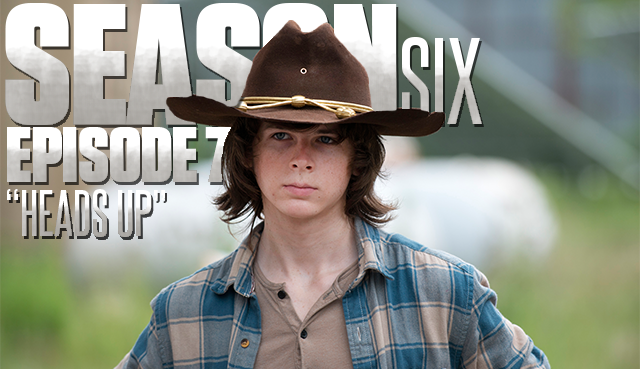 We can FINALLY let the cat out of the bag. Glenn is…ALIVE. Your Watergate/Glenngate/DumpsterGate theories were mostly right! We’ve had a lot of fun watching everyone’s paranoid takes and hilarious memes on The Walking Dead’s biggest controversy to date. To sum up, it WAS Nicholas’ intestines, Glenn DID make it under the dumpster, and he DID live to tell about it. Here’s our favorite meme about it: 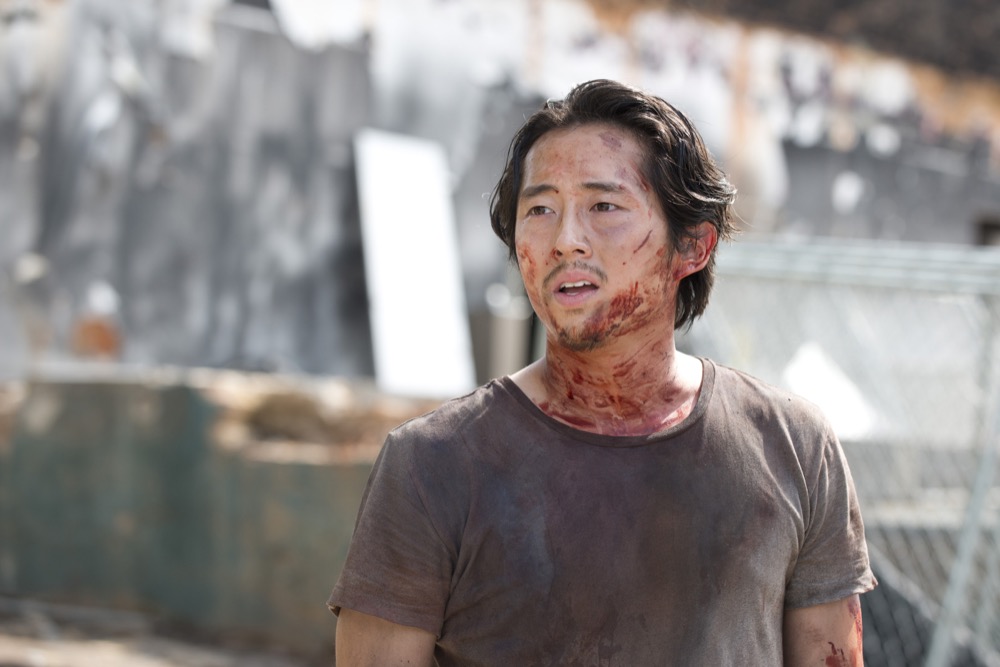 BACK to the episode: With a broken flare gun and an empty water bottle, Glenn is S.O.L. Thankfully, Enid shows up and tosses him a bottled water from the roof. “Heads up,” she yells. Glenn searches for her in the nearby building (he couldn’t have gone in there earlier?!), catches up with her, and chases her out. Back in Alexandria, Rick confronts Morgan about having talk and discovers a hole in the wall that’s emitting blood. Maggie admits her optimism for finding Glenn is waning. (She also mentions Judith is starting to look like Lori…AND SHANE). While chasing Enid, Glenn comes upon a torn-up David and puts him out of his misery (how is he still THIS in tact??). He retrieves David’s note to his wife and leaves. 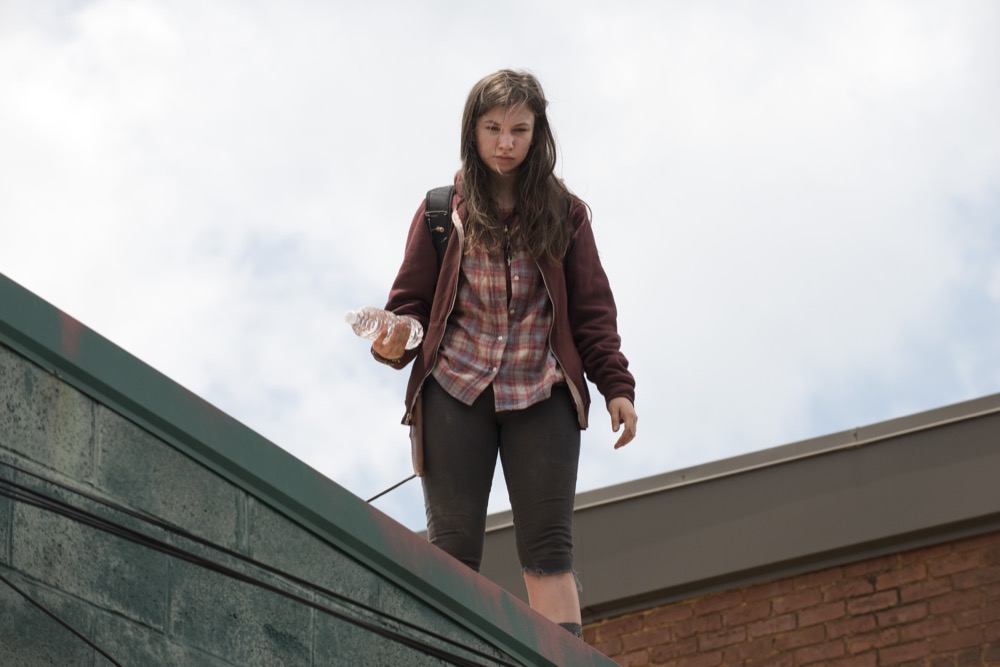 Rick tears down Father Gabriel’s prayer circle flyers (because Rick doesn’t give a F***) and later teaches Ron how to use a gun (how could that possibly backfire??) Afterwards, Rick and Carol interrogate Morgan about letting the Wolves out of Alexandria (and eventually to Rick’s RV). He admits he did but summons the example of Rick not killing him (in Season 3) as an instance of people changing. Michonne voices her skepticism and questions if he even belongs in the community. 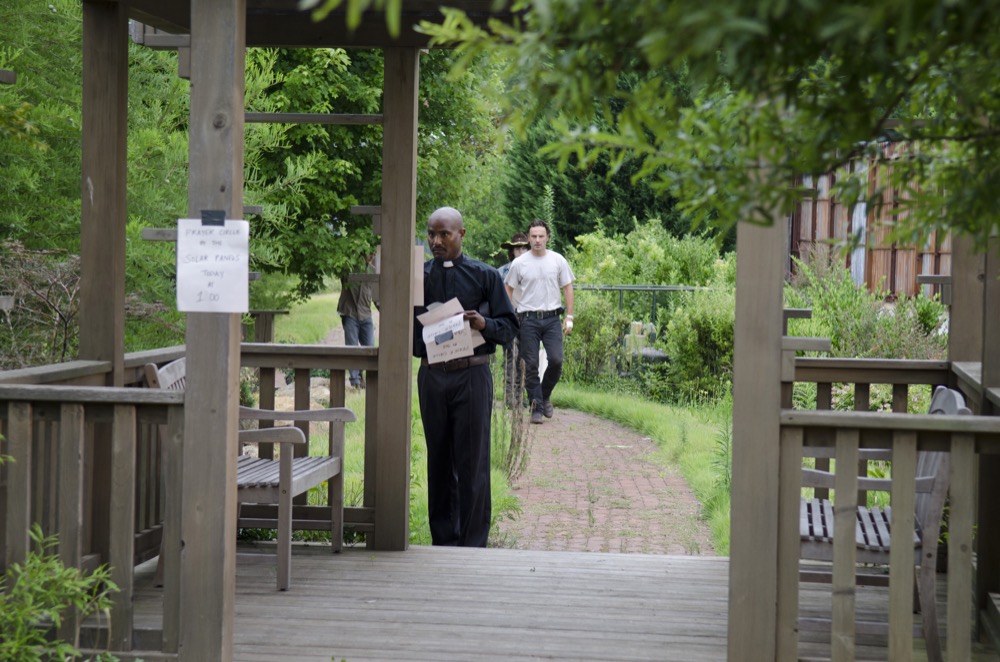 The crack along Alexandria’s tower looks worse than ever. As Michonne and Rick discuss creating more watch points, Deanna reveals her plans for Alexandria’s future. Meanwhile, Rosita teaches Eugene, Jessie, and other Alexandrians how to defend themselves with machetes. She explains to an uninspired Eugene, “Dying is simple. The people around you dying? That’s the hard part.” 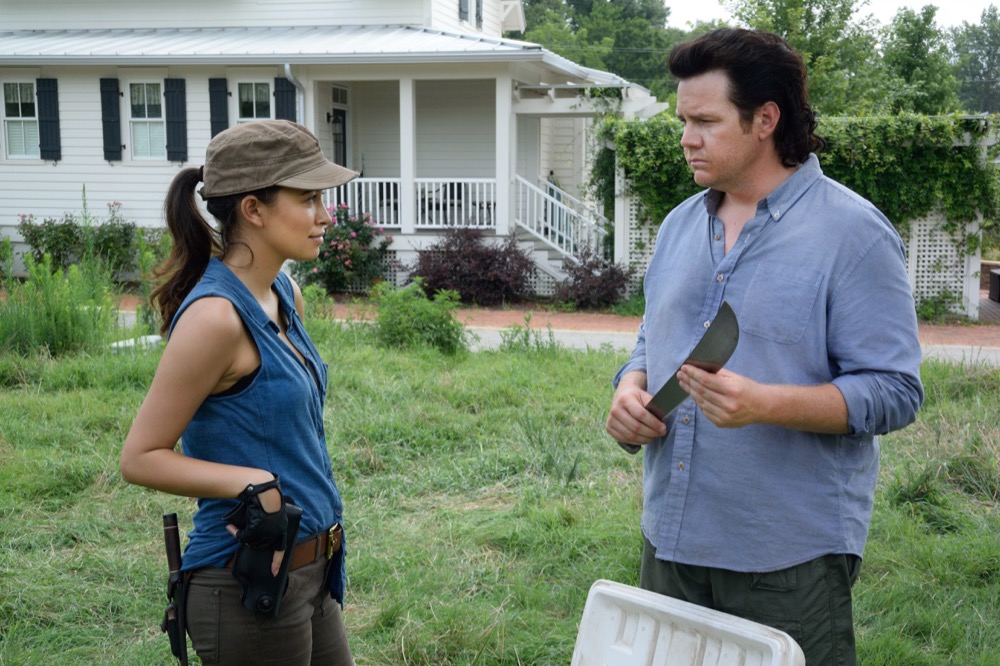 Glenn tracks down Enid and demands he take her home. After some serious persuasion, Enid reluctantly agrees to go with Glenn (with balloons)! Meanwhile, Tobin assists Rick in adding more boards to the wall. He mentions Rick scared the hell out of everyone. Glenn and Enid make it back to Alexandria to discover a herd of walkers surrounding the walls. “The world just wants to die. We’re supposed to just let it,” Enid laments.

Rick and Tobin notice Spencer climbing a horizontal rope outside the walls and rush over to help. The rope breaks and Spencer falls into a group of walkers as Tara and Michonne spring into action, take out walkers, and ultimately save Spencer. Rick castigates Tara for getting too close and she gives him the finger. He then scolds Spencer, “What…was THAT?” Rick demands. Spencer explains he intended to get in a car to drive the walkers away but Rick argues if he has an idea he needs to consult Rick first. 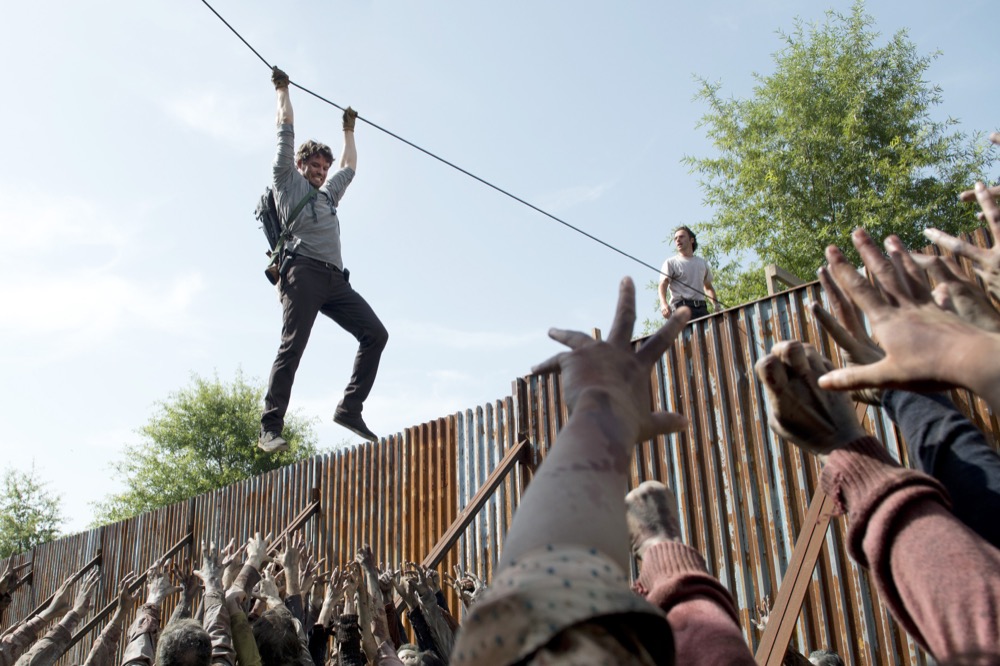 Morgan reveals his captive Wolf’s wound to Denise and asks her to look at it. Carol follows them and decides to drop Judith off with Jessie to further investigate. Before she leaves, Sam seizes the opportunity to have an existential conversation with Carol. She tells him “The only thing that keeps you from becoming a monster is killing.” Later, Carol confronts Morgan and asks who he has in his cell. Michonne notices Deanna included a church in her future Alexandrian plans.

While Ron follows Carl with a loaded gun, Rick apologizes to Tara and explains she didn’t have to save Spencer. Deanna thanks Rick for saving her son and uses it to explain there’s still good in him. Suddenly, everyone in Alexandria notices green balloons rising into the sky. Maggie takes it as a sign that Glenn is still alive and starts running towards the gate. Right on cue, the bell tower succumbs to its treacherous crack and FALLS AND CRUSHES THE GATE…LEAVING A HOLE BIG ENOUGH FOR EVERY WALKER TO COME IN. Comic fans should be freaking out right now. 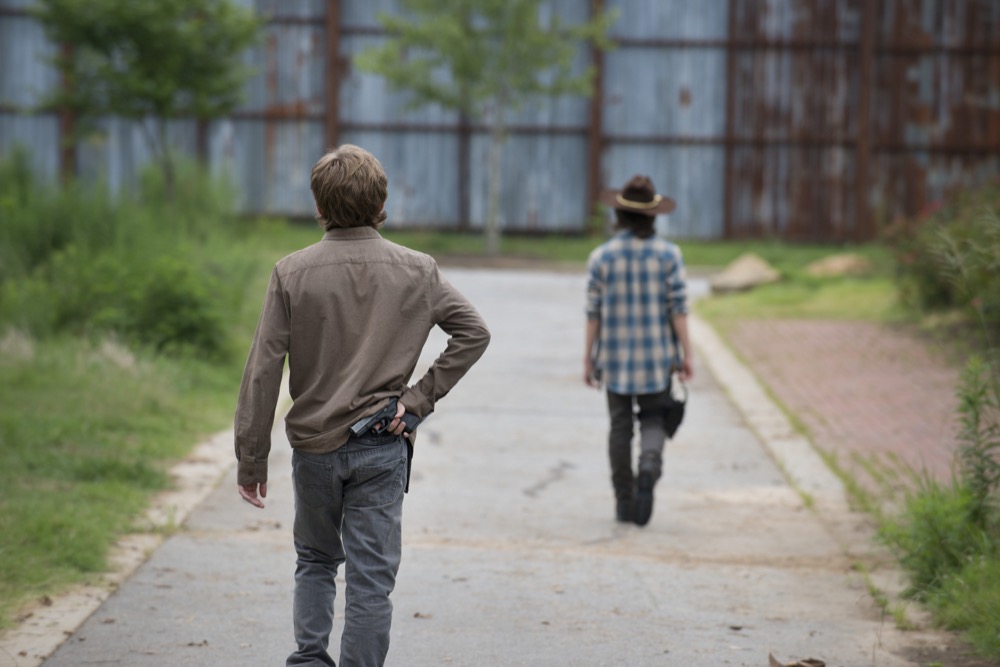