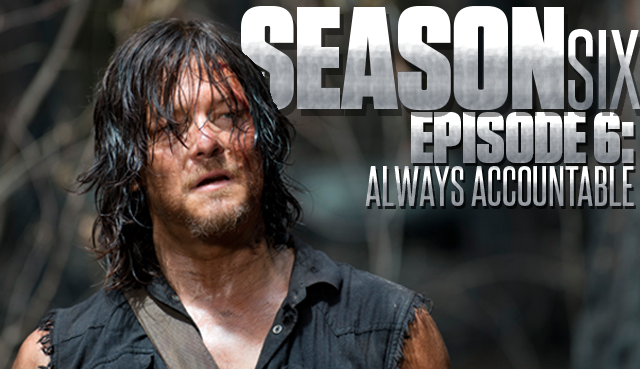 Daryl, Sasha, and Abraham approach the 20-mile marker with their zombie parade behind him (six episodes in and this plan from 601 is still happening). Suddenly, they come under fire from caravans of strangers with machine guns. Abraham and Sasha crash, jump out, and fill their attackers with led. Daryl maneuvers through walkers and escapes to a scorched forest. After hearing nothing back from the radio, Daryl notices he’s been wounded. After hiding his bike, he comes upon two women and is suddenly knocked out from behind. 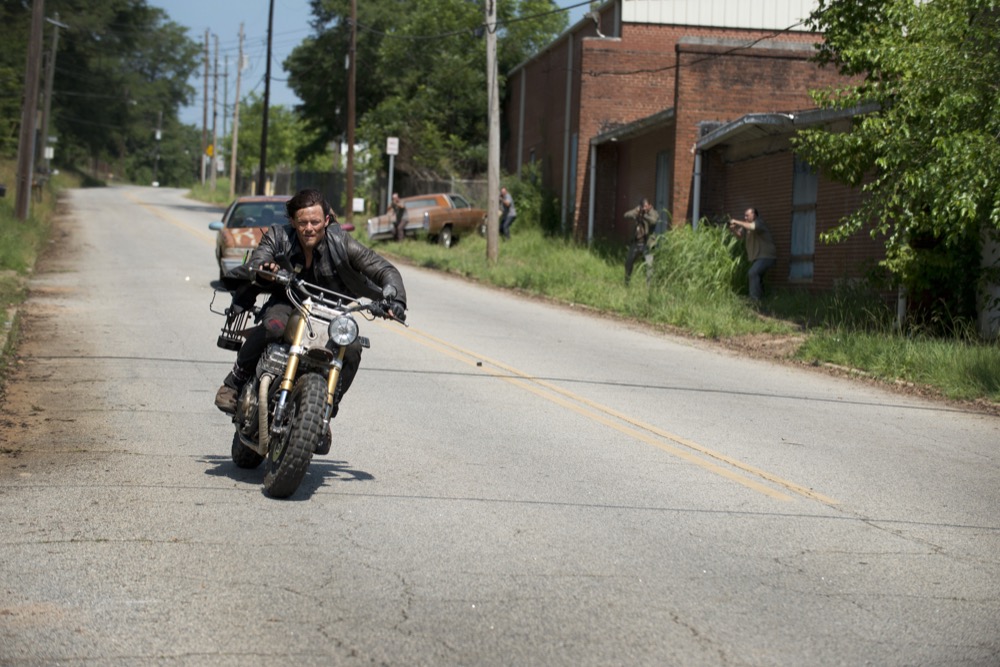 Daryl goes in and out of consciousness and hears a mysterious man with a blonde mustache (mysteriously named D) say, “Just another solider from one of the outposts. This is the last day we live like this.” When Daryl finally comes to, D demands him to walk with them through the forest. Obviously, D thinks Daryl is one of the people we saw in the beginning of the episode, but he’s not. “I ain’t who you think,” he protests. He and the girls (Honey and Tina) explain they set the forest on fire to eradicate the walkers. They arrive at a truck depot where they presume their friend Patty is. Tina passes out and Daryl takes the opportunity to escape with his duffle bag. He unties his hands, takes out a tree walker, and discovers Tina’s insulin supply. Sh*t. 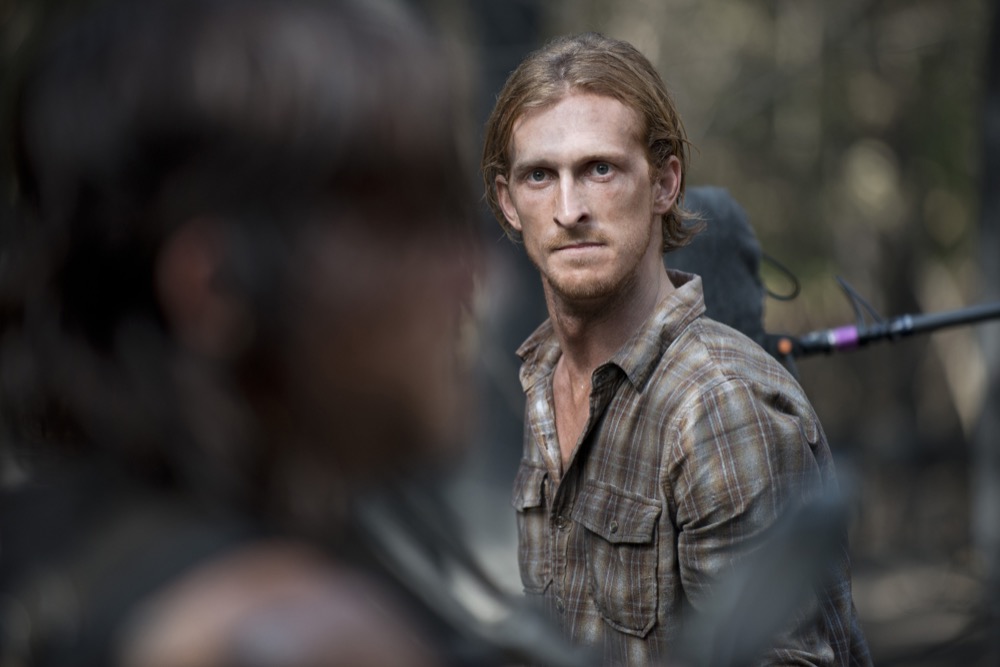 Meanwhile, Sasha and Abraham set up camp in an auto insurance building in a nearby town. A walker locked in an office looks on as they loot the place. Written on a dry erase board in the locked office is, “Proud to have provided value. I pray for the world…keep going…stay cheerful. The bites kill.” Sasha and Abraham debate over killing the walkers around them. She also lectures him about being “always accountable” (the episode title!) for people other than himself. Sasha doesn’t want to leave a trail but Abraham quips, “Loose ends make my ass itch.”

Daryl locates D, Honey, and Tina to return the insulin. Suddenly, a giant truck plows through the forest; men with green boots walk out, and demand D and girls give them back what they owe them. Daryl hides them and witness a rock walker bite one of their pursuers. His companion Wade cuts his arm off and they leave. D admits he believed Daryl was one of the men and questions why he came back to help. “Maybe I’m stupid too,” Daryl responds. 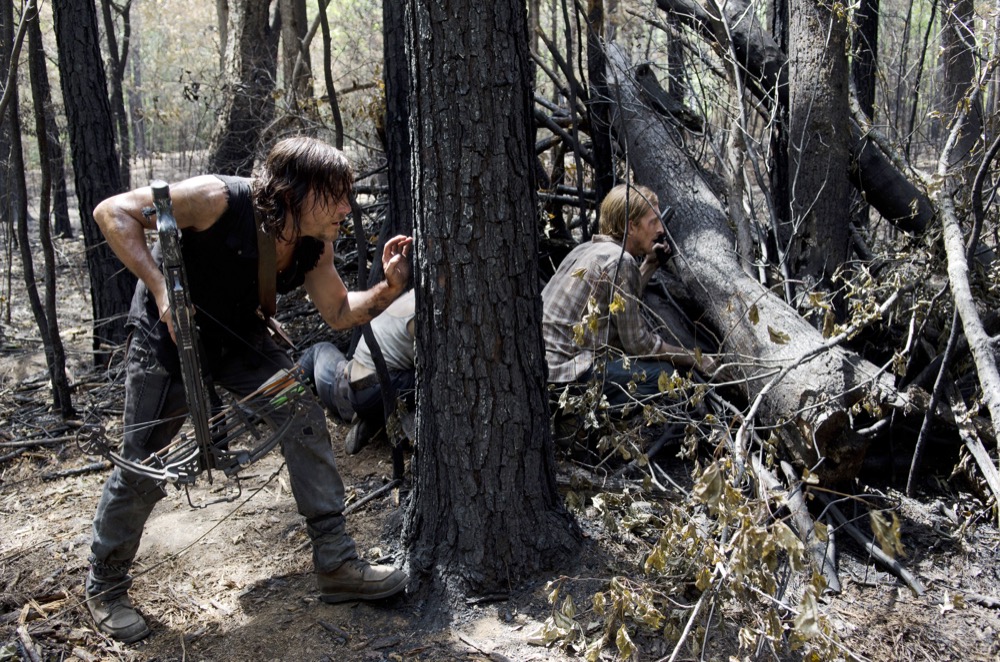 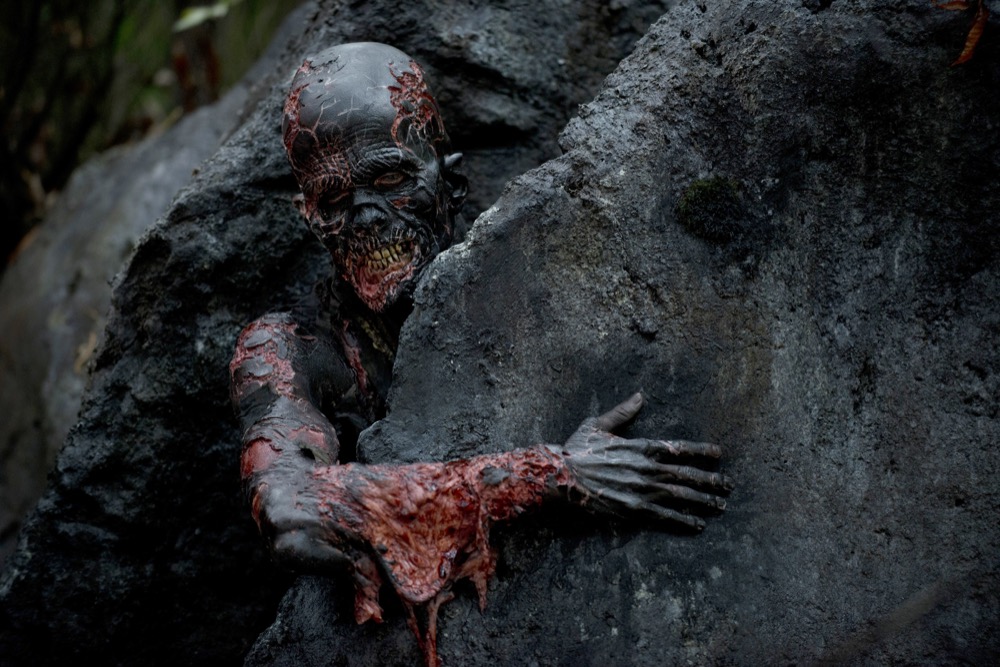 The next day, Abraham discovers a military truck full of supplies and a walker hanging by a rocket launcher from a bridge. Abraham wrestles with him to grab the RPG to no avail. After giving up and lighting a cigar, the walker slides off the gate and conveniently leaves behind the RPG. Abraham returns to Sasha with the military supplies and confesses he’s realized he wants to make the most of what’s left of his life. He conveys he wants to get to know her “a WHOLE lot better.” She responds, flabbergasted, “Well…you have some stuff (Rosita) to take care of.” Damn it, Abraham. 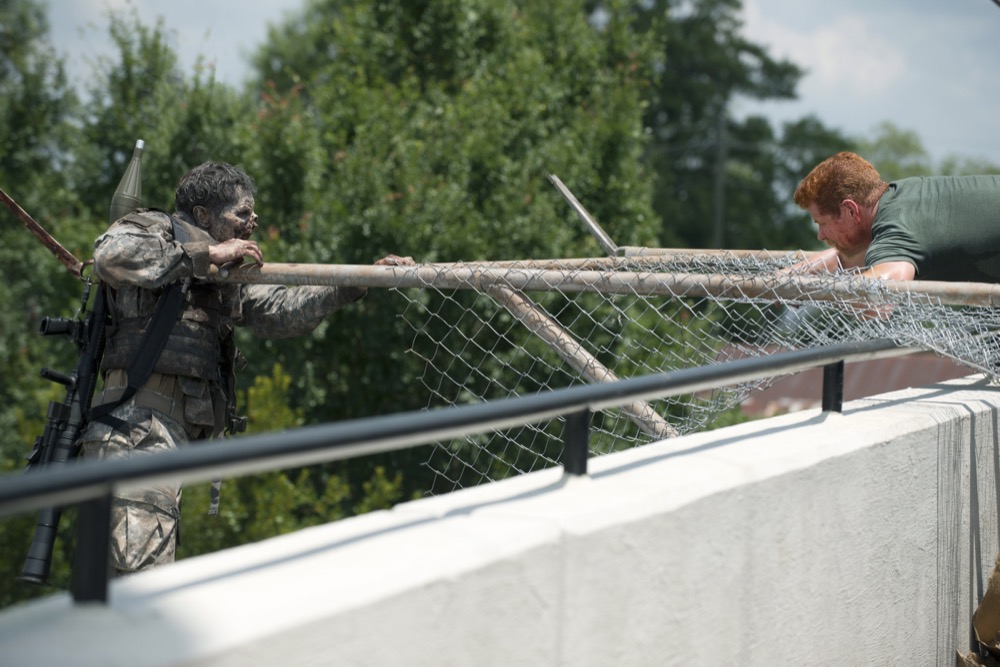 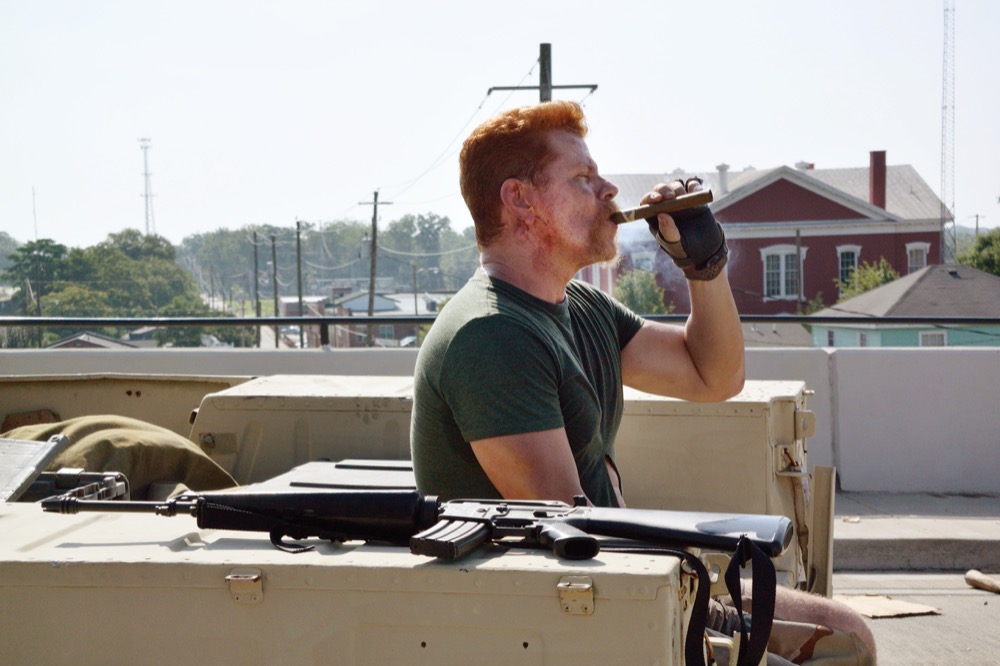 D explains to Daryl they mistook him for the others because they hadn’t met everyone in their new community yet. In that community, people have apparently given up everything in exchange for safety. (PAUSE. Is he talking about the Savior compound?!) The group locates their friends Carla and Delly, who burned to death from the forest fire. Suddenly, the walkers wake up from their glass cocoons and bite Tina. Daryl takes out the walkers but it’s too late. Later, as D buries Tina, Daryl busts out Rick’s infamous three questions: How many walkers? How many people? Why? D explains if he did, “there would be no going back to how things were.” Before leaving the forest, D and Honey hold Daryl at gun point and steal his crossbow and bike. (PAUSE AGAIN. If this guy now has a crossbow…and is named D…and MIGHT live in the Savior compound……..Is this DWIGHT?!?!?!) “We’re sorry,” they say as they ride off. “You’re going to be,” Daryl warns. Without a weapon or means of transportation, Daryl luckily stumbles upon a hidden fuel truck and uses it to pick up Sasha and Abraham. As they drive down the road reunited, Daryl hears someone on the other end of the radio cry, “Help.” 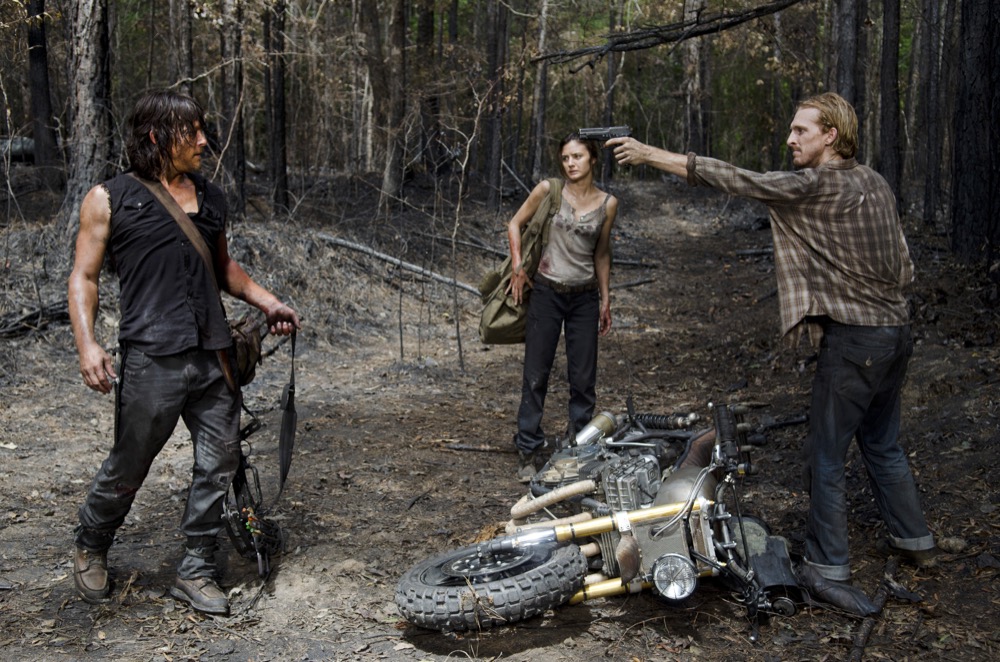 1. Do you think that was Dwight?!?!
2. Was his community the Savior compound?
3. What the hell’s going on with Sasha and Abraham??