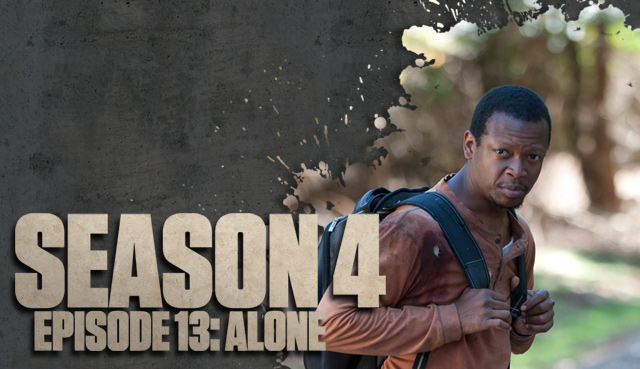 After a full episode of Daryl and Beth last week, we get to visit some other characters this week. Don’t worry Daryl fans, he’s still here.

We open with Bob in his time right before he came to the prison, on his own with a thousand-yard stare and a machete. We see him aimlessly wondering. Taking shelter in a drainage pipe or mine shaft and chugging cough syrup. It’s apparent that he’s oblivious to the dead around him and just going through the motions. He makes it to a road and camps out. The next day Bob meets Glenn and Daryl for the first time. Daryl gives Bob the three questions and they invite him back to the prison.

After the credits we’re back to present day as Bob, Sasha, and Maggie fight off a horde of walkers in the middle of a fog bank. Bob takes an errant gun shot to the shoulder from Sasha but he’s ok. We learn that they’re almost out of ammo.

When they push on they come across the train tracks and the sign for Terminus. They decide that Terminus is their best bet to find Glenn and the others, despite Sasha’s misgivings. When they make camp, Sasha makes her argument for stopping and making permanent camp. She doesn’t believe that Glenn or Tyreese are alive.

When Sasha and Bob wake up the next day, Maggie has left a note in the dirt: DONT RISK YOUR LIVES 4 ME. GOOD LUCK. Bob’s not having it. He packs up and heads off after her.

While they track her, Maggie kills a walker and uses it’s guts to write a note to Glenn to head to Terminus, which Sasha and Bob find in pretty short order.

As Bob and Sasha try to sleep that night Bob asks Sasha why she thinks Tyreese is dead but he answers his own question when he asks if she’s just afraid to find out the truth.

The next day Bob and Sasha find another bloody message from Maggie and a town not far from that. Sasha still wants to stop but Bob won’t leave Maggie on her own. When it’s suggested they split up Bob kisses Sasha and minus a large reaction says, “Well ok then” and heads off on his own after Maggie. Sasha heads into town to fortify and settle in and almost breaks down crying. When she looks out the window she sees Maggie on the ground next to a truck. As she looks closer she knocks the window loose and when it crashes to the ground it draws all the walkers nearby. She runs down to help Maggie. The two if them manage to fight off the walkers.

Maggie tells Sasha that she heard what she said about Glenn being dead but she realized that she can’t find Glenn on her own so she waited for Sasha and Bob. She convinces Sasha that they can’t give up hope.

The two of them catch up to Bob and together they follow the tracks.

The OTHER half of the episode follows Daryl and Beth, so while all of the above’s going down…

Daryl is teaching Beth to track and shoot a crossbow. They track a walker to a clearing. As Beth closes for the kill she steps on a small foothold trap. Daryl runs in to take care of the walker. Beth limps along until they reach a cemetery and when she can’t walk anymore Daryl gives her a piggyback ride. They stop at a grave and Daryl places some wildflowers on it and Beth takes Daryl’s hand while they quietly stare at the grave of a beloved father.

The two of them arrive at the funeral home. Beth remarks on how clean it is, which Daryl thinks might mean someone is still around. They find a couple of dressed cadavers and head downstairs to wrap Beth’s ankle. Beth says how it’s beautiful that someone cared enough to dress and make up the walkers.

When they raid the cupboards they notice that there’s no dust on the jars and cans. Daryl says they’ll just take some and leave the rest for whoever’s stockpiling it. They set their tripwire alarm and bed down for the night, Daryl taking the coffin. Beth sings Waxahatchee’s “Be Good” which Daryl doesn’t seem to mind for once.

The next day Daryl and Beth are sitting down to breakfast when the tripwire alarm gets triggered. It’s just a dog. That night Beth starts writing a Thank You note to whomever’s been staying there when Daryl suggests maybe they’ll just stay for a while. Before Beth can find out why Daryl has started to change his mind about people the tripwire alarm gets tripped again, along with a dog yelp. Daryl goes to get the dog but finds walkers instead. He tells Beth to run while he has a long contracted battle with the walkers. By the time he gets outside, he sees Beth’s bag spilled on the ground and a car speeding into the night. He runs after the car into the next morning where he collapses in the road, exhausted.

As he sits there the strangers that Rick just had a run in with shows up. They surround him and Daryl swings at the leader. He stops his men from attacking Daryl and introduces himself: Joe. Daryl drops his crossbow and returns the introduction. Uh oh, Daryl.

The final shot of the episode is Glenn finding the map to Terminus.

So what did you guys think?
Do we need a couple name for Bob Stookey and Sasha? Bobsha? Stoosha?
Would you be so chill if Sasha shot you?
Who are Joe and his boys? I don’t think they’re good news…
Who the F snatched up Beth?!

Read what Robert Kirkman has to say about the episode!

The comment that contributes the most to the community discussion below (as judged by us) will get a 10th Anniversary Edition Walking Dead #1 in full-color SIGNED BY THE MAN, Robert Kirkman.