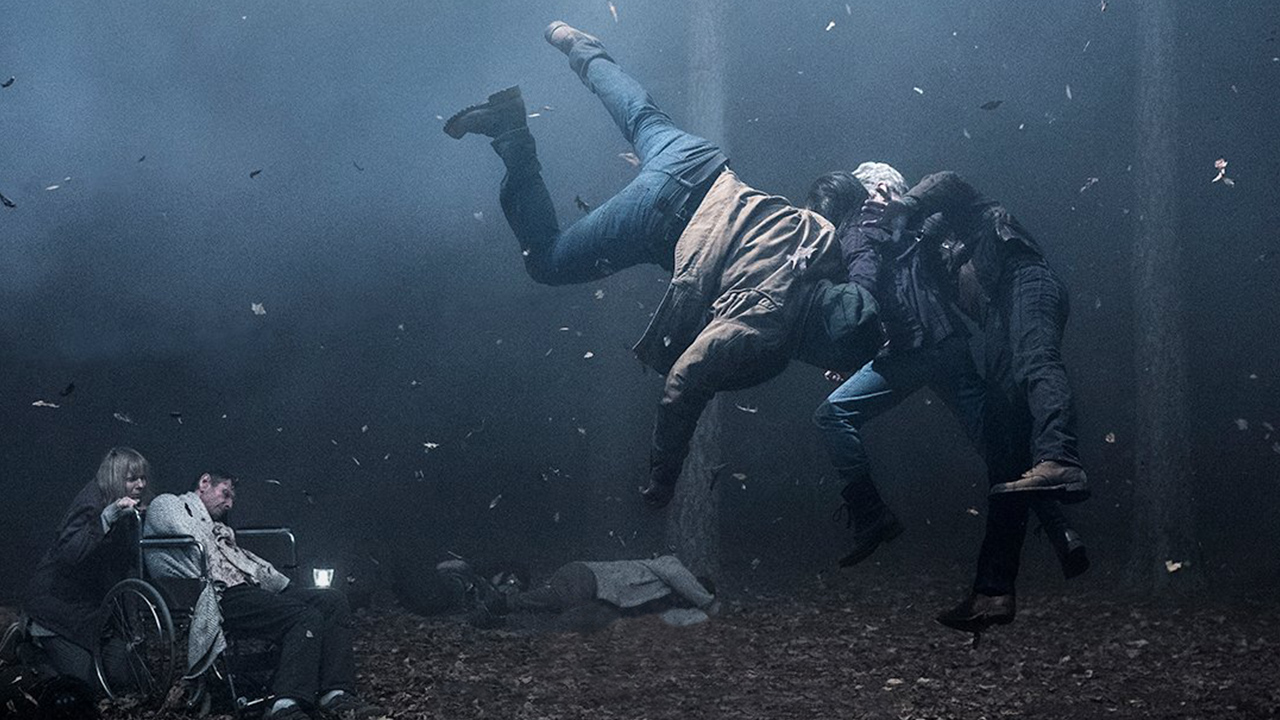 Reverend Anderson addresses his old congregation, reminding them this church is no sanctuary. “Devil or not, evil exists,” he warns. He tears out pages from the Bible, calling each scripture bullshit. As he does so, Kyle’s father Simon holds his own service.

Kyle reconnects with his father as his mother lays motionless in the room. Simon says he left to protect them but Kyle still feels abandoned. Simon says they don’t have time for a therapy session but Kyle continues to jab him. Simon grabs him, causing a reaction on Kyle’s arm. He tells Kyle that’s the beacon in him, and other beacons are coming soon. Kyle asks about the dead beacons he found in the junkyard, and before Simon can answer there’s a knock at the door – it’s Dakota.

Megan wakes up in a bed with an IV hooked to her arm – she’s terrified. Dr. Park walks in and shows her a sonogram of her baby, telling her it’s a girl. Meg says the deranged mid-wife told her otherwise, and that her baby could be one of them. Dr. Park acknowledges that none of his people have carried a baby to term but he promises he’ll try to protect her. He suggests she find a new “head space” before locking her in the room. She screams for her life on the other side as he takes a phone call, telling whomever it is he understands. Suddenly, he feels a migraine.

Dakota confronts Simon about his own doctrine, which promised only the pure would survive The Merge – that’s why they prepared all the weapons and supplies. He reminds her that was a strategy, and he’s going to fight with or without her. The following day Giles meets with Reverend and laments Rose’s death. Anderson comforts him and Giles suggests they find the people on Rose’s list.

Meg discovers her door’s unlocked so she ventures into the house. She finds Holly in the kitchen and tells her they have to go. Blake, who’s standing behind her, tells them they can’t. He gets Holly to grab tea and then threatens Meg he’ll kill her daughter the next time she tries something.

Dakota finds her people digging trenches and cutting down trees in the woods and cautions them Simon has lost his way and they can’t do this. They don’t believe her, so they continue their work. Elsewhere, Simon and Kyle arrive at the junkyard to immediately come under fire by Bob, who thinks they’re possessed. He recognizes Simon and Kyle grabs the shotgun from his grasp. He scolds Kyle for leaving and tells him Allison and Amber have been taken. Kyle tells Simon they have to go but Simon tells him to think, and asks him to close his eyes. He does, and Kyle sees lights. Simon tells him those lights will help save his family.

Dr. Park meets with a woman in a mansion who’s like Kyle and the other beacons. Park threatens her but she puts her hand on his, causing his black veins to pop and his skin to sizzle. She reveals that Sidney was trying to protect Kyle and Amber for the Merge, and says it’s his job to now do the same. Back in the junkyard Simon tells Kyle the beacons need to come together and fight the Merge. He explains how he killed Helen for drilling holes in the skulls of the beacons 30 years ago. Simon then asks Bob which beacon survived, since Kyle found one less body in the ground. Bob says he doesn’t know what he’s asking.

Bob takes Kyle and Simon to a nearby house and asks a woman named Emma to see Martin. She brings him out – he’s severely disabled from having a hole drilled in his head and subsequently shot by Simon 30 years ago. Kyle recognizes him from the town meeting, meaning he’s the beacon he’s been looking for. Bob explains Emma’s his sister and Martin’s his brother-in-law. Simon asks Kyle if he feels Martin’s dormant powers. “Imagine a dozen of us,” he says. Kyle puts his hand on Martin to feel his energy and then tells him about their struggle. Martin tries his hardest to form words and screams “You did it!” to Simon. They scream that they need him but Emma forces them to leave.

Giles returns to the police station to stock up on weapons and ammo. His copy buddy finds him and Giles confesses he killed Nuñez because she was one of them, and they need to pick a side. The Rev pulls up to the station with a van of the possessed tied up. They’re shoved inside and when the officer questions it Giles says, “We’re at war, a holy war and we’re under siege.” He agrees to side with the Rev and helps push them inside. Dakota shows up and tells Rev she might have had a change of heart.

Blake seizes up while talking to Holly – he hallucinates Kyle and Amber in the woods staring at him through the light. He crushes the glass he’s holding and Meg tells Holly to grab bandages. He tells Meg that he sees the end of his people and Meg suggests they take Amber with them to prevent that.

In a forest Simon tells Kyle he wanted to be there for him in his childhood and he’s sorry he wasn’t. Still, he says he figured this would bring everyone together again. The members of the lighthouse arrive along with Emma and Martin, who have decided to help. Blake drives Meg and Holly to Dr. Park’s house and warns them not to leave. He goes inside to destroy his things when Dr. Park arrives home. Blake tells him he doesn’t want to be a lab rat anymore and begins to strangle him. Park breaks free and tases Blake until he passes out. Meg breaks free from the car and drives her and Holly away as fast as possible. Holly yells at her mother for leaving Blake but Meg tells her they can only trust each other.

Lightning strikes in the forest – a storm is literally coming. Simon thanks everyone for helping him “finish this,” telling them they can have a world “purged from their darkness.” Allison and Amber show up, and Simon apologizes for abducting them. Amber tells her father they can fight together so they can go home.

A giant orb of light conjured by the beacons forms in the center and Simon tells them to “feel it.” He nods to one of the beacons, and that man slits his own throat as a sacrifice. Suddenly, everyone’s doing it – and Simon then slits Martin’s throat as Emma screams. Kyle demands to know what’s happening and Simon explains their blood will save millions. The blood of the beacons twists its way towards the light and Kyle realizes what he has to do. He tells Allison and Amber he loves them and then Simon tells him they need to sacrifice Amber. Kyle screams for them to stop and then Simon puts a knife to Kyle’s throat. Before he can do it Giles fires his shotgun nearby. Suddenly the possessed show up and it quickly turns into an all-out war between light and dark. Dakota, the Rev, and others show up to physically fight, shoot, and stab their way through the possessed. The dark energy fires shots into the ground as Amber tackles Simon off of Kyle, causing all of them to levitate.

The orb of light implodes and everyone falls to the ground. Dakota asked if that was the Merge, and Simon says it wasn’t. “They’re not finished with us yet.” The injured around them twist and contort and levitate in anguish. They run around covering themselves in blood. It’s quite the fucking scene. Elsewhere, Kyle’s mother Sarah wakes up from her decades-long coma.

Whew, what did you think of tonight’s finale? What questions do you have left about Simon, The Merge, and Sarah’s awakening? Let us know in the comments!