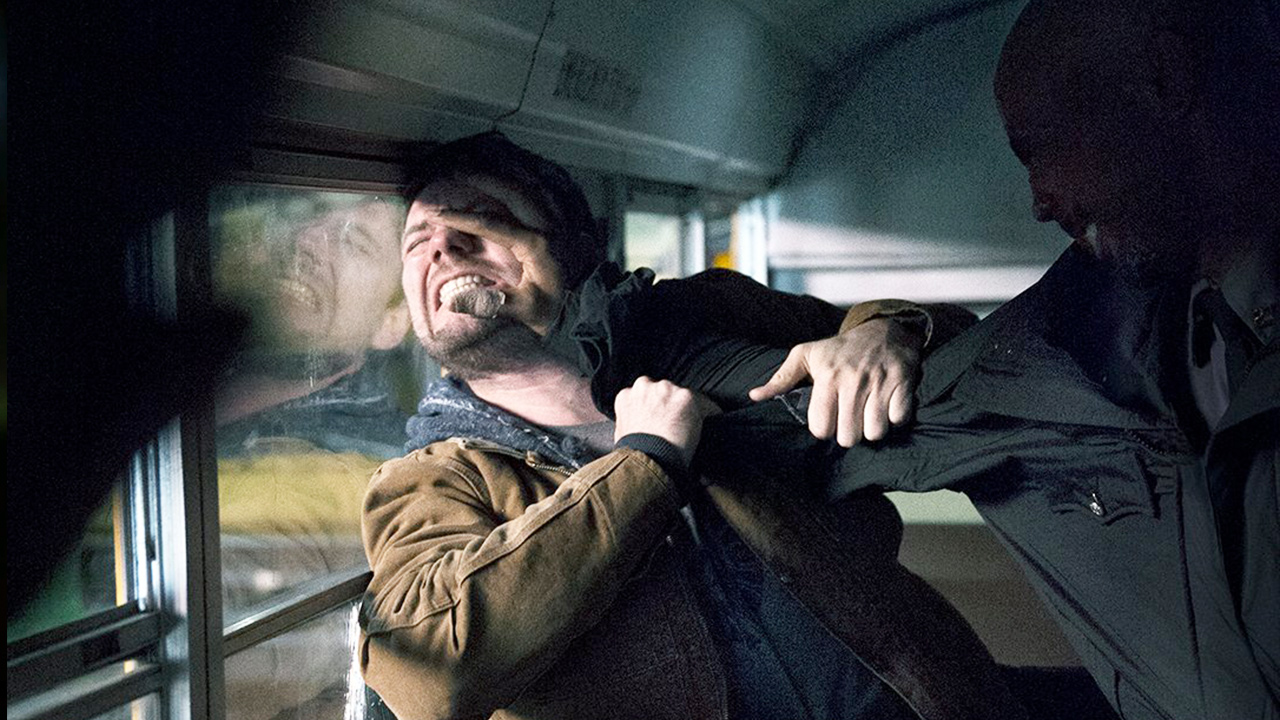 Flashback 30 years ago to Kyle’s father exorcising an entity from a tied-up woman. She tells him with a grin, “the great merge cannot be stopped” and bites her tongue off without wincing. Flash forward to Kyle in the same trailer examining the remnants.

Allison goes through the motions of her daily routine at the institution until a man confronts her that night. He asks about her daughter, calling her firefly, before running off. Meanwhile, Kyle visits Megan and asks her and Holly to move in with him but she refuses, confessing Holly believes Amber had something to do with Mark’s death.

Elsewhere, Giles is confronted by an angry mob at the police station – they’re upset about the police aren’t doing enough about the missing people in town. Giles reminds them a woman was murdered in her own home and he won’t let it turn into “a goddamn circus.” He heads to his office with his wife to discuss their next moves.

Kyle returns to his father’s old trailer to search for clues and finds a book of newspaper clippings. Meanwhile, Allison tells her therapist about the creepy man she encountered and says she’s ready to leave. Meanwhile, Owen visits Sidney and says he should give up Aaron to make for an easy transition. Sidney slams him against the barn and reminds him he’s a wolf among sheep and he’s going to coach Aaron up so whomever merges with him “will have a bright future.”

Reverend Anderson returns to the church in the woods and tells the woman she needs to work on her sales pitch. She undoes her shirt and shows him a red handprint burned into the back of her shoulder, indicating she used to be possessed. She explains the entities want to devour “everything we are.”

Megan’s foster parents apologize to Megan for failing her as parents and suggest they should have taken her to church more. Megan angrily reminds them of how them going to church so often allowed Donnie to rape her on a regular basis. Later, Owen announces to the town that he’ll hold a town meeting about the police’s inaction around town. Giles confronts him afterward and Owen promises him and Kyle he’ll take them to see Aaron if they help get him and Sidney off the streets.

Sidney peels off the dead skin from Aaron’s back reminds him that killing his mother doesn’t impress him because it didn’t serve a purpose. Elsewhere, Allison surprises Amber in the woods and tells her she escaped. Amber’s overjoyed to see her.

That night, Kyle, Owen, and Giles search for Aaron in Sidney’s barn, which is abandoned. Frustrated, Kyle and demand to know if they were set up. Owen reveals he’s actually one of the entities, but not necessarily an evil one. He sees Sidney as a maniac and asks Kyle to get rid of him. If he does, he’ll call off the other demons affecting him and his family.

Aaron visits Bob with his gun drawn and tells him Sidney wants to talk to him. Bob brushes off the threat until Sidney shows up and catches Bob’s hand in a tow truck pully. In a ton of pain Bob finally reveals that the woman changed people like Kyle’s father, making them more powerful. Satisfied, Sidney and Aaron leave him stuck in the tow truck.

Owen convenes the community in a town meeting and assures everyone that there are no monsters among them except the ones inside them. He then announces that Giles will step down from the police force for his inaction. Giles storms the podium, calls Owen a liar, and warns them these monsters are real and will destroy all of them if they don’t fight back. He quickly suffers a coughing fit and then collapses. Rose rushes up to help but Owen throws her off stage and drags Giles outside.

Kyle and Anderson get blocked by four possessed men but manage to fight them off and escape outside. Kyle finds Giles in a school bus looking like a caged animal. He breaks off a piece of the bus door as a weapon and stabs Kyle in the stomach with it. They wrestle on the bus as Sidney and Aaron sneak up on Owen and tell him they knows what he’s up to. Sidney promises he’s going to find the person like Kyle that makes his light brighter. He then gives Aaron the OK and he shoots Owen in the head.

Anderson, who was watching nearby, runs over to the bus to intervene with Kyle and Giles’ fight. Giles shoves him down and marches towards him but is suddenly chucked backward by an invisible force. Kyle grabs onto him as the two fly out of the bus and into the air. Megan runs outside and watches in awe as the two wrestle midair. Kyle finally gets his hand on Giles’ face and the entity shoots out of his mouth. The two of them slam into the ground and Megan rushes to Kyle’s aid to see him seemingly bleed out from his stab wound. She screams for help as Kyle loses consciousness.

What did YOU think of the episode? Tell us in our dicsussion!

Lauren Cohan Answers The Web's Most Searched Questions on WIRED