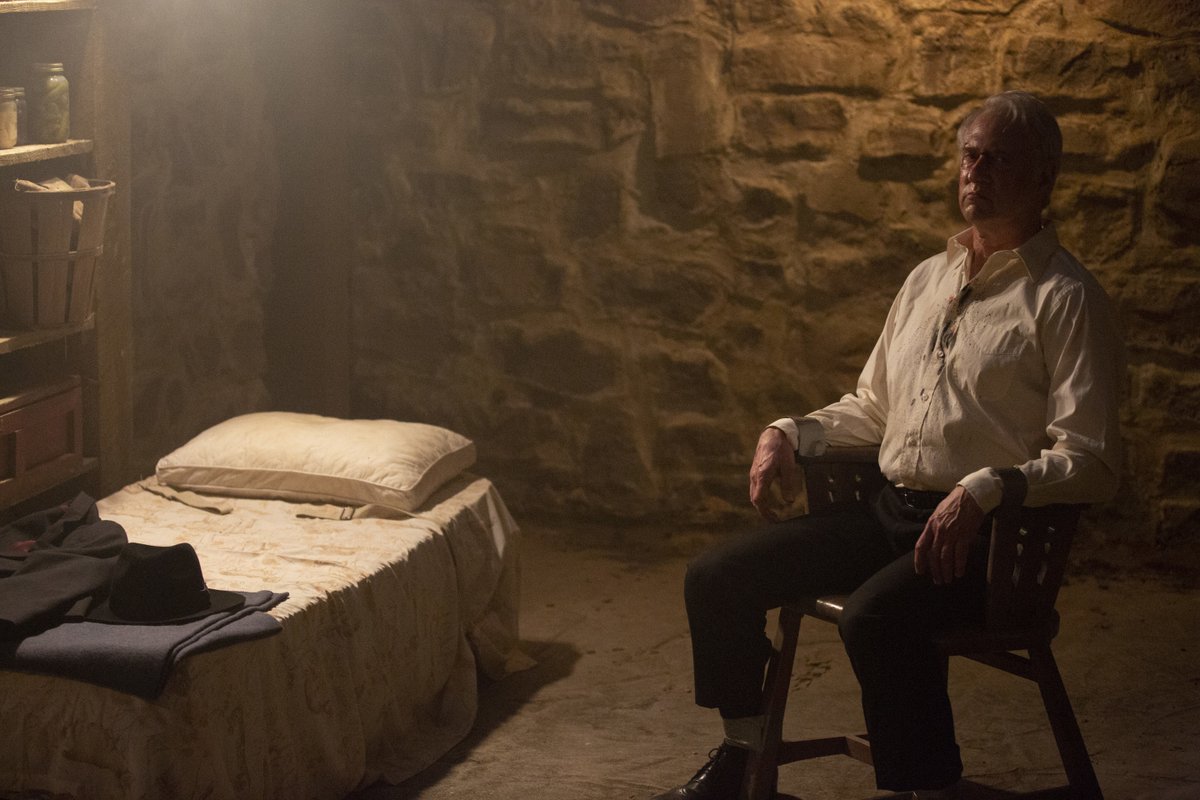 Blake Morrow, who brutally murdered his friends while possessed, gets administered lethal injection for his crimes. While the drug takes slowly effect Blake shouts that he saw “him” and warns that everything will soon end. He loses consciousness as Dr. Park looks on from the viewing area.

Kyle, who’s still bleeding from his stab wound, returns to the hospital and threatens a nurse to help him or he’ll put his bloody hand on her. Elsewhere, Reverend Anderson interrogates Dakota on her reasons for kidnapping Sidney. She explains she and her people were all infected by him and she doesn’t need the Rev meddling. Back at the hospital, the nurse stitches Kyle up and he offers to help her, but she says it’s too late and there’s nothing he can do.

Dr. Park, who just saved Blake from his death row injection, takes him to a diner to explain he wants to use him to find out why his people are dying. Blake’s angry he’s being used as a guinea pig but Park clarifies he’ll be an “associate” who can eventually live as long as he likes. Meanwhile, Kyle breaks into Dr. Park’s office and then into his mother’s hospital room – she’s not there. Officer Tuttle shows up to take him so Kyle puts his hands on his wrist. There’s no effect, he’s not possessed (shit), and Kyle gets taken down by the officer.

Anderson visits a tied-up Sidney and says he hasn’t seen Aaron in a while. Sidney says he was doing him a favor and the Rev thanks him, saying they’re a lot alike. He rips open Sidney’s shirt, takes out a knife, and carves a cross into his chest like Sidney carved a pentagram into his own.

Officer Tuttle drives Kyle to the junkyard to meet with Giles, who explains he asked Tuttle to look after him. Kyle shows him an old phone book his father kept that listed who were and weren’t possessed. He suggests they gather those left in the town not possessed to help fight those who are. Bob arrives and shows them the arsenal he’s collected to fight the demons. Kyle says that’s not the way to fight them but Giles says he needs to protect himself.

Blake heads to a bar to question a mildly-possessed bartender about Kyle and Anderson’s whereabouts. She says she hasn’t seen them but Blake grabs her and asks again; she warns it’s too dangerous to go after an outcast. Shortly after Blake follows her into the bathroom and breaks open the stall door and asks where they are one last time.

At the lighthouse Megan tells Dakota that she’s pregnant but it feels different than her last child. Dakota assures her she’ll be fine and that they have a midwife to help down the road. Nearby, the Rev continues to taunt Sidney, who tells him that the church got demons “half right” and they’re responsible for all demonic occurrences in history (including Christ himself).

Blake shows up at Kyle’s house to ask Megan where Kyle and the Rev are. Meg asks if he was possessed and Blake says yes, leaning HARD into his victimhood. Meg tells him Kyle left town and Blake asks where exactly he went. At the junkyard, Bob digs up an old van full of bodies and tells Kyle that Helen was killing beacons to steal their light. He explains Kyle’s father finished them off as a “mercy” so they wouldn’t draw more demons to town.

Megan returns to the lighthouse with Blake trailing behind. One of the members, Oscar, asks who he is and Megan explains he used to be one of them. Dakota returns to the shack and is furious to discover Rev locked himself inside with Sidney. Blake approaches Holly and creepily asks about Kyle’s whereabouts. At the same time Kyle arrives at the lighthouse to look for the Rev and is surprised to see Megan there. Dakota tells them they need to come with her.

Dakota takes them to the cellar – Rev finally opens the door when he hears Kyle’s voice. Dakota storms in to find Sidney with the cross carved on his chest. Blake continues to bond with Holly, who reveals that her mother lies a lot, like about her morning sickness. That night, Megan meets with the lighthouse’s midwife, who offers her a vitamin. She refuses but then gets dizzy and notices her tea might have been spiked by the midwife right before collapsing.

Elsewhere, Giles and Rose hear a noise outside their home during dinner. Giles rushes to investigate and finds Officer Nuñez in his yard. She threatens him and draws her gun but Giles shoots a mine by her feet, which sends her flying. She shoots at his house towards Rose but Giles shoots her in the neck, killing her.

Meg wakes up in the trailer to the midwife preparing some sort of abortion tool. Meg attacks her and the two wrestle until Blake busts in. The midwife tells him he’s still plagued by the demon so he strangles her until she’s dead. Back in the cellar Sidney pleads with Kyle and the Rev to help him change the world. Kyle tells him about the junkyard grave and Sidney clarifies that Helen drilled holes in their heads to strip the humanity from them. Sidney then coughs up a lot of black goo.

Dr. Park meets with the council at the diner to tell them Sidney’s been blowing smoke up their asses and they should listen to him instead. He says “FUCK The Merge” and suggests they crawl out of the shadows and go in attack mode. They’re not on board – and Park tells them he had a feeling they wouldn’t be. He walks out as the council foam at the mouth and die. Elsewhere, Bob destroys the graveyard van while Sarah Barnes lays in a bed with a older-looking man staring at her.

What did YOU think of this week’s explosive episode of Outcast? Tell us in our comments!