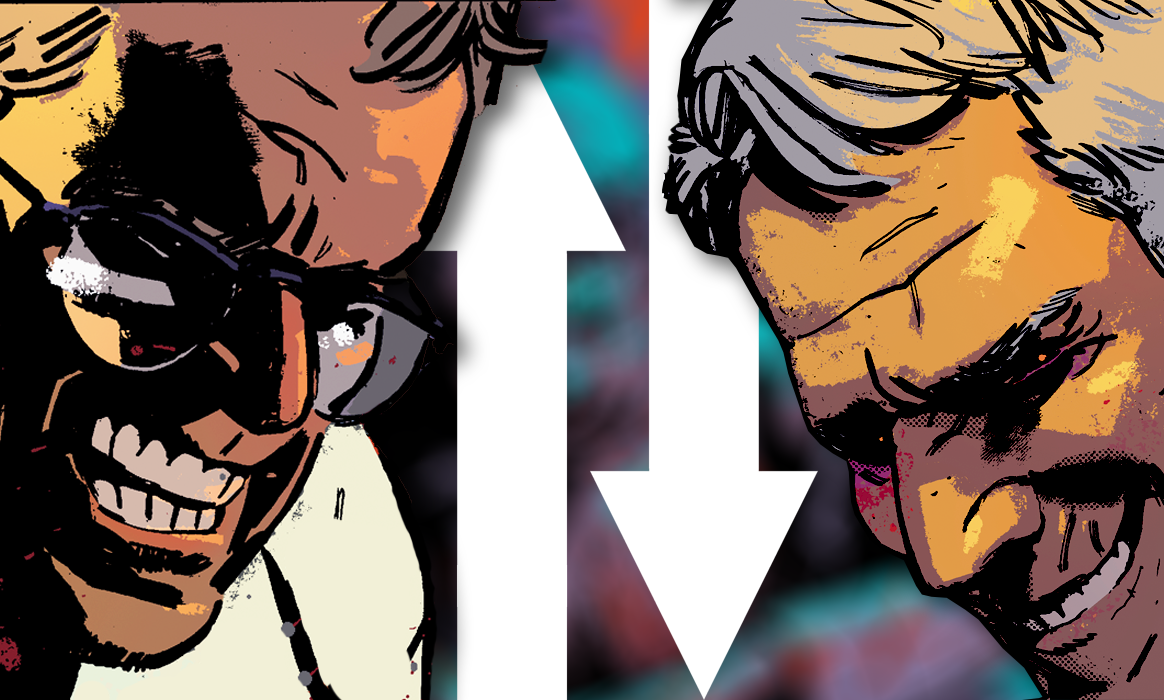 WHEW, what an explosive way to kick off the new year! This month’s issue might have been the most intense yet, and we’re just getting started! Below we re-ranked the characters based on who holds the most and least power in the series. The rankings fluctuate with each new issue so you KNOW crazy changes abound. (WARNING: Massive SPOILERS ahead, proceed with caution).

Well well well! After issues of build up, chest carving, and sh*t-taking, Reverend Anderson finally put his knife where his mouth is and KILLED SIDNEY! This was no ordinary kill, either. He carved him up as an appetizer, stabbed him for an entree, and gutted him for the cherry on top. Felt good, didn’t it Rev? Although Anderson killing our main antagonist places him at the top of our rankings this issue, Sidney may have been angling towards the bigger picture when he warned, “You’re not going to stop there…not after getting a taste.” God (or whomever) only knows what the Rev will do next. Also, if Kyle and Giles return to this gruesome scene chances are it’ll look like:

Kyle dropped from the top spot this issue because of two things: 1) Reverend Anderson, not Kyle, took out his biggest enemy and 2) Kyle fell prey to a bogus claim his daughter was in danger. We get it, Amber really COULD have been in danger; but it was such a thinly-veiled tactic by Sidney that it’s frustrating to see Kyle fall for it while his nemesis is in his possession (pun not intended). Still, Kyle has *He-Man Voice* THE POWER to exorcise these demons and might be the only hope his town has at eradicating this danger.

Chief Giles is tired of Sidney’s shit, which is why he clocked him in the face Jack Bauer-style. Despite this, Sidney gave him some valuable insight about his wife, who has apparently been merged for quite some time. We’re not sure how that can help Chief Giles, but the more he knows the better it is for the town.

FINALLY! After noticing strange things happening with Kyle, her daughter, and now the creepy Ms. Warner, Allison is finally getting woke to her surroundings. Although it WILL take time for her to realize the full extent of the strangeness, Allison admitting SOMETHING is happening is a giant leap forward for her and her family.

Megan was barely in this issue so her bump up is only due to others plummeting in the rankings. However, it’s always fun to see her curse out her husband’s former colleagues.

Similar to Megan, Mark was not a huge factor in this issue. He DID however act defiantly against his cop buddies when they accused him of harboring Kyle.

As evidenced in the show, there is more to Amber Barnes than meets the eye. Her touch on Ms. Warner’s hand clearly bothered the magnet school enthusiast and caused her to leave. She may seem innocent, but people like Ms. Warner should know better than to mess with Kyle Barnes’ daughter.

The possessed citizens of Rome took a big hit this issue when their fearless leader Sidney was brutally murdered by Reverend Anderson. Not only that, but Ms. Warner proved to be creepy enough to scare Allison and Amber away from joining her “magnet school.” It remains to be seen how these people will act without Sidney, so until we find out we’re knocking them back a few spots.

Although we can’t reveal the identity of the man who showed up by Sarah’s bed at the end of the issue, we can say he’s someone worth keeping an eye on. He clearly has a history with the Barnes family and based on what he said, seems to be a threat to them. “Things have to get worse before they get better,” he warns. Is he merged? Is he related to Kyle? Could he be the next Sidney? Time will tell.

Sidney finally pushed the Reverend too far. After carving a pentagram into his chest, alienating him from his community, labeling his life’s work a lie, and taunting him about his son, Reverend Anderson snapped and shut him up (possibly) once and for all. It may be foolish to keep him in the rankings at all, but with all these merged souls who knows if this is actually is the end of Sidney.

How did you feel about our new rankings following Issue #24? Do you think Sidney will return? Tell us in the comments!

Outcast #24: "No Turning Back" Reader Discussion