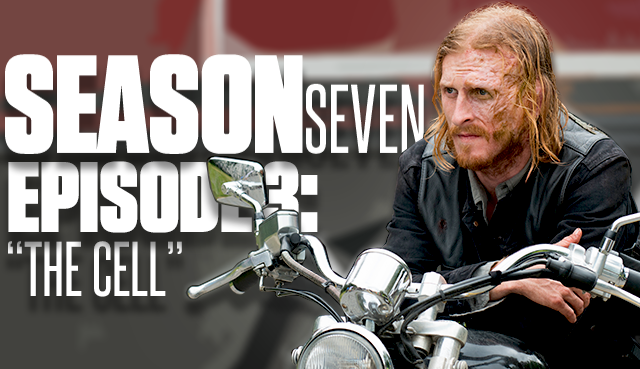 The episode opens with Dwight bullying half a dozen poor souls around the Savior community just to make a sandwich. Maybe this episode won’t be as torturous as people said! We pan out from the sandwich to see tied-up slaves corralling pinned-up walkers in a junk yard. Yike, welcome to hell!

We see Daryl holed up in a dark cell being subjected to Guantanamo tactics – isolation, hearing the same song on a seemingly endless loop, and hard labor. Dwight takes Daryl to the doctor’s office, where his former wife Sherry is waiting. She tells him “it’s negative,” possibly referring to a pregnancy test. Later, Dwight takes Daryl back to his cell where he promises he’ll one day have to surrender to Negan. 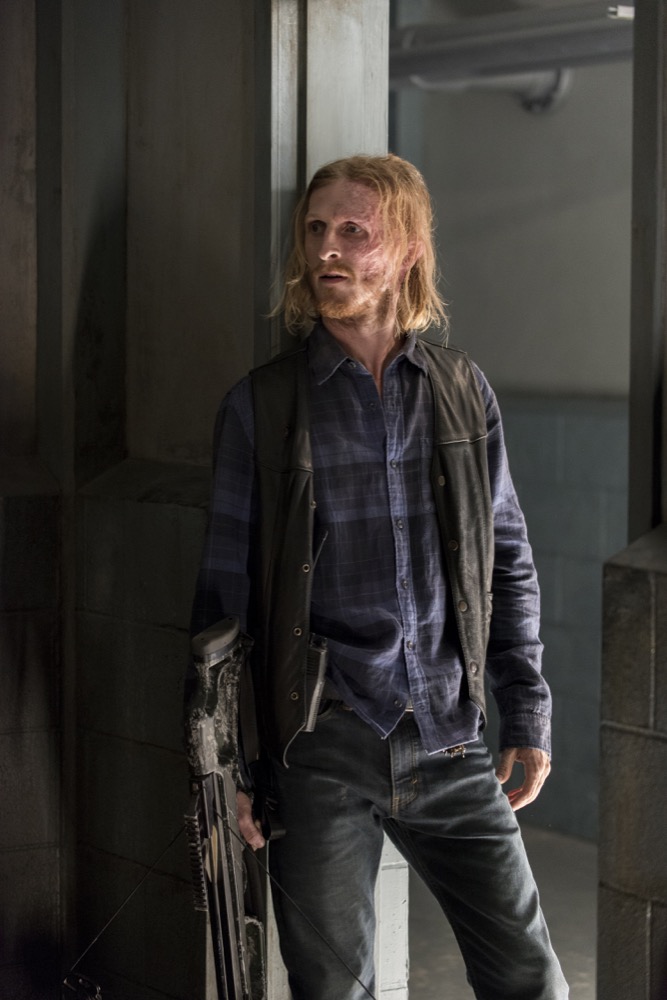 Negan rewards Dwight for getting to Daryl by offering up a woman of his choosing. Dwight declines and reasons he hasn’t finished the job with Daryl yet. They receive a call on the radio and Dwight heads out to investigate. Meanwhile, the substitute Savior brings Daryl food and forgets to lock up. Daryl immediately sneaks out and runs into Sherry, who warns him to return to his cell or things will be worse for him. He doesn’t listen and makes a break for the motorcycles outside.

The Saviors surround him until Negan arrives. He asks the Saviors around him who they are and they all confidently respond, “Negan.” The real Negan tells Daryl his life could have become “so much cooler” if he obeyed the rules. He says he could either be dead, work for him and wish he was dead, or live like a king under him. Negan pretends to hit him with Lucille but Daryl doesn’t flinch. “You don’t scare easy,” he observes with a smile. Negan leaves as the rest of the Saviors descend on him to beat him. Later, Daryl’s visited by Sherry again.

Outside the walls Dwight maneuvers his way around a walker-filled highway until he comes across a former Savior, Gordon. Dwight points a gun at him and instructs him to return to The Sanctuary. “I can’t go back,” Gordon responds defiantly. He argues for an uprising since Negan is vastly outnumbered. Dwight counters, “We were losing…now we’re not.” Gordon laughs, falls to his knees, and reminds Dwight again that it’s all pointless. Dwight threatens to ruin the lives of everyone he knows and Gordon finally breaks begins walking again. Dwight, who’s clearly conflicted, shoots him in the back of the head. 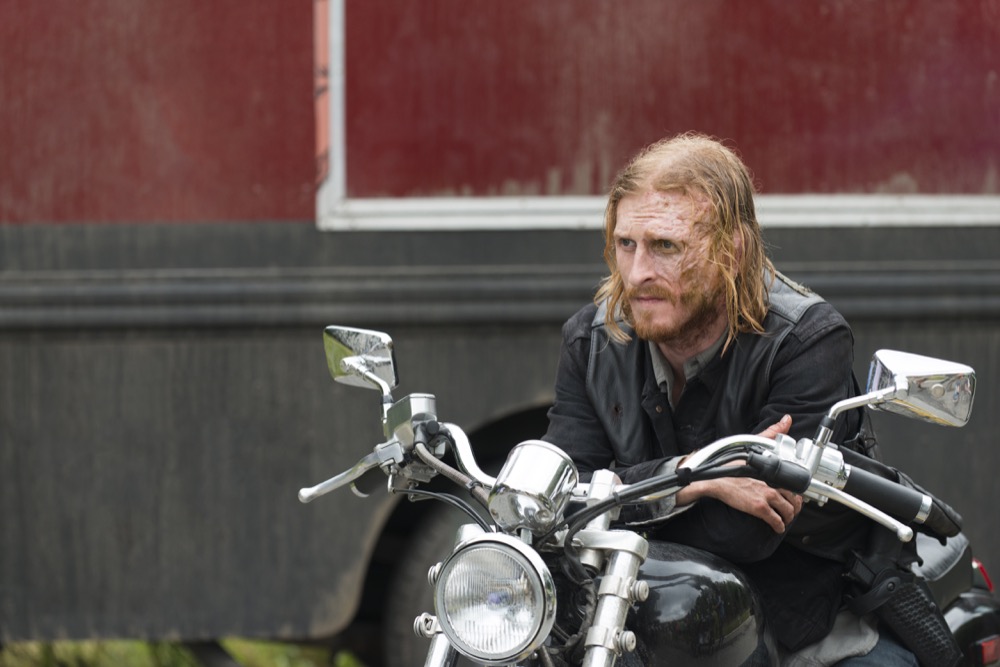 Later Dwight and Sherry share a smoke; she tells him Negan’s treating her well. It’s obvious neither of them are happy but they both agree it’s better than being dead. Dwight visits Daryl and tells him, “You got your friend killed, I got Tina killed, don’t pretend like you don’t know the score.” Daryl throws his sandwich at him and Dwight tells him he’s lucky that Negan likes him. Dwight puts the polaroid of Glenn’s head on the wall and plays a new song, Rob Orison’s “Crying,” to which Daryl cries to.

The next morning Dwight brings Daryl to Negan’s suite. Negan explains how Dwight and Sherry started from the bottom in the point system until they broke out of The Sanctuary. He goes on to say he eventually located them and Sherry made a deal that she would marry Negan if it meant keeping Dwight alive. So, Dwight instead got the iron to his face, Negan married his wife, and now Dwight is one of his top guys. Negan tells Daryl he can also be that guy for him if he can answer the “Who are you?” question. He answers with, “Daryl” and Negan sends him back to his cell. Daryl tells Dwight he understands why he took the medication. “You were thinking about someone else…that’s why I can’t,” he says. Dwight heads outside and sees an undead Gordon in the yard. 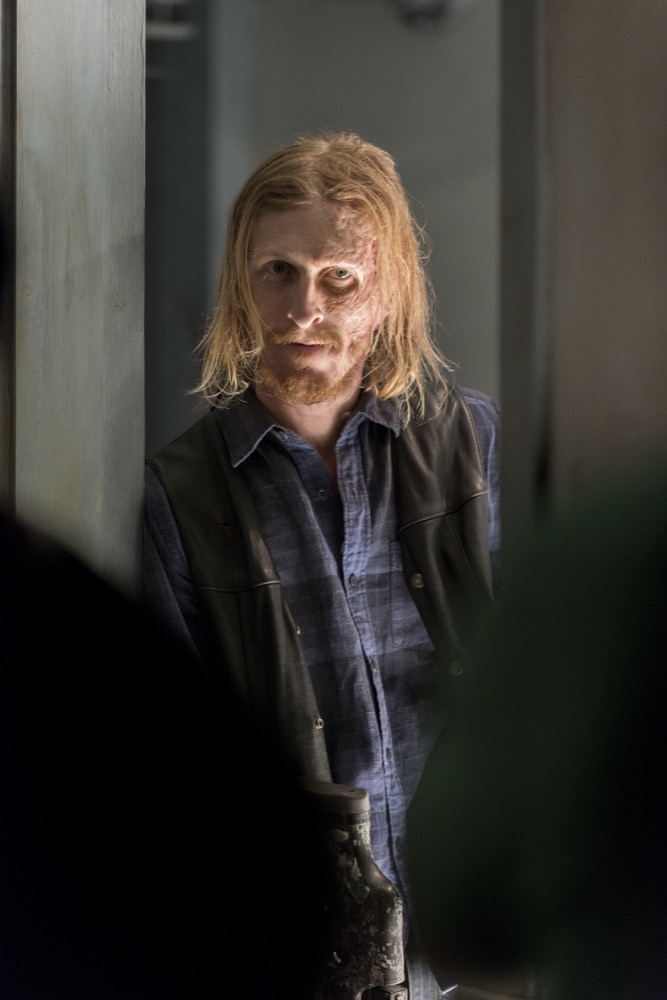 Will Daryl ever break out of The Sanctuary? Do you think Dwight’s having second thoughts about being Negan’s right-hand man? Tell us in the comments below!