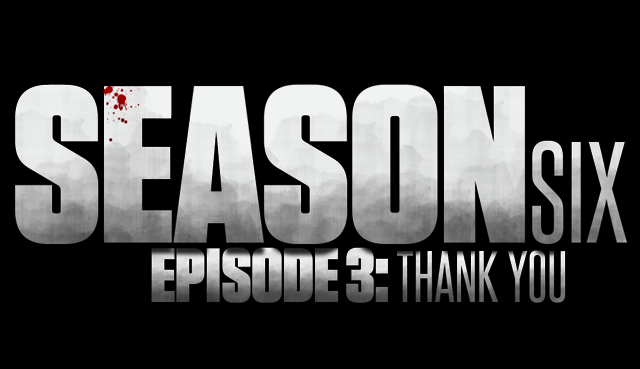 Back to where we left off in the premiere: Rick and the gang sprint through the woods to escape the hoard of walkers headed toward Alexandria. Rick quickly devises a plan involving placing the herd back on track with the RV. When Michonne and Glenn question his decision to go alone, he reasons, “(The Alexandrians) are not all going to make it.” Basically, they’re screwed without them. Suddenly, a walker takes a bite out of one of the Alexandrians that earlier questioned Rick’s motives (karma’s a fast-acting bitch). Michonne puts him out of his misery as the horn stops. 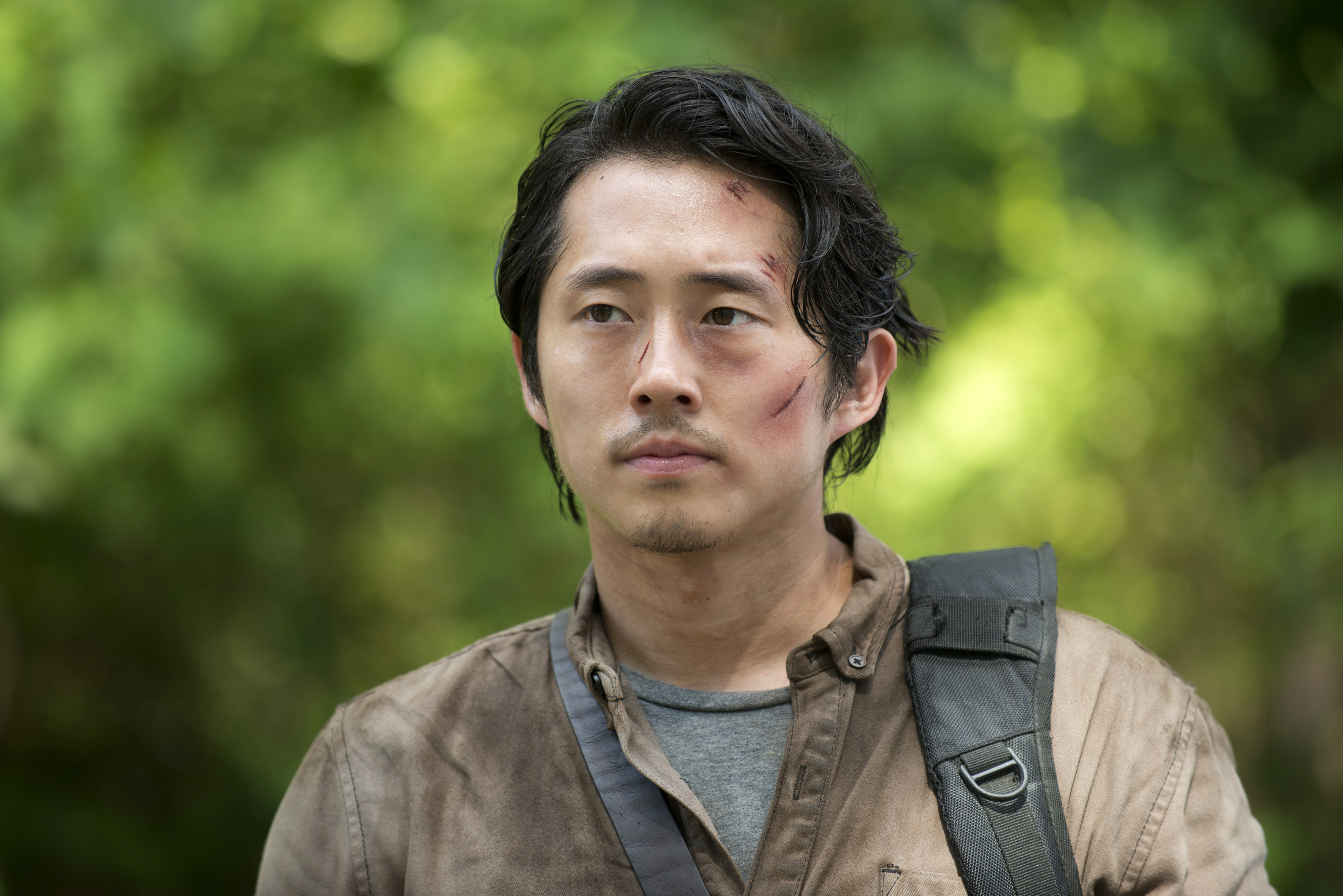 Michonne, Glenn, and Heath lead the others in taking out walkers Age of Ultron-stlye in the forest. Sturgges (AKA Worthless Alexandrian #147) accidentally shoots Scott in the leg and he and his dumb hat run away. After saving Scott, David ALSO gets bitten by a walker from behind. After he kills it he concedes, “I know what it means…We have to keep moving.” Ignorance really IS bliss! Meanwhile, to the chagrin of Sasha and Abraham, Daryl improvises and drives off to help Rick. STAY SAFE DARYL, FANS LOVE YOU TOO MUCH. 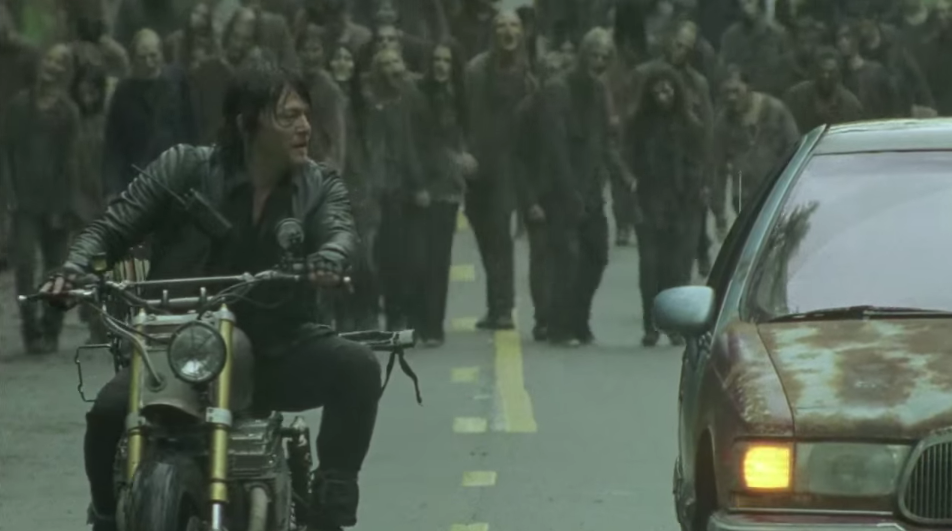 On the road now, a doomed David tells Michonne his backstory and how he wants to say goodbye to his wife before he turns. The group reaches an abandoned town where Nicholas had previously left his crew to die (back when Nicholas sucked). They enter an alley where a group of walkers feeds on Sturgess, which mentally triggers Nicholas into his dark past. Nicholas snaps out of it just in time to lead them into an abandoned pet store to hide. Glenn proposes burning down a building for a distraction but Michonne objects. “You have a wife, Glenn.” “That’s why I’m doing this,” he retorts. Nicholas decides to join Glenn to lead the way to the feed store they’ll burn. Glenn promises if they get separated he’ll SOMEHOW show them he’s OK. Glenn radios Rick to catch him up on the plan as Rick goes full Carol on three walkers. No really, he grabs a machete out of one of their faces and uses it to kill the rest. It was incredible. (ALSO Glenn said, “Good luck, dumbass.” Shout out to that Season 1 reference from their first meeting)!

Annie and Scott ask Michonne and the others to leave them behind because they’re slowing them down. “We don’t leave people behind,” Heath shoots back. After trading dirty looks, Michonne asks Heath if he has a problem with her. He reminds her Rick said the Alexandrians wouldn’t all make it but Michonne would. Michonne scolds Heath about not being as experienced as Rick’s group. “You haven’t been through it…Have you ever been covered in so much blood you didn’t know if it was yours, the walkers, or your friends? Then you don’t know.” Take THAT, well-intentioned Heath! Just goes to show you don’t have to be in a restaurant to get served. Back to Glenn and Nicholas’ mission…they both come upon a walker stuck under a car who Nicholas seemingly let die. Now that he’s changed his ways, Nicholas puts the walker out of its misery and is overcome by emotion. IT’S OK NICHOLAS, YOU’RE NOT THAT GUY ANYMORE. 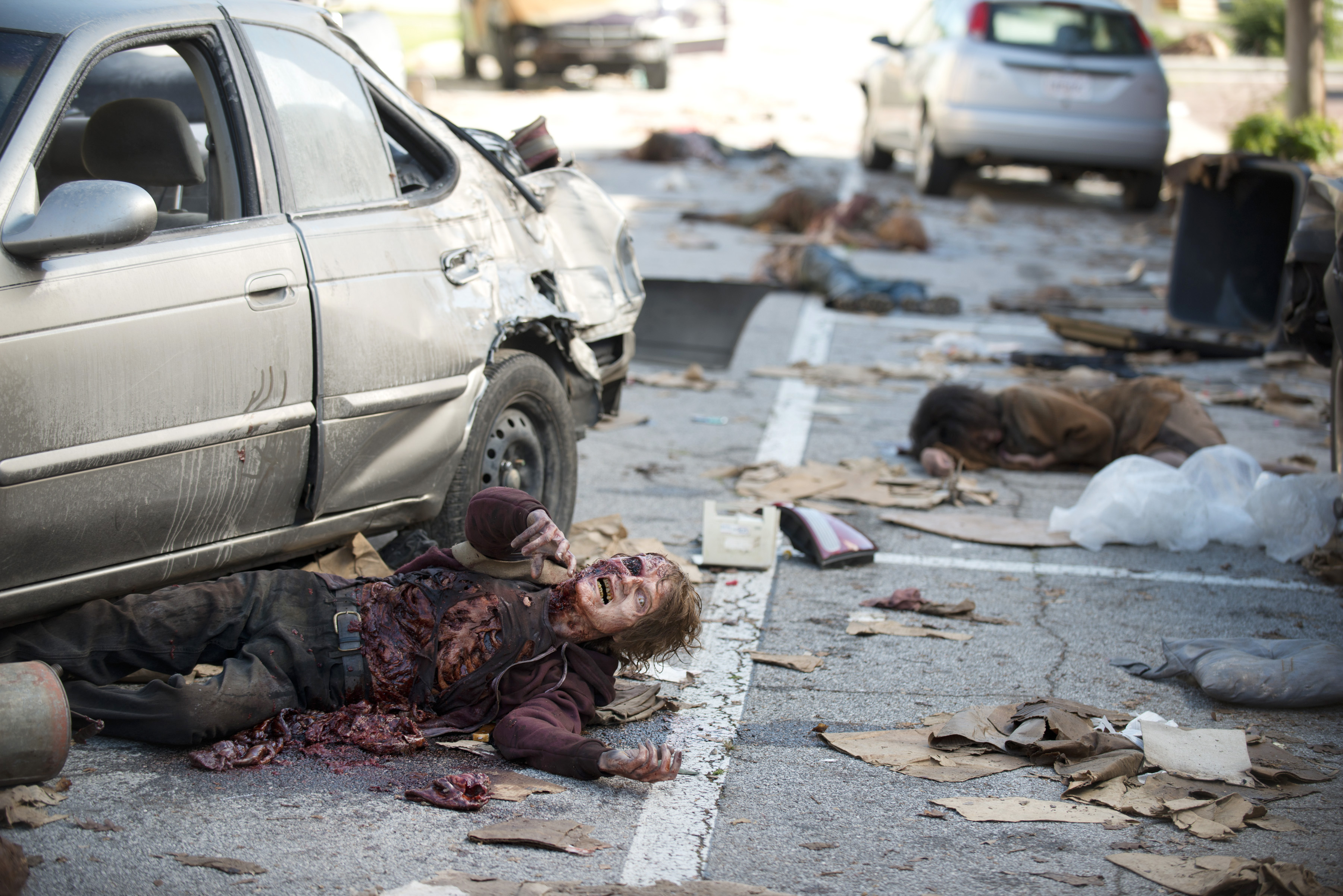 Back to the pet store! Distant machine gun fire from Alexandria (wonder what’s going on there) draws away the walkers outside of the store. Knowing he’s doomed, David writes a letter to his wife and hands it to Michonne, who gives it back and writes, “You’re getting home.” Surprise! There’s walkers in the back of the shop, who Michonne easily takes out. Unfortunately, the noise attracts the attention of a sizable walker group outside. Michonne and the others break out of the pet store, where Annie falls and becomes consumed by the walkers. Michonne, Heath, and Scott make it over a gate as walkers surround them. Unfortunately, David’s not so lucky and gets his face torn apart through the fence. Michonne and the others, now a MUCH smaller group, are forced to leave. 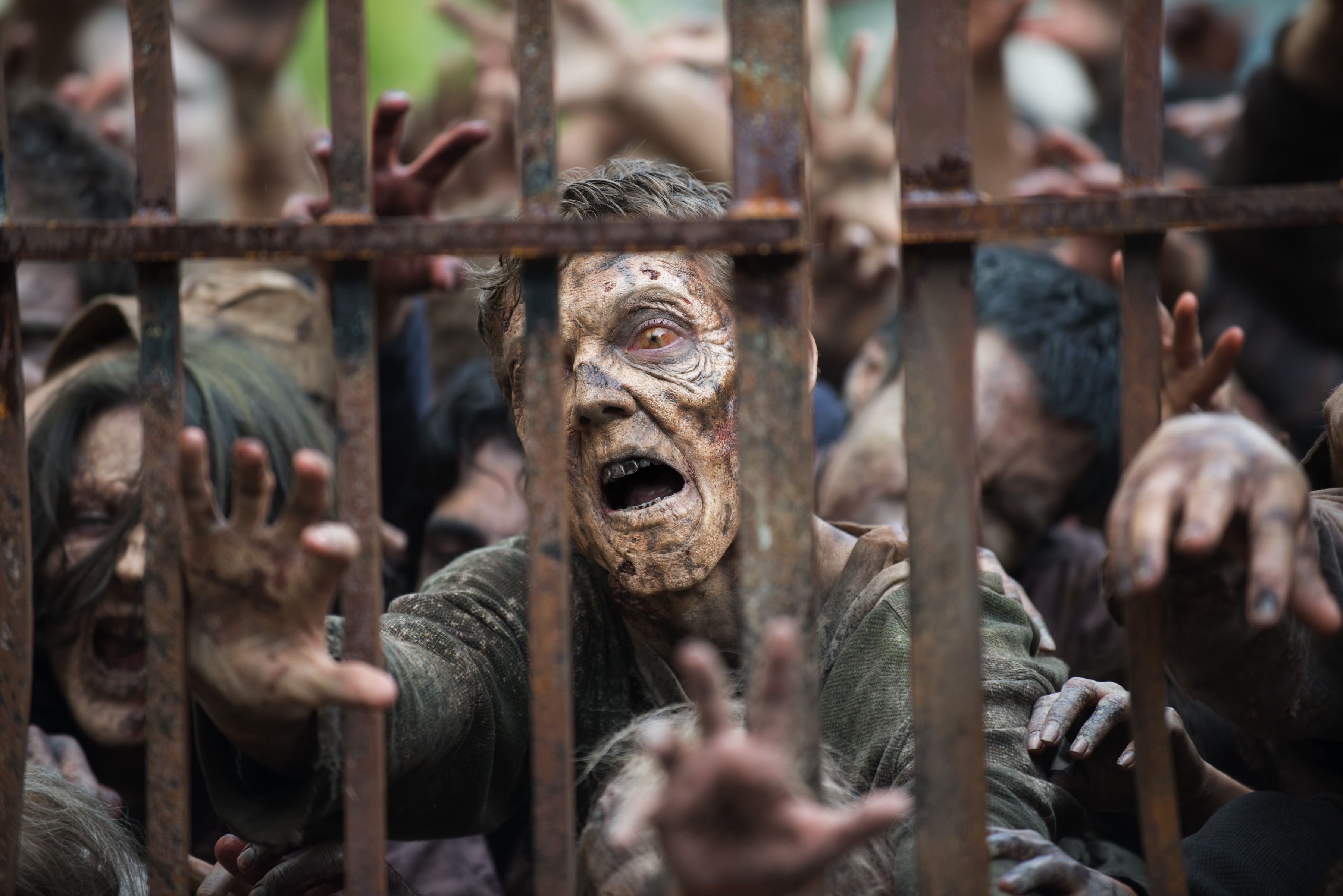 Meanwhile, Glenn and Nicholas also find themselves surrounded by walkers. Despite their best efforts to take them on one by one, they’re forced to retreat on top of a dumpster, trapped. Nicholas, who’s in a state of shock by their situation, tells Glenn “thank you” before placing a pistol to his head and PULLING THE TRIGGER. His sudden death causes him and Glenn to BOTH FALL OFF OF THE DUMPSTER INTO THE WALKER HERD. THE WALKERS GRAB AT HIS CHEST AND PULL OUT HIS INTESTINES. NOOOOOOOOOOO!!!! 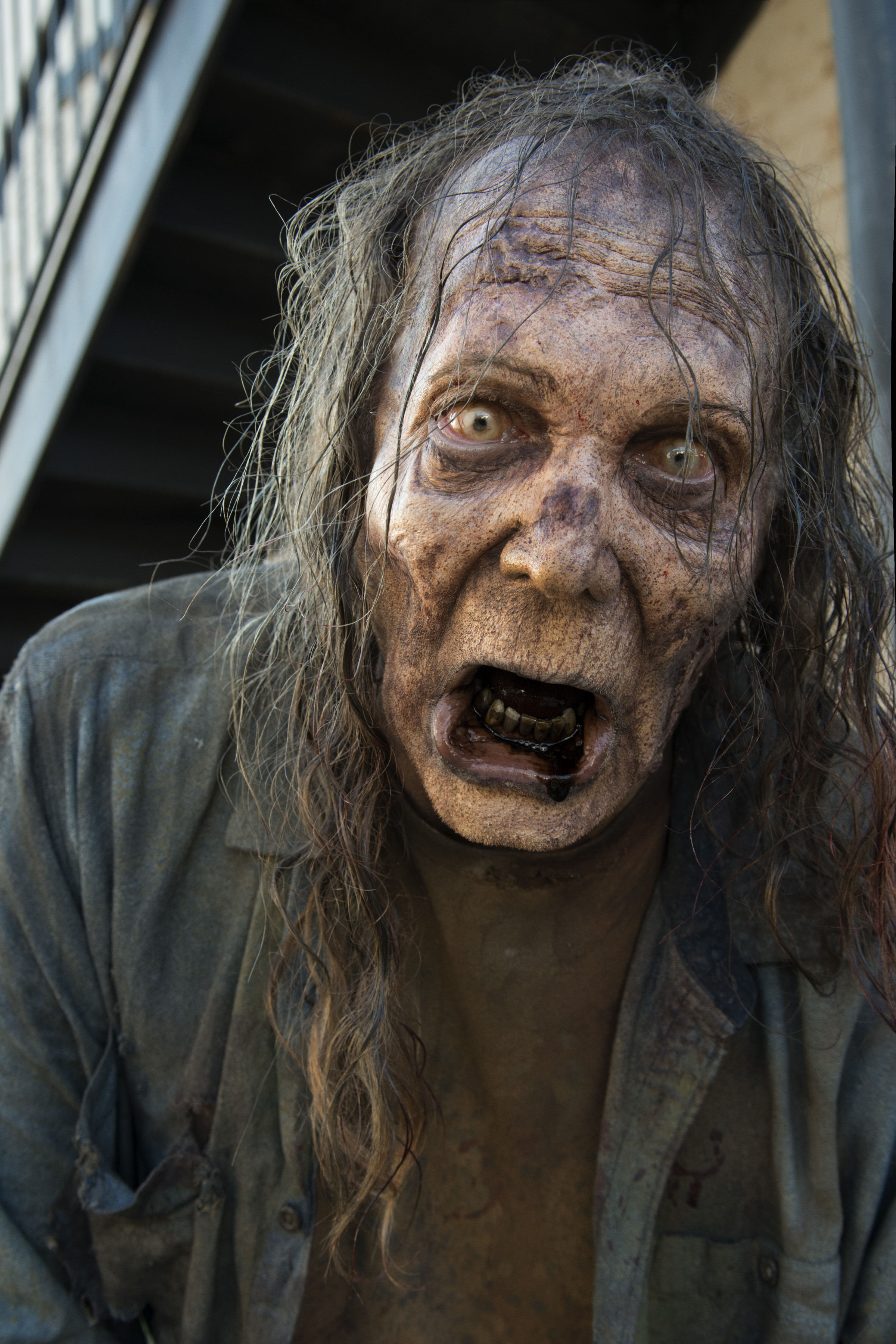 WHAT’S THE POINT IN EVEN FINISHING THIS RECAP?! OK, FINE. *Deep breath* Michonne and Heath help Scott through the forest…WHY DOES SCOTT GET TO LIVE. WHY DOES LIFE CONTINUE TO HAND OUT DISAPPOINTMENT AFTER DISAPPOINTMENT?! SORRY, I CAN DO THIS. Ugh, so OK, Rick, who spent the entire episode on the run and took the RV by the makeshift walker death fence contacts the others to tell them of his plan. He hears gunfire (The Wolves) from Alexandria but there’s nothing they can do. Suddenly, two of the Wolves (that Morgan let go in the last episode) break into the RV and attack Rick. He shoots and kills both of them along with the rest outside. Michonne, Scott, and Heath make it back to Alexandria, where several buildings are burned down and the watch tower is cracked. 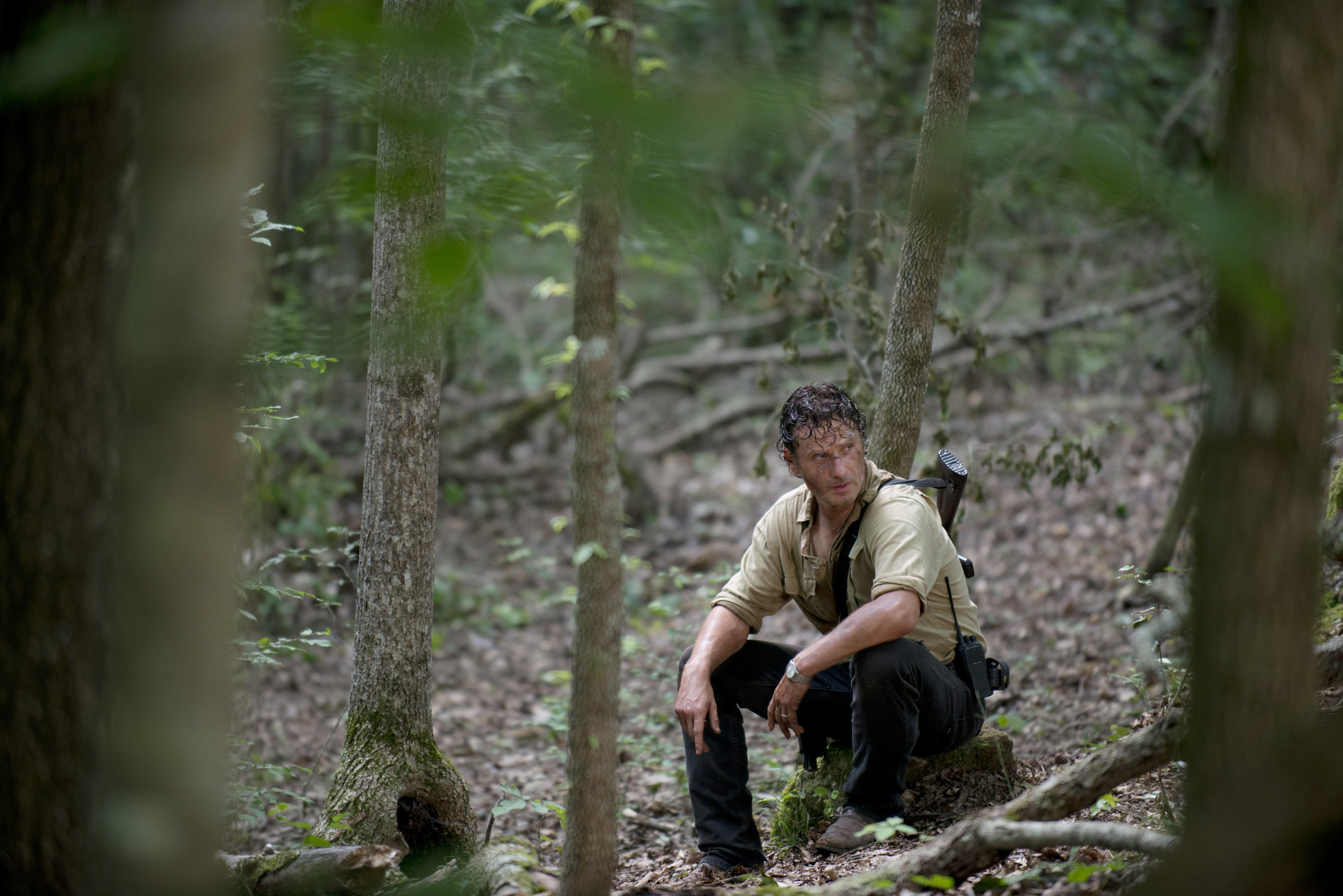 Daryl meets back up with Sasha, Abraham, and the dead parade of walkers. Suddenly, the RV Rick’s in becomes surrounded by walkers as his RV refuses to start. An entire herd crosses the field and overtakes the RV…