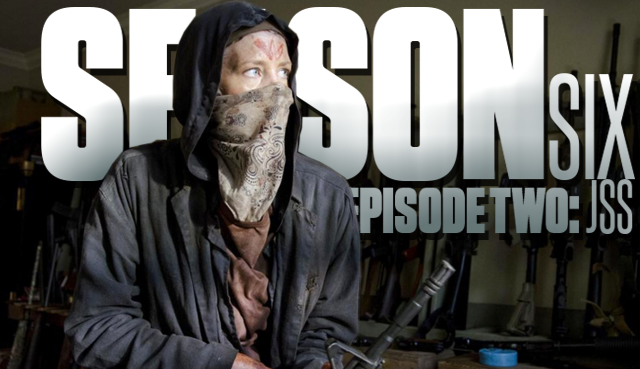 Season 6 is RIPE with flashbacks and this episode is no different. FLASH BACK to Enid’s backstory: walkers kill and eat Enid’s oblivious parents as she stares on helpless from the car. Frightened and on her own, Enid is forced to survive by stabbing walkers, writing “JSS” everywhere she can (we’ll get to the meaning later), and eating raw turtle meat straight out of the shell (gross). She EVENTUALLY stumbles upon Alexandria, where they take her in as one of their own. 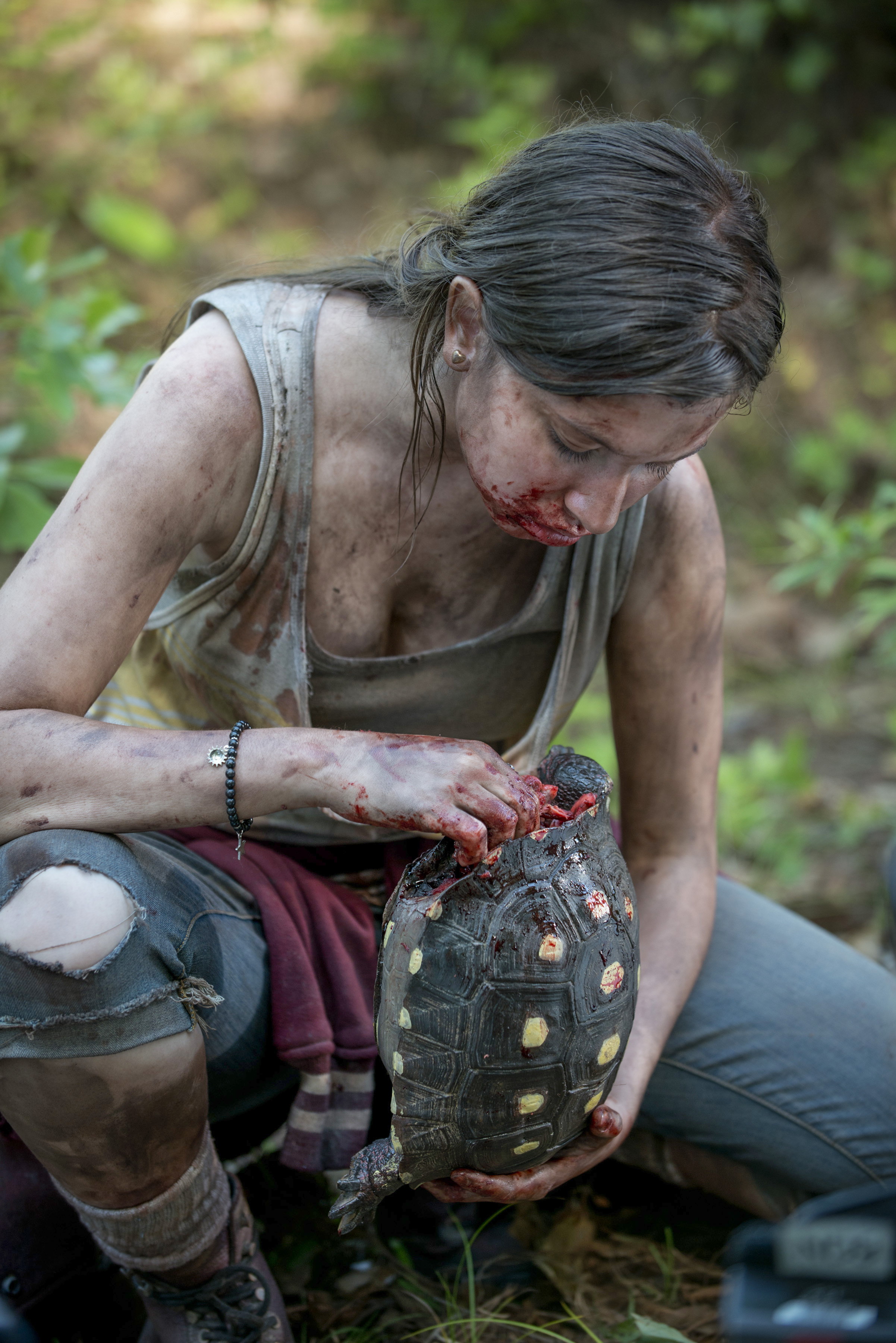 Programming Note: This episode will NOT be in black and white but the events WILL occur during Rick’s big parade plan from the premiere. So unfortunately, there will be no Rick, Daryl, Sasha, Abraham, Michonne, Glenn, Maggie, Heath, Nicholas, or Carter (because he’s dead). Despite this, it’s still one of the craziest episodes to date. Now, back to the recap:

Despite a parade of walkers being corralled close-by, everything is seemingly normal in Alexandria. Carol plays the innocent homemaker-type with the other Alexandrian women (she even passes out recipes and smoking advice)! Meanwhile, Jessie tries to connect with her son Ron via a haircut and he tries convincing her Rick is dangerous (didn’t he save your life last episode?). Meanwhile, Maggie teaches Deanna about growing crops once the walls go up and reminds her to stay strong. Wow, everything is so WONDERFUL! Nothing could POSSIBLY go wrong, right?

NEW CHARACTER ALERT: Meet Denise Cloyd, Alexandria’s new doctor (from the comics)! Denise has a background in psychology and SORT OF attended med school (she can perform basic nursing duties but surgeries…who knows?! Eugene questions her qualifications (who better to do that?) but Denise admits, “I’m all this town’s got.” Father Gabriel apologizes to Carl for the damning things he told Deanna about the group and asks for help in learning self-defense. Carl reluctantly agrees and notices Ron and Enid embrace close by (someone call Nick Jonas because Carl is JEALOUS). 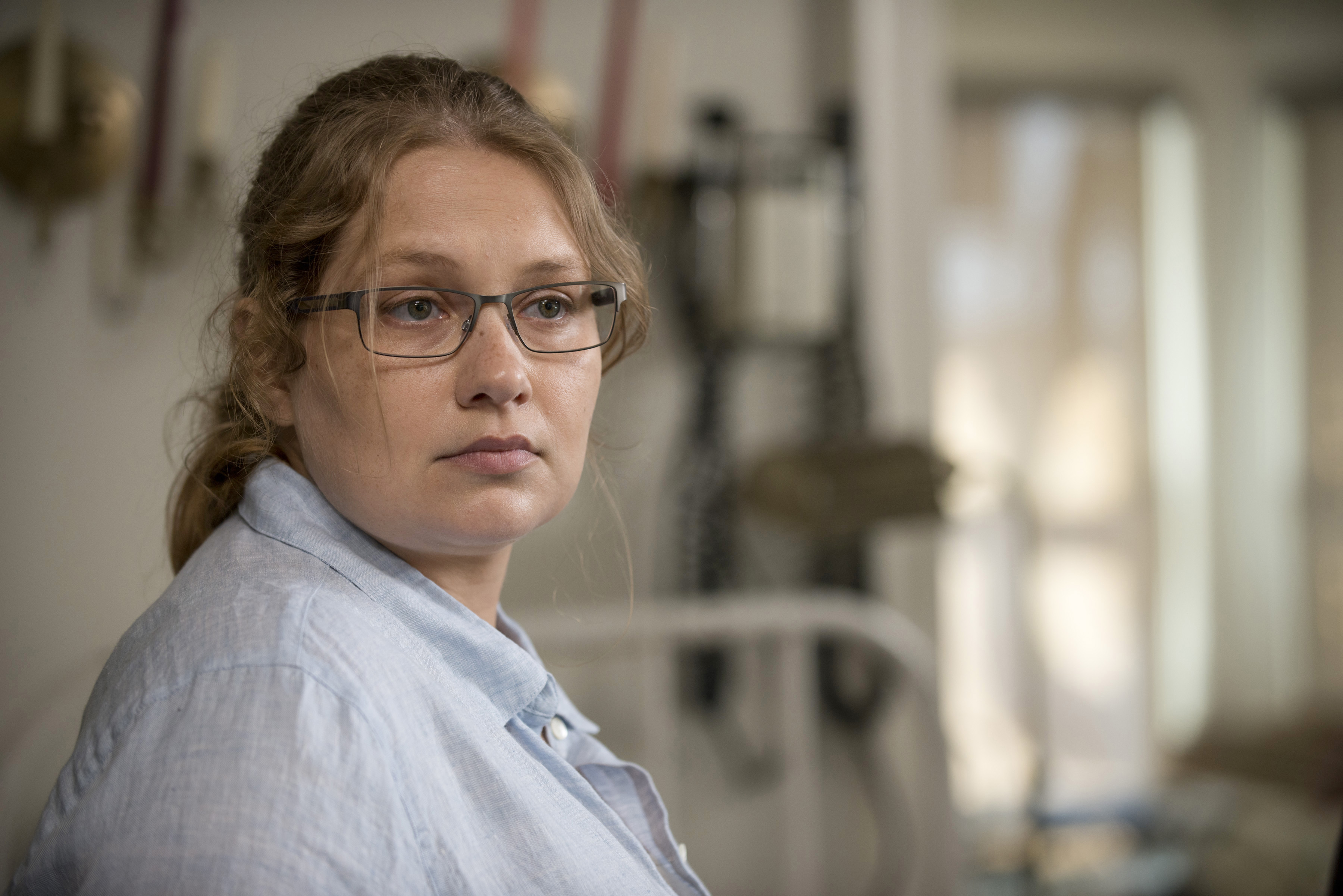 Remember when we said everything is wonderful? It’s not. This episode is about to go 0-100 REAL QUICK. While attending to kitchen stuff, Carol looks out her window and notices her neighbor Mrs. Neidermeyer ALL OF A SUDDEN GET STABBED BY ONE OF THE WOLVES. Holy CRAP! they’re everywhere (even Richard the lookout gets taken out by a Molotov cocktail)! Deanna is beside herself but summons enough courage to run away from the chaos. Carol instructs Carl to protect Judith while Jessie hides in a closet with Sam. Back outside, the Wolves are killing EVERY minor character in sight. This is a TERRIBLE time to not have Rick, Michonne, Daryl, and anyone else that could put an end to this invasion. 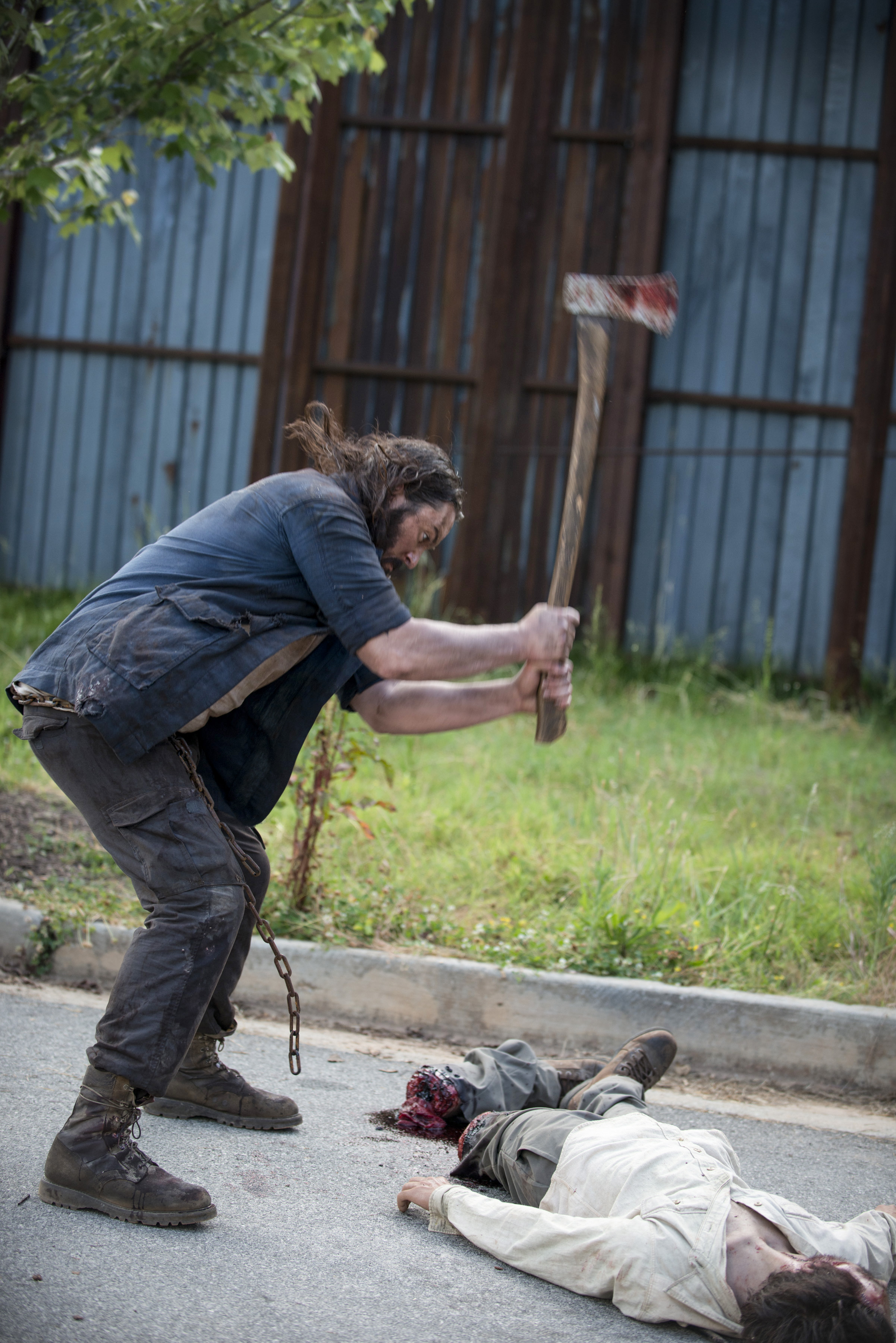 Enid tries to tell Carl she’s running away but he convinces her to stay and they sit back to back for protection. “This place is too big to protect,” Enid laments. Carol sneaks through the community and witnesses Alexandrian after Alexandrian get brutally murdered by the Wolves. Knowing everyone’s helpless and she’s the only one that can save them, Carol grabs one and stabs him in the head. Unfortunately, it’s too late for her friend, who Carol puts out of her misery. 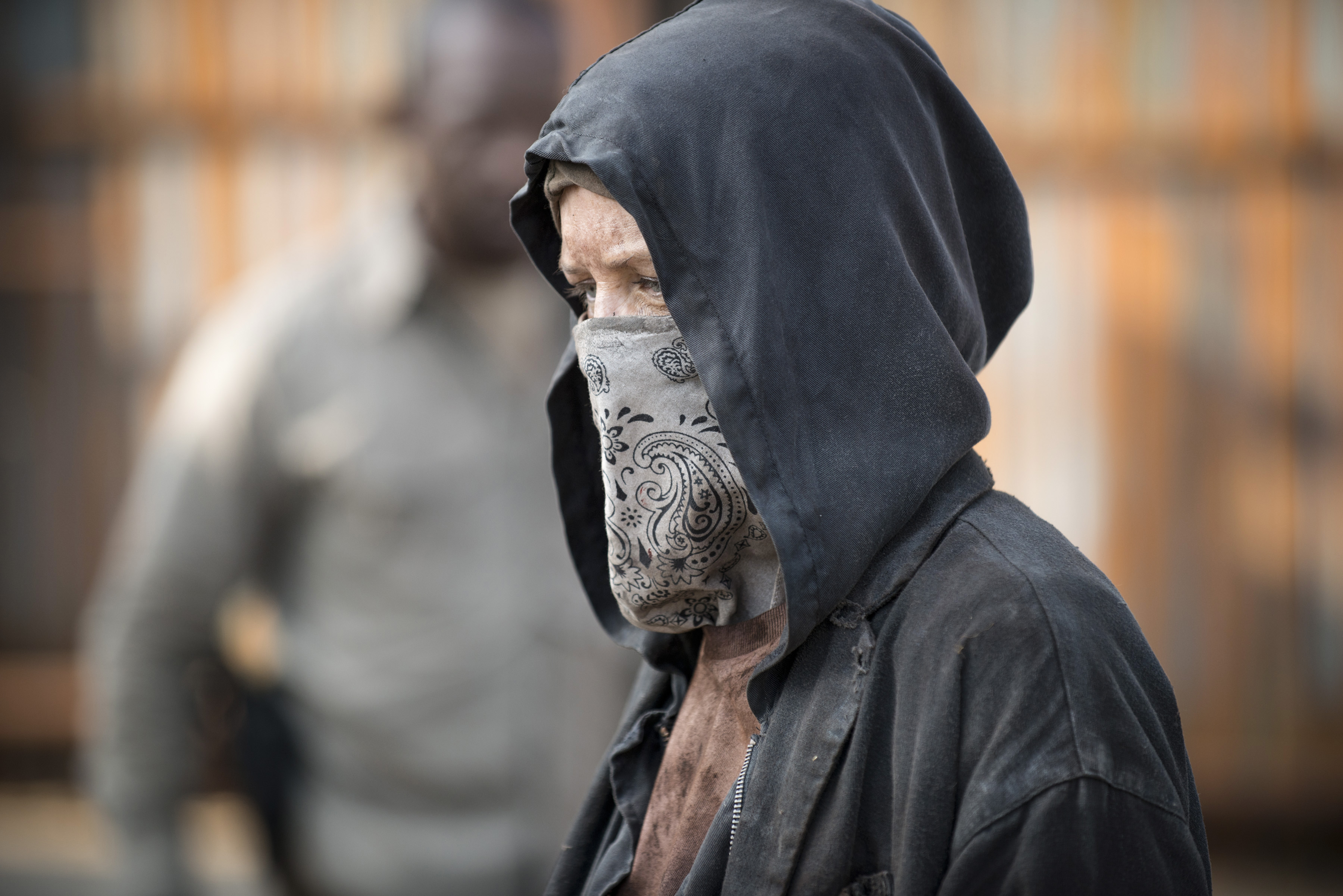 Spencer, who’s done a questionable job as lookout shoots and kills the driver (one of the Wolves of course) of an oncoming truck that crashes into the wall. Now we know WHAT was causing the horn! While Denise tends to injured Alexandrians, Morgan takes out the trucker-turned-walker and finally shuts off the horn. He instructs a pathetic Spencer to hide and soon comes face to face with one of the Wolves, who’s taken out by a disguised Carol. Morgan’s upset Carol killed him instead of knocking him out but she’s more focused on getting to the armory to worry about Morgan’s Batman morals. Back at the “hospital,” Dr. (not surgeon) Denise tries her hand at surgery. 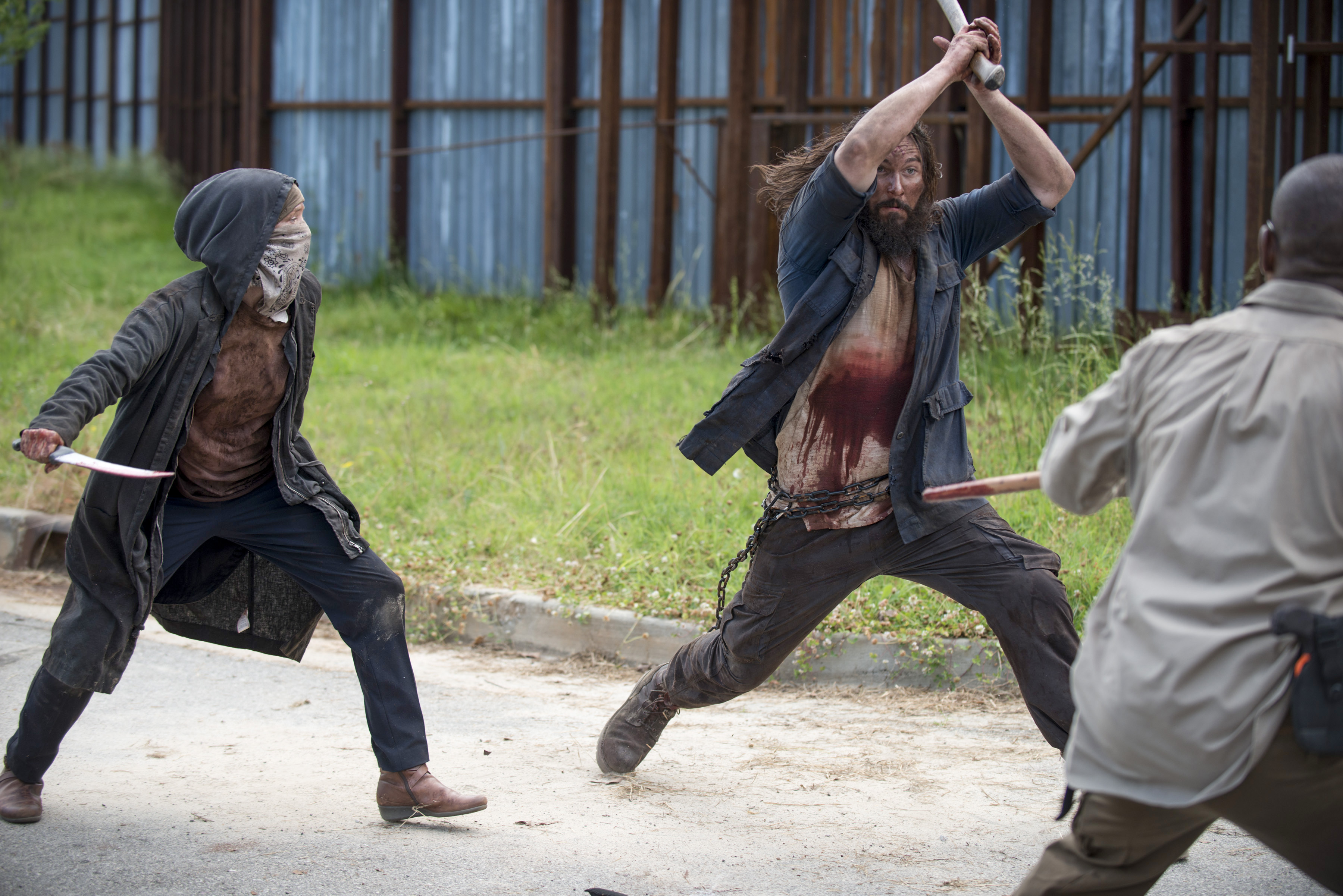 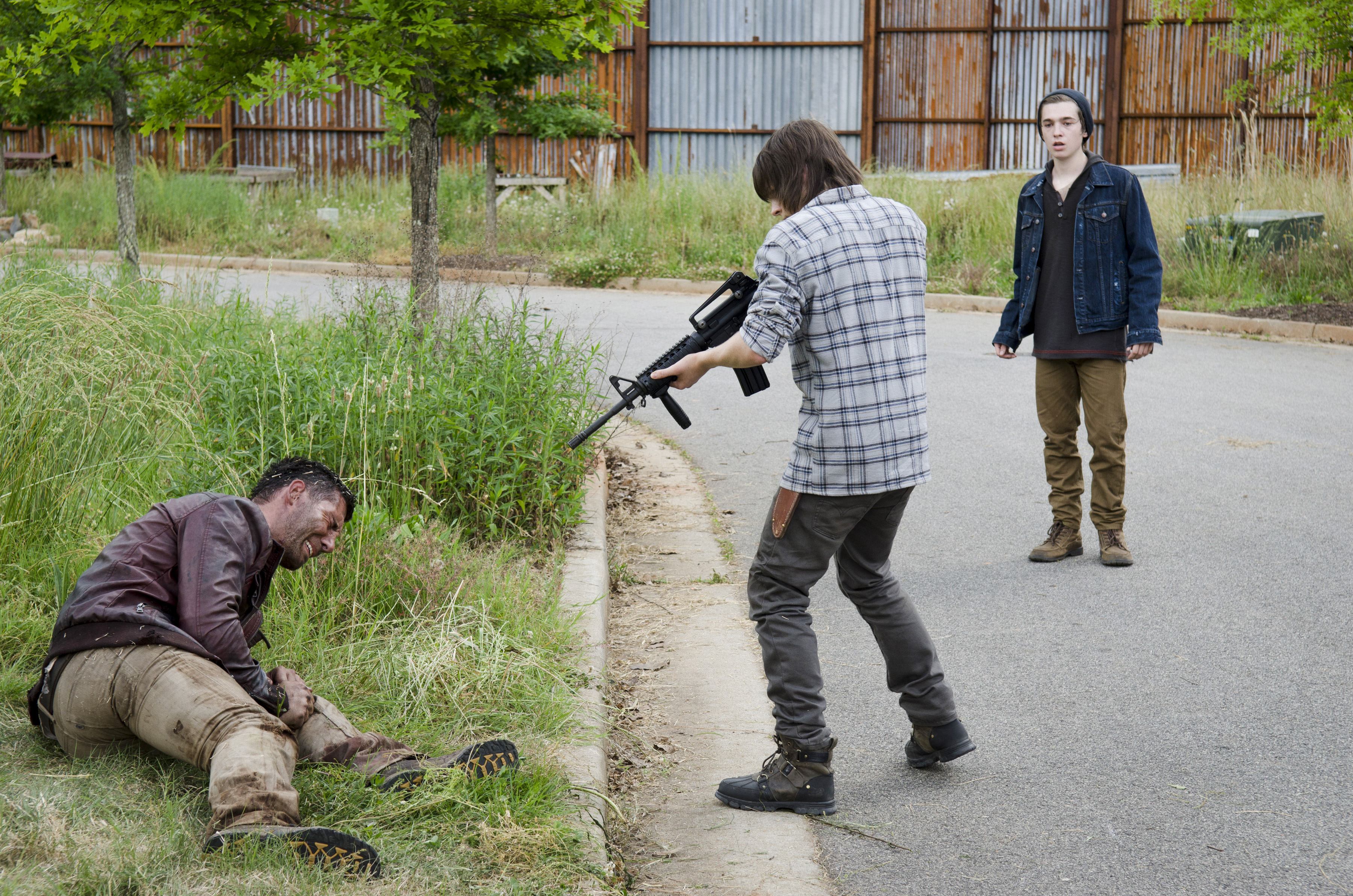 Jessie instructs Sam to stay hidden in the closet while she investigates the noise in her house. Turns out it’s one of the Wolves, but they picked the wrong mom to mess with. Jessie grabs a pair of scissors and stabs the living hell out of the intruder and goes full Travis Manawa from the Fear finale. 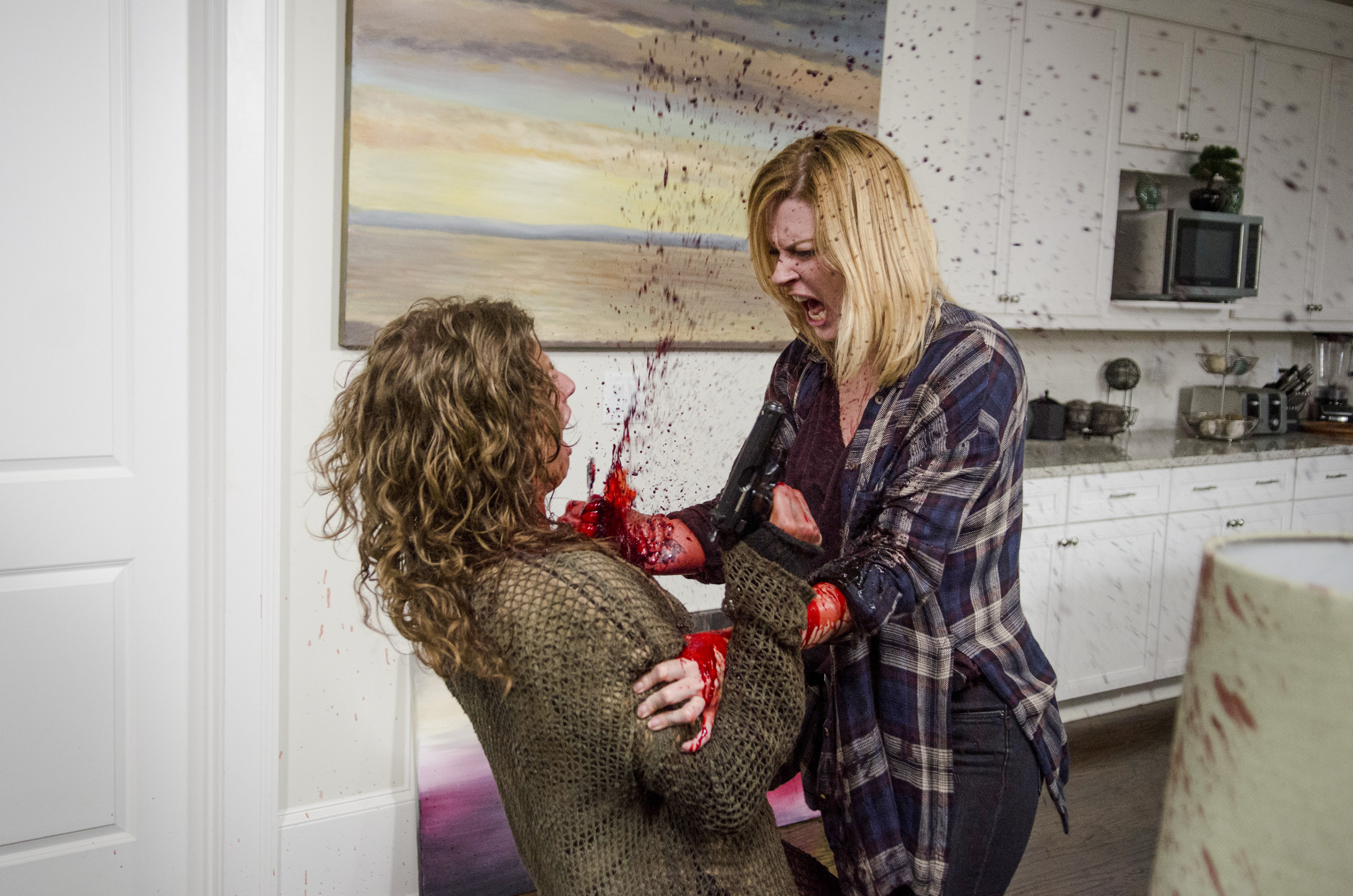 Outside, Carol picks off more Wolves while Morgan saves Father Gabriel. Some of the Wolves follow Carol to the armory (terrible, terrible idea) and they end up all getting shot up (her kill streak is insane, someone get her a care package). She stocks up and then shoots the guy Morgan just tied up. Morgan, who relies on nothing but Batman “I don’t kill” rules also refuses to take a gun. 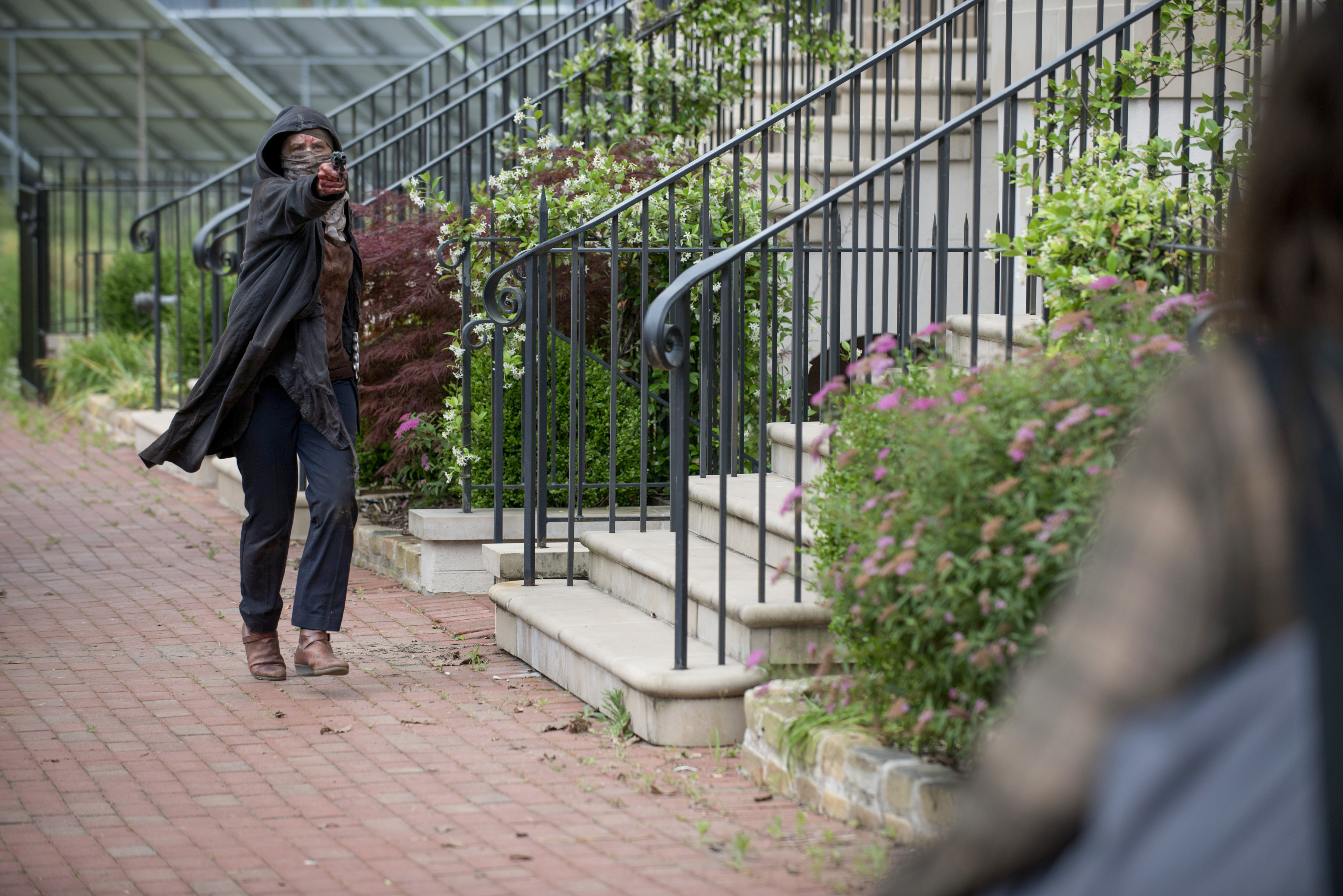 Rosita and Aaron take out a couple of the Wolves as the invasion comes to a bloody close. Before it can, Morgan comes upon a group of them by himself. He takes a few of them out with his stick and scares the others off with a lecture about making poor decisions. “We didn’t choose,” one of them tells Morgan (all the more reason to kill them, Morgan)! Carol is overcome with emotion after seeing half the town get slaughtered.

To make matters worse, Aaron makes a devastating discovery: One of the dead Wolves had his recruitment pack of Alexandria pictures he dropped a while ago. Essentially, it’s his fault that they found this place and he can clearly feel the blood on his hands. Meanwhile, Dr. Not a Surgeon Denise fails to revive Holly. Carl finds a note from Enid which says, “Just survive somehow” (THAT’S what JSS means)! It’s a fantastic slogan that in retrospect makes sense for her to perpetually write while she was out eating turtle and stabbing walkers. Morgan enters his house and is immediately attacked by Alpha Wolf we met last season. Morgan easily holds his own and knocks him out (not kill). Morgan and Carol end the episode by walking in opposite directions (literally and figuratively). Despite employing dramatically different methods, they both saved the town. 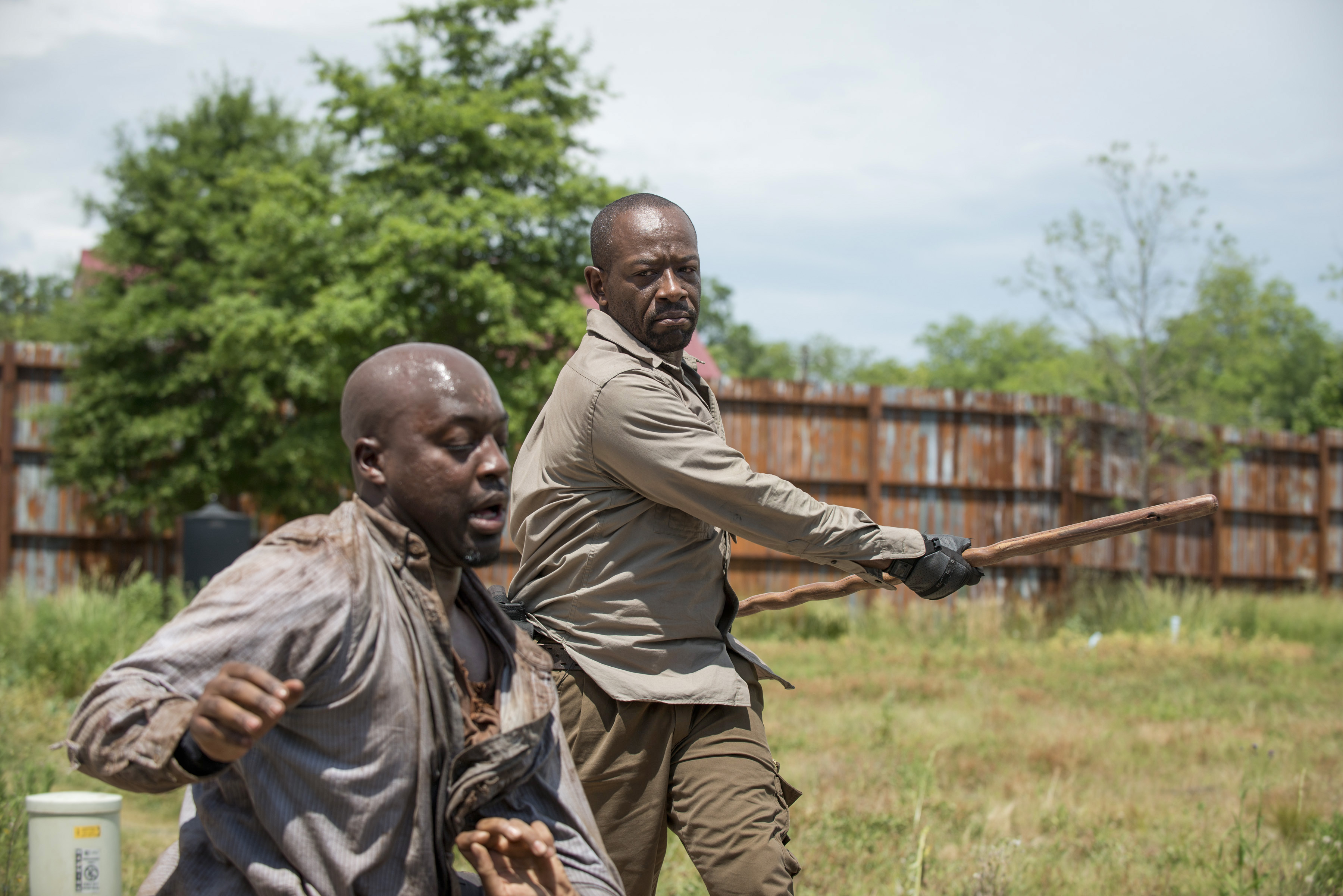 2. Did Morgan turn the truck horn off in time to ward off the hoard? Or is everyone even more screwed?

3. How would this invasion have gone if Rick and the gang were here?

The Walking Dead: An Inside Look With Robert Kirkman