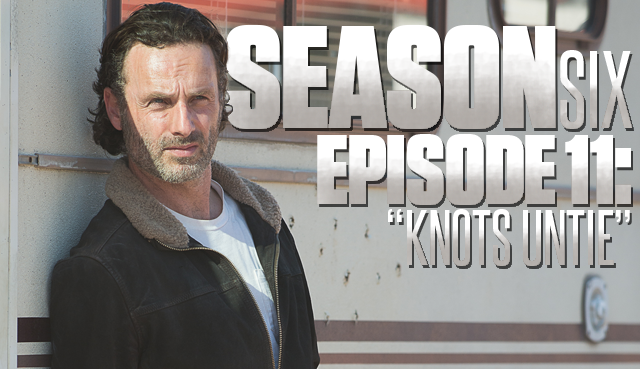 The Walking Dead world just got a WHOLE lot bigger…but let’s start at the beginning. The struggle is real with Abraham, who can’t seem to reconcile his love for Rosita and desire for Sasha. He and Sasha clearly share a connection but realize their limitations. Meanwhile, Carl pulls a gun on an unsuspecting Jesus and demands he explain himself.

The following morning, Jesus explains he comes from a community similar to Alexandria and he took their truck because his “community needs things.” He mentions there’s other settlements his community trades with and says, “Your world’s about to get a whole lot bigger.”

Rick tells Carl if Jesus is telling the truth it could “be the start to everything.” He apologizes about not telling Carl about Michonne but Carl’s cool with it. The gang leaves Alexandria in the RV to go to Jesus’ community. (Funny side moment: Abraham asks Glenn if he meant to conceive with Maggie by saying, “When you were pouring the Bisquick were you trying to make pancakes?” and Glenn says they were).

Rick stops the RV at a suspicious crash site and threatens Jesus saying, “If this is a trick, it won’t end well for you.” The gang explores an abandoned house next door to save Jesus’ friends. They hit the road again and we’re introduced to a doctor named Harlin, who was on a supply run for medicine. The RV gets stuck in mud but Jesus assures them “We’re here. That’s The Hilltop.” 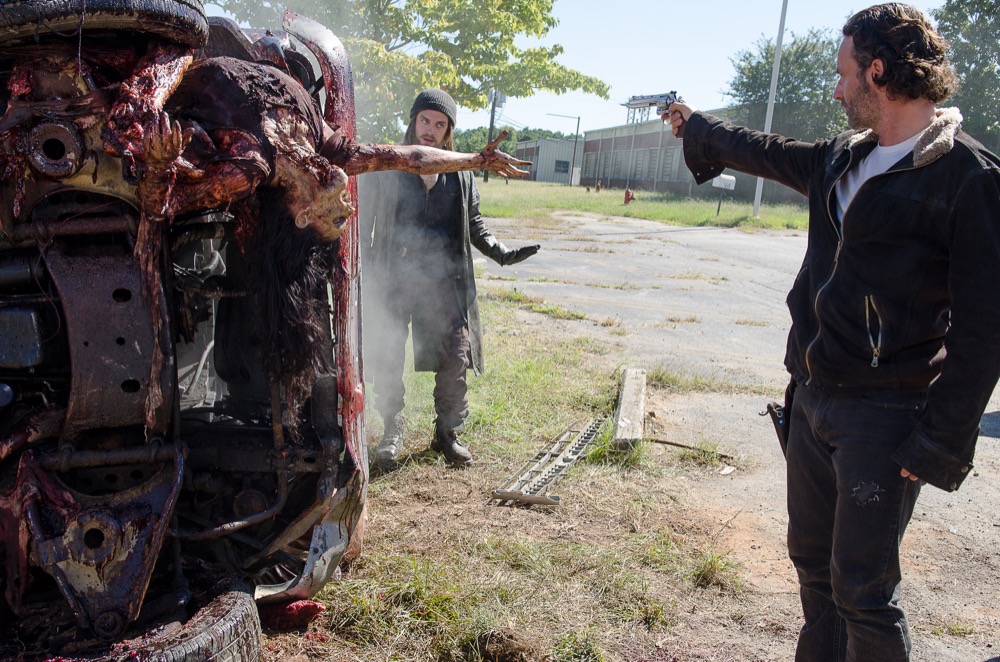 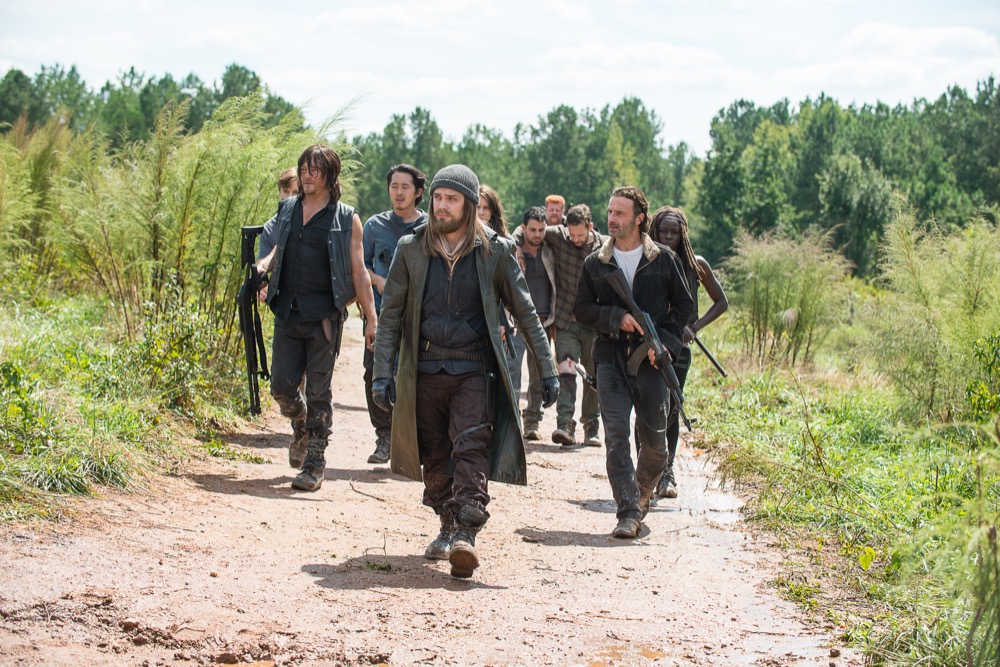 The gang approaches the wooden gates and is threatened by guards with spears. Jesus asks them to trust his people and the guards open the gates. Jesus explains the majority of the people and trailers came from FEMA camps. Jesus introduces them to Gregory, the leader of The Hilltop. On Rick’s suggestion, Maggie speaks with Gregory alone about how his community’s survived. Maggie suggests they start trading but Gregory dismisses it, says Alexandria has nothing to offer, and proposes her people work for it instead. 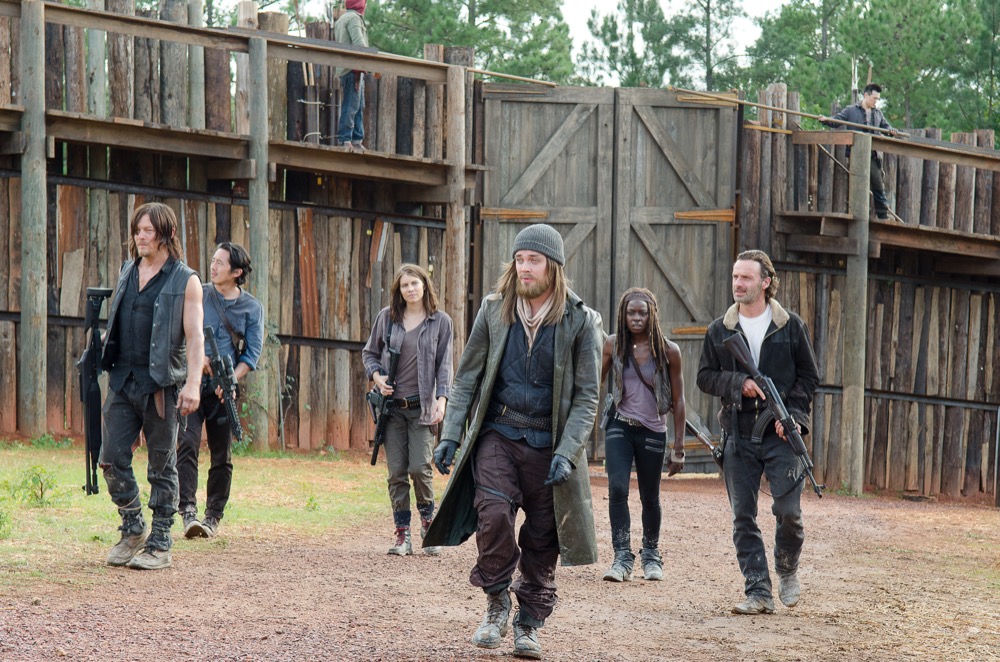 Jesus asks Rick and the gang to give him a few days to change Gregory’s mind about trading. They head outside to confront people coming back from a supply run gone wrong. Apparently, Negan said they didn’t have enough supplies and killed two of their own. Suddenly, Nathan says he has a message from Negan and stabs Gregory in the stomach. Rick tackles him while Abraham gets saved by Daryl who breaks the attacker’s arm. Michonne says, “drop it” and Rick takes the opportunity to stab Nathan in the throat…covering himself in Nathan’s blood. One of the women punches Rick for killing him and Michonne takes her the f**k down. Jesus breaks up the fight and calls Nathan a coward for doing this. 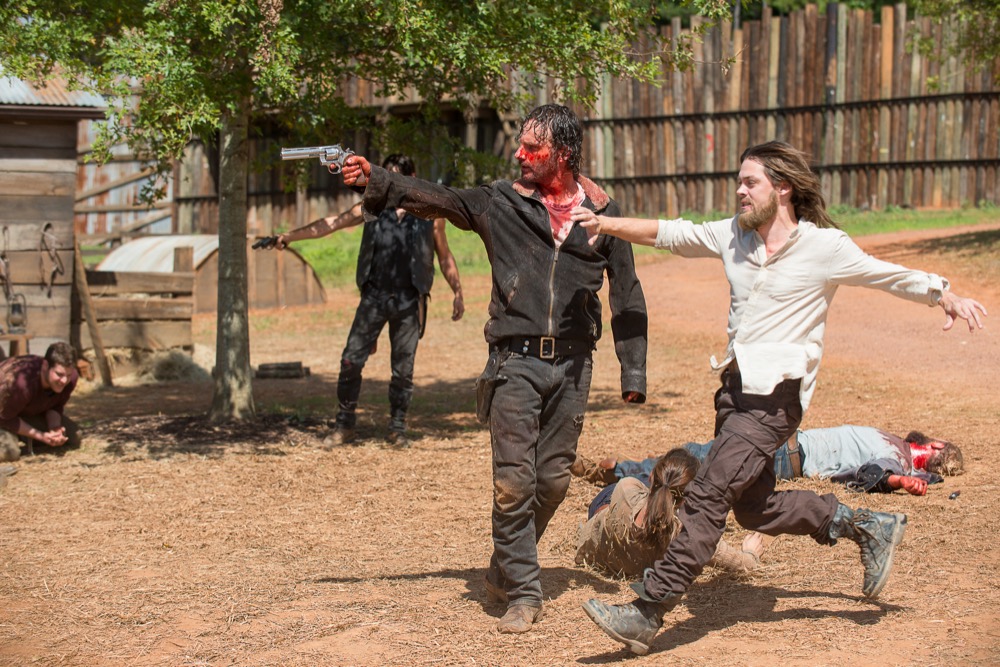 As Gregory heals up Jesus explains that Negan is the leader of a group called The Saviors. He reveals once The Hilltop was up and running Negan showed up, made a lot of demands, and beat the life out of one of their own. “Said we need to understand right off the BAT,” Jesus said. Abraham confesses he, Daryl, and Sasha blew some of The Saviors up a while back. Daryl proposes they kill Negan and rescue Craig in exchange for food and medicine. Maggie later convinces Gregory to accept this proposal.

Rick and his group gather supplies into their RV and promise to get Craig back from Negan. Rick questions him on Negan’s compound and convinces one of them to tag along. Maggie receives an ultrasound and sees her baby’s heartbeat for the first time.