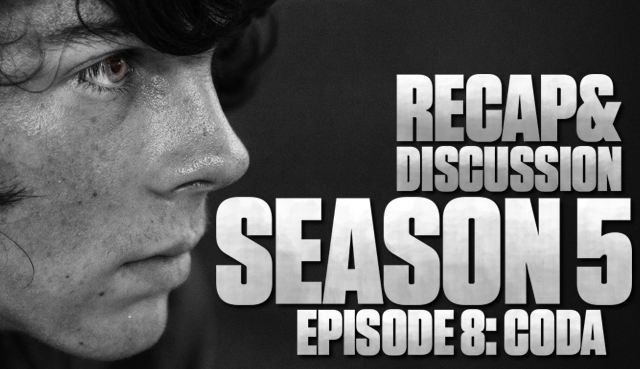 The Walking Dead mid-season finale is always kind of bittersweet. It’s always good for a big moment but you also know that once it’s over you’ve got to hunker down and hibernate for a few months until the show returns. But I think we have some good stuff tonight, so let’s grab the Kleenex and get to it!

We start out straight from where we were last week: Lampson fleeing after knocking Sasha out. He tries to rub through the zip tie binding his hands but takes off with walkers approaching. We see Rick running full speed after him. Rick jumps in one of their squad cars and drives after him. Rick orders him to stop over the PA but he keeps running and so Rick hits him with the car, as you do. It looks bad. Rick gets out and Lampson tells him that his back is broken. Lampson clearly is afraid of Rick and his group. “I asked you to stop,” Rick says. Lampson says they’ve been out there too long and starts to tell Rick that they’ll die when Rick puts a bullet in his head. “Shut up,” Rick says and gets back in the car.

Rick returns to Sasha, Daryl, Tyreese, and Noah. The other 2 cops are tied to chairs. They see that Rick is alone. Rick talks to Daryl and says that the exchange plan will no longer work, but Daryl points out that they know that Dawn didn’t like Lampson anyway. They go to see if the two remaining cops (Officer Back Up and Officer Lady Partner) will still go along with the plan. They don’t even have to ask before Officer Lady Partner tells a version of the story where Lampson was attacked by rotters and killed. So she’s game. She doesn’t want them to go in guns blazing. Rick asks Officer Back Up if he wants to live. He back’s up Officer Lady Partner’s story.

Sasha takes up the sniper position above the parking lot. Tyreese tells Sasha that he didn’t kill Martin the Termite when he had a chance. He says they’re still the same, like they were when they were kids. Sasha agrees but then says they can’t be the same. Not anymore.

Officers from Grady show up to meet Rick while Daryl and Sasha cover him. He tells them who he is and that he’s there to make a proposal. Rick puts his gun on the ground and then offers the exchange. They ask if Noah’s with him and he confirms. When one of the officers asks where Rick’s people are, Sasha snipes an approaching walker. “They’re close.” Rick says he’ll wait for them to radio Grady.

Father Gabriel has made his way to the school. I think he needs to see what happened for himself. He checks out the camp while the horde locked inside the school pounds at the door. Inside a backpack he find a bible that belonged to Mary (Gareth’s mom). He opens to Chronicles 8:10 to 11:21 (for those of you that want to check it out. Bible scholars, report in below). He lowers the bible to reveal the remains of a leg on the grill.

Gabriel bends down to look at it closer. It’s crawling with maggots. He tearfully yells and throws the grill just as the walkers break through the doors of the school. He limps back to the church, herd in tow. He begs to be let back in (as he was once begged). Carl and Michonne hear his cries and have to use an axe to get the door open. When they do, the herd comes with them. Carl shoots a few and Michonne cuts some down, but they’re overwhelmed.

They run to the rectory, where Gabriel made his escape hatch. He holds the door while Michonne and Carl leave. “I’m not going anywhere until you’re gone.” Once they’re out, he jumps into the hole and follows (but not before a walker falls and splits its head open on a machete that Michonne stabbed into the floor—pretty awesome).

“I can’t run anymore,” Gabriel says. Michonne: “We’re not running.” They take care of the walkers still in front of the church and then nail the doors shut.

Michonne asks Father Gabriel where he went and he tells her that he went to the school. “I had to know.” Just then the walkers start to break out of the church. “Where do we go?” Carl asks and Michonne looks concerned. But not for long because a certain fire truck comes barreling in, smashing the steps and blocking the door. And…

Maggie jumps out of the truck and hugs Michonne. Glenn tells them how Eugene lied and Michonne gives kind of a “are you f’king kidding me” look but there’s not a lot of time spent dwelling on it. Michonne gives Maggie the news that Beth is alive. Maggie is like, “Who’s Beth?” J/k. She’s very, very, happy to hear that her sister is alive. Tara says, “Let’s blow this joint, go save your sister.”

Dawn works out and tries radioing her officers while Beth looks at.. mail? Something. She organizes Dawn’s stuff. She looks at a photo and asks about Captain Hanson. Dawn says that Beth will hear stories about what happened. Hanson was her friend and mentor but he lost sight of the fact that every time you send people outside you’re risking their lives. She says if you lose the respect of your men, one day you’ll need back up and you won’t have it. This rationale is at the heart of every decision Dawn makes.

Beth walks in on one of the officers yelling at the old man from last week (Percy, the strawberry addict) about messing up a hole Percy was supposed to stitch up in his uniform. He shoves the old man down as Dawn comes and gets Beth.

Later, Beth sits near the elevator shaft and stares down it. Dawn walks up and tells her that Percy will be ok. “Nothing’s ok,” says Beth. Beth is clearly unsatisfied with the idea of spending her entire life in the Hospital, in that system. Dawn reveals that she knows what happened in her office when Beth killed Gorman, and that she protected her.

The officer that was yelling at Percy (Officer O’Donnell) closes the door to the hall and has clearly heard more than he should. He threatens to tell everyone what Dawn did. When he moves to leave, Dawn pulls her gun. She forces O’Donnell to move toward the elevator shaft as he tries to reason with her. Dawn is starting to take a stand against the officers abusing their power. O’Donnell makes a move against Dawn and they have a fist fight. Beth gets hit, Dawn kicks O’Donnell near the open shaft, and Beth finishes him off by shoving him down it.

Beth goes to Carol’s room and falls asleep sitting against a wall. Dawn comes in and offers her a drink. Beth tells her that she knows that she covered for her to save her own ass, not to protect Beth. “That’s how things get done here. Everyone uses people to get what they want. And you’re not the ones that have to remember.” Dawn insists that she’s not using Beth and also says that Noah will be back, because everyone comes back.

It’s just after this that Rick’s group makes contact, and their story lines merge.

Rick’s group enters the hospital with their two hostages while Beth gets ready to leave (and hides a pair of scissors in her cast). Her and Dr. Edwards wheel Carol toward the exchange point. It’s Dawn and her officers on one side, and Rick’s group on the other. They all holster their weapons. The two officers give their version of the Lampson story, which Dawn accepts but probably doesn’t buy. They trade the officers for Carol and Beth but as they start to leave, Dawn asks for Noah. Rick objects. Daryl objects. Dawn is adamant. Noah says it’s ok. Rick says no but Noah insists. When Noah starts to walk back Beth runs and hugs him. “I knew you’d be back,” Dawn says. This pisses Beth off. She walks up to Dawn. “I get it now,” she says, and then stabs Dawn with the scissors. Dawn reacts instinctively and shoots Beth in the head. She looks shocked at what she’s done and we see her mouth “I didn’t mean…” but she doesn’t have long to think about it because Daryl pulls his gun and shoots Dawn clean in the head.

Officer Lady Partner calls everyone off as they all pull their guns. It’s over. “It was just about her.” Rick’s group looks devastated. Especially Daryl. The Grady Bunch offers to let them stay. Obviously it’s a big “no,” and Rick offers to let any of the Grady Bunch leave with them. None of them step forward.

Outside, the fire truck arrives…

Everyone gets out of the truck, armed and ready for action, but it’s mostly piles of downed walkers. As they approach the doors Rick and everyone comes out. One of the last out the door is Daryl, carrying Beth’s body. Maggie sees this, screams, and collapses. There’s a high shot of the entire group standing around Daryl, shocked. And END.

ANOTHER end credits scene! And again it’s Morgan. He’s still following the Termites’ carvings. He examines the camp at the school. He crouches over a collapsed walker. “Shhhhh,” and then stabs it in the head. He continues to follow the symbols in the trees to the church. He creates a little shrine with a cross, a candy bar, a bullet, and a rabbit’s foot. He kneels and laughs as he looks around. When he checks the church he finds the map that Abe left Rick. As he reads the note a look of surprise comes over his face as he sees it’s for Rick Grimes aaaand ACTUAL END.

AWWWWW MAN! I don’t care how you felt about Beth, it’s so sad to see Daryl carrying her out of Grady. F those guys, man.

Where does the group go from here?

I’m kind of surprised Dr Edwards didn’t go with them. Dude was shady but a doctor is a good pick-up in the apocalypse.

Will Morgan be able to find Rick? And what’s his mental state? He’s obviously gotten it together somewhat, but the way he dealt with the walker and the little shrine he built… is he just BARELY hanging on?

Sneak Peek of Season 5B