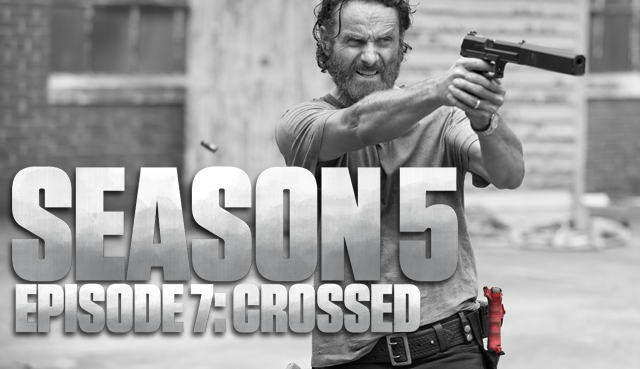 It is time for Season 5, Episode 7 of The Walking Dead, “CROSSED.” This episode goes back and forth between 4 and 5 different groups, so we’re going to break this recap down into sections to make it a little more readable. Let’s get to it!

We are back at the church, and the group is ripping it apart to build up its defenses. Daryl is back, along with Noah. Rick tells Michonne that he can’t let Carl go to Atlanta, but Carl needs to stay behind. When Michonne tells him he could stay he says that he owed Carol, more than most. Michonne ends up staying behind with Carl, Judith, and Gabriel (who was doing some thinking about what he’s done). Gabriel looks at the blood stains on the floor and tries to scratch them off. Then spits on this sleeve and rubs obsessively.

Sasha and Tyreese sit in the back of the box truck and Tyreese tries to connect with Sasha. She doesn’t want to hear it though. The wounds are too fresh.

Once in Atlanta, Rick lays out his plan. Fire a shot in the air, draw a couple of them out. Kill them. Break in the building. Kill the guards. Keep it quiet. Fan out and kill everyone. He’s very cavalier about the murdering. Tyreese worries about what happens if things go wrong and offers an alternate plan: capture two cops and trade them. When Rick says that Tyreese’s plan is okay, but insists that his own plan will work for sure, Daryl sides with Tyreese. He wants everyone to live through it.

The next time we see the group it’s time to put the plan in action. Noah fires a shot and lures a patrol around a corner. When they get out of the car and zip-tie Noah, Rick and the gang surround them, disarm them, have them kneel, and cuff them. The male cop (Lampson) recognizes that Rick talks like a cop and says he was a cop before the apocalypse as well. Just as Noah is telling Rick that Lampson is one of the good ones, back up arrives. He lays down cover fire while Lampson and his partner get in his car. As they try to get away Sasha smoothly shoots out their back tire.

The group chases them around a corner where the car is now deserted. There are a bunch of burnt, melty walkers on the ground. Rick sees Lampson and his partner (still zip-tied) running behind a building and they take off after them, leaving Daryl behind, who heard someone else.

Daryl gets jumped by the officer on back up and a fight ensues, ending up on the ground by the melted walkers. On his back, Daryl grabs the head of one of the walkers, sticks his fingers in its eye sockets, rips its head clean off, and beats the officer with it. Pretty awesome, pretty gross. Rick shows up and ends it. He looks like he’s about to kill the officer but Daryl talks him out of it: three hostages are better than two.

As they take Officer Backup (I’m just going to make up names so get used to it) into custody, Officer Lady Partner tells them that they can help them if they tell them what they want to do. Officer Lady Partner proceeds to tell them that Dawn won’t trade for them since she doesn’t like them, so they should just let them go and they’ll take care of Dawn for her.

Lampson speaks up. No, he says. He says they can make the exchange work and asks them to please let him help.

Sasha and Tyreese pillage Officer Backup’s car when Sasha rips Bob’s shirt that she wears. This causes a minor breakdown. Tyreese big brothers her and tells her to let him help her grieve. Then they hug and I get emotional.

As the group gets ready to leave, Lampson is coaching Rick on what Dawn will say. Rick asks if there’s anything he needs before they go. Professional respect? Is Lampson playing Rick?

With the group gone, Sasha talks to Lampson. He confesses to Sasha that he knew one of the walkers out in the parking lot, that it was an officer that died when he went on a call that Lampson should have gone on. Sasha offers to mercy kill him if Lampson can show her where he is.

They go to the window, and Lampson describes his buddy. When Sasha is about to take, he body checks her against the window, knocking her out and bolts for the door.

Eugene is still out cold in the road. Tara labels the water bottles and then refers to the group as a band of brothers (hey-o! Michael Cudlitz was awesome in Band of Brothers). Rosita goes to snap Abraham out of his funk (he’s still kneeling on the concrete). He smacks the water bottle out of her hands and then jumps to his feet and gets in her face when she starts yelling. Maggie pulls her gun on him with complete conviction. He recognizes it and sits back down.

Out of water, they decide to head to a stream, leaving Maggie with Abraham and Eugene. Maggie uses a ladder and a blanket to build a lean-to for Eugene, giving him some shade. Then she goes and tells Abraham to get over himself.

At the stream, Glenn fills a water bottle and despairs at how muddy it is. Rosita MacGyvers a water filter to get the dirt out and says that Eugene taught her how to do it. She then relates how she came to be with Abraham and Eugene. As she finishes her story, they see ripples in the water. There be fish under the surface!

They go back to a couple of walkers they saw trapped under a utility pole and scavenge them. They rip their jackets apart for nets and Tara frees a muddy backpack. Rosita and Glenn manage to catch a fish. Rosita says she can clean the fish and Glenn tells her that they can use that skill, wherever they end up. Glenn: “You in?” Rosita: “I’m in!” As if this weren’t happy enough, Tara finds a yo-yo.

At the truck, Maggie goes to give water to Abraham. “Did you want me to shoot you?” she asks. “I thought I did. But I didn’t.” Maggie leaves the water by Abraham as Eugene wakes up. As she tends to Eugene, we see Abraham pick up the water bottle.

At the hospital, Dawn is dealing with her officer’s inability to find Noah. Beth listens in. When the conversation turns to Carol, and the officer wants to let Carol die, Beth interrupts on Carol’s behalf. Her outburst forces Dawn to tell the officer to pull the plug on Carol. When the officer leaves, Dawn gives Beth a key to the drug locker and tells her to save Carol.

Beth goes to Dr. Edwards and asks him what medicine would save Carol. He tells her. He also warns that if she gave Beth the key it’s for selfish reasons.

Beth enacts her plan to get the drugs to save Carol. She trades strawberries to an older man who in turn feigns breathing problems to draw all the guards. Beth gets into the drug locker, takes what she needs and walks back by the older man and the guards, and the older man immediately feels better and somehow no one is suspicious or notices Beth walk within inches of them.

Beth administers the epinephrine and waits for Carol to wake up, holding her hand. “I just wanted you to know I was here,” she tells an unconscious Carol.

As they finish their defense-building duties, Carl wants Gabriel to learn how to use a weapon. You can’t stay in one place anymore, Carl says. Gabriel picks up a machete but looks like he’s about to hurl when Carl starts instructing him in the finer points of head stabbing. He goes to lie down.

Michonne checks on Gabriel, who says he was resting but he doesn’t open the door very wide. Michonne reassures him that the things they do are worth it. When he closes the door we see that he’s been using his machete to pry up floor boards (how did they not hear this?).

Gabriel hops down into the crawl space and squeezes out of the church. He immediately steps on a nail because he somehow manages to have the worst luck in the world. He pulls it out, wonders when his last tetanus shot was (I assume), and hobbles off.

Gabriel gets jumped by a walker (or as close you can get to being jumped by a walking corpse). He picks her up and slams her to the ground. Before he can bash her head in with a giant rock, he sees the cross around her neck and can’t go through with it. He leaves her there and heads off through the woods.

What’s Lampson’s game? Was it just him playing Rick or are all three of them trying to screw over Rick’s group?

Is Abraham going to come around and man up? Where are they going to go now? Will Tara learn the deadly art of yo-yo fighting?

What game is Dawn playing with Beth? Can Beth trust Dr. Edwards?

Where is Gabriel off to?

NEXT WEEK IS THE MID-SEASON FINALE!!!

We want to hear from you!!! Post a thought down below!!! Let us know what you thought of the episode!!!