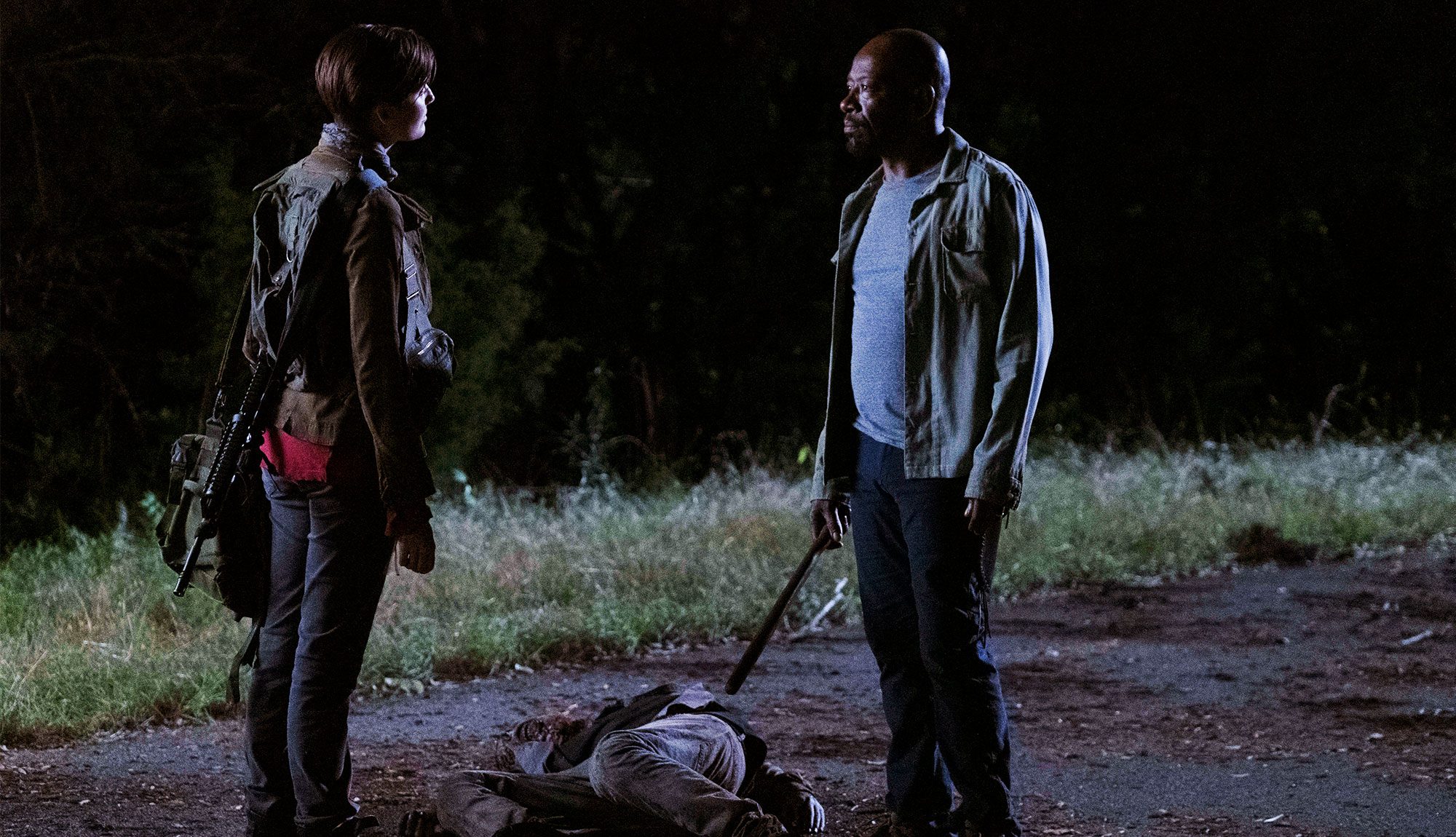 Morgan watches tapes of himself discussing his past and tells Al they should drop off more boxes before returning to the convoy. She reluctantly agrees and notices one of her gas cans missing. They quickly find a rugged man filling up a car; he takes out a knife and begs them to leave. Suddenly, four horsemen arrive and the three of them are forced to hide in the van. The horsemen nearly discover them but luckily get distracted and leave. Al promises the man they can help him, but he says, “That’s what they said.”

Elsewhere, Grace receives word from the convoy about losing the oil fields, so she updates Daniel. On the road, the stranger, Tom, explains the horsemen offered to help him and his people out but later tried to kill him when they decided they didn’t need him anymore. He explains his sister Janice is still stuck in the Paradise Ridge apartments and they have to find her. Al recognizes the horsemen’s “It’s not about today, it’s about tomorrow” motto from Isabelle and promises to help him out.


The three of them hang outside the apartments and monitor the horsemen’s coming and goings. Morgan asks Al if she really wants to save Janice or if she just wants the story. She tells him it’s not just about the story and suggests she needs something else in there. Later that night, Morgan catches up with Al and warns her again not to go in alone. He prods her more about what’s really going on and she dishes it back. Elsewhere, Daniel and Grace’s transmission gives out because their truck is too heavy with supplies. Grace suggests they hole up in a place nearby in the meantime.

Meanwhile, Morgan and Grace sneak into the apartments while a guard is distracted by a walker. They hide in a stable as an oil tank truck arrives. When their friends don’t come out Morgan assumes the worst, but Al tells him to wait. She reveals she might know someone (Isabelle) from the group since she seemed to recognize their “not today” motto.

On the road, Daniel tells Grace that for a while, Skidmark was all he had. Suddenly, walkers show up and overwhelm them, ruining his vinyl collection. Back at Paradise Ridge, Morgan breaks into a house to search for Janice while Al searches for her own person. She finds their inventory board and location map while Morgan throws a walker off a balcony. That walker quickly finds Al and tackles her into a swimming pool. Morgan jumps in after her and stabs the walker in the head. They swim to the surface as the generator lights pop on and Ginny and her men compliment them on making a hell of an entrance.


The next morning, Ginny and her people visit Morgan and Al in an apartment. She introduces herself and explains she watched their tapes. Morgan asks about Janice and Ginny explains she took off shortly after Tom. She also assures them their friends are fine (except for Logan). Ginny tells Morgan he should speak to someone on her team about losing his family. Al cuts in and asks if one of her settlements has helicopters and Ginny asks where she got that crazy idea.
Afterwards, Ginny escorts them to the gate and hands Morgan a hand-crafted staff as a gift. She reminds them they can always join her group but they ignore her and walk away. Elsewhere, Daniel tells Grace he got those records for Charlie, who helped him get out of his funk. He asks her to look after Charlie if anything ever happens to him, and she agrees. Grace then reveals she wishes she could help Morgan more but Daniel assures her she already has. She then spots a guitar and suggests they teach Charlie with it. Together they sing the chorus of “End of the Line” by the Traveling Wilbury’s.

On the road, Tom apologizes to Morgan and Al for getting them into trouble for nothing, but they assure him they’ll keep looking for his friend. Later, Al tells Morgan she cares about Isabelle and was hoping she would be connected to Virginia’s group. Morgan then tells her he doesn’t think he needs to do tapes on his past anymore, signaling he might be finally moving on. He then radios Grace and says they need to talk. Daniel picks up and says she has become terribly ill. She tells Morgan she hopes to see him again but doesn’t think there’s much time left. Daniel gives him their location and then tells Grace she’ll be OK.

What did you guys think of the episode? Let us know in the comments!

The Skybound Rundown: The Walking Dead Season 9B

The Best Images From Fear the Walking Dead Episode 514