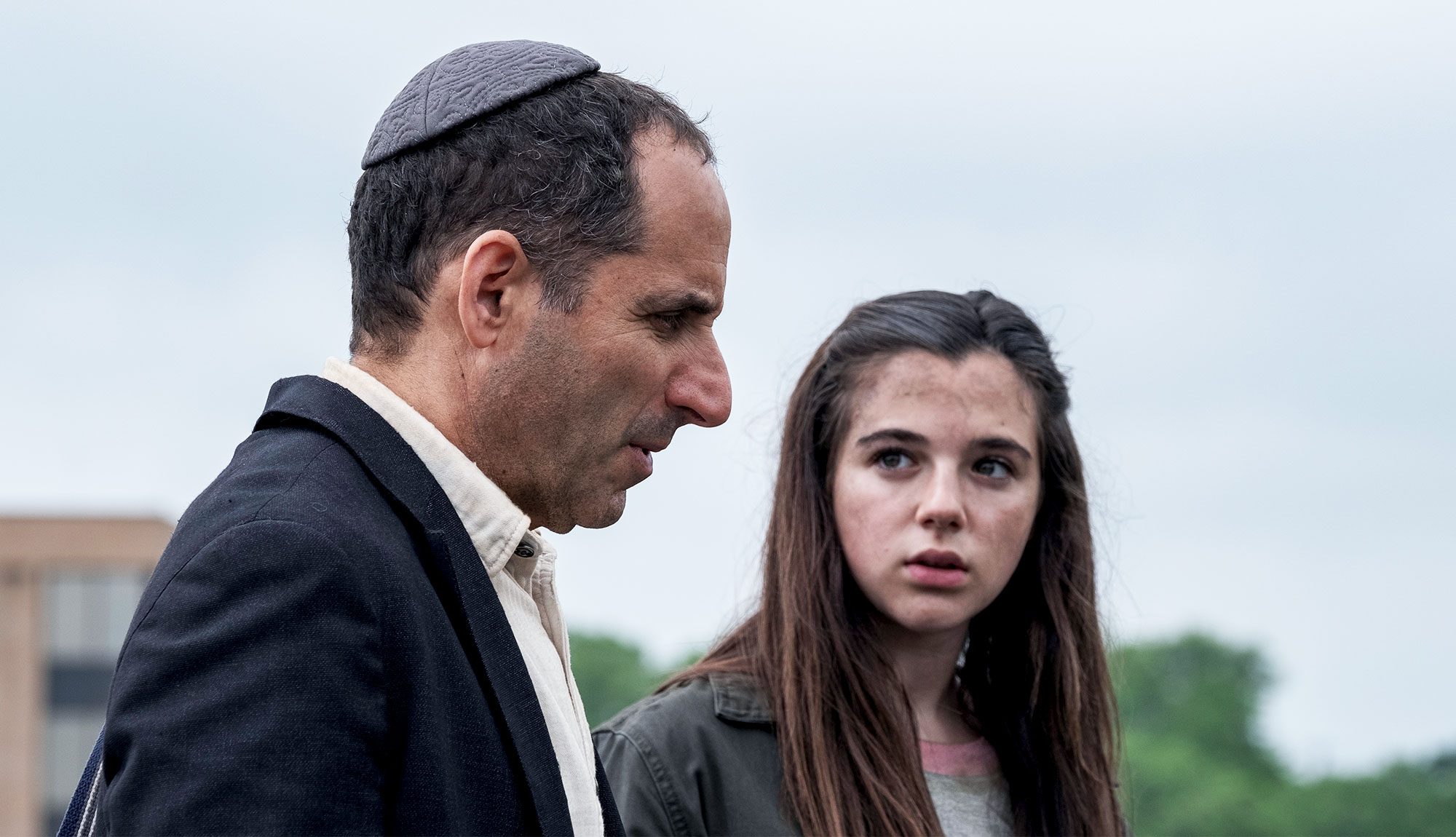 A rabbi gets interrupted from a solo service by a walker banging on his door outside. Annoyed, he uses the knife on his rifle to kill it, along with two more walkers nearby. He nearly gets bitten by a third until a girl opens the car door and knocks it to the ground, allowing him to kill it. Charlie emerges and the two introduce themselves; the man goes by Rabbi Jacob Kessner. He tells her God must have led her here. \

Elsewhere, the convoy sets up camp in a field. Sarah admits they’re running low on gas so June suggests they go on a supply mission to find more. John suggests she slow her roll when Dwight informs them Charlie’s missing. Cut to Charlie! She wakes up in the temple and helps Jacob kill walkers by the fence outside. She reveals she got separated from her group and he vows to help her reunite with them.

Back in the temple, Jacob tells Charlie despite the fact he lost his congregation, “tradition is very important, more now than ever.” He then notices the bulb in his chandelier dimming and begins to panic, telling Charlie he has to leave to find batteries. Charlie says she knows where he can find some. She radios June to tell her she ran away because she was tired of the constant moving. She reveals where she is and asks her to bring car batteries. While they wait, Jacob attends to a building full of walkers, where he says a prayer.

John and June arrive with the battery and Jacob thanks them for keeping the eternal flame lit. Charlie asks them to help Jacob repair his fence and they agree. John offers Jacob a caramel candy and Jacob gifts him a yarmulke. Outside June tells Charlie the temple isn’t the right place to settle down because it’s too small and too far from a water source. Elsewhere, Sarah and Dwight share a beer and discuss how they used to survive before the caravan. Suddenly, Dwight spots Logan’s people on the road.

Back at the temple, Charlie suggests her people could live there with Jacob, but he politely turns her down. Like parents, June and John tell her it’s time to go. Sarah radios them about Logan’s people and June says they’re on their way. They head outside to find all the walkers from the locked-up building waiting for them. Jacob reveals they were his congregation.


Jacob takes them to the roof and explains he and his congregants were holed up in the temple when at the onset of the apocalypse. After gathering supplies nearby, he returned to find them all turned. They understand, and soon after John and June climb down and use a ladder to create a bridge in between cars to avoid the walkers. Meanwhile, the man Dwight let go intercepts their radio signal and warns of trouble. Sarah walkies June to tell her to hurry. As they make their final ladder bridge the gate gives way and two become trapped on the car with walkers at their heels.
June tells Charlie there’s only one way out of this but Charlie refuses to give the place up. She reminds Jacob that he told her God led her there but he reveals he actually doesn’t believe in God. “I haven’t in a long time.” He explains he began losing faith when the world turned but had to pretend to keep his people alive. “I’m alive because I didn’t believe in God,” Jacob says, before saying he kept tradition because it’s all he had left. Charlie finally relents and Jacob uses a horn to lure the walkers into the temple. Once they’re all inside, John and June lock the doors. The walkers extinguish the light as Jacob and Charlie escape out the back.

Dwight and Sarah’s truck runs out of gas as Logan’s people finally catch up. Before they can battle, Logan’s people decide to leave. Sarah notices John and June pull up behind them in Al’s SWAT truck. A little later, June apologizes to John and Charlie for moving them around so much but says the perfect place is still out there. Jacob says that’s called faith, and that he’ll start looking around for what he wants, too. While fueling up, Sarah and Dwight introduce themselves to Jacob. Sarah reveals she’s also Jewish. Elsewhere, the man Dwight let free radios Logan that John and the gang are as far away as possible. Logan then arrives at a gated tunnel and says they’ve arrived at “the promise land.”

What did you think of this week’s new episode of Fear? Do you think Jacob would get along with Father Gabriel? Leave all your thoughts in our comments!