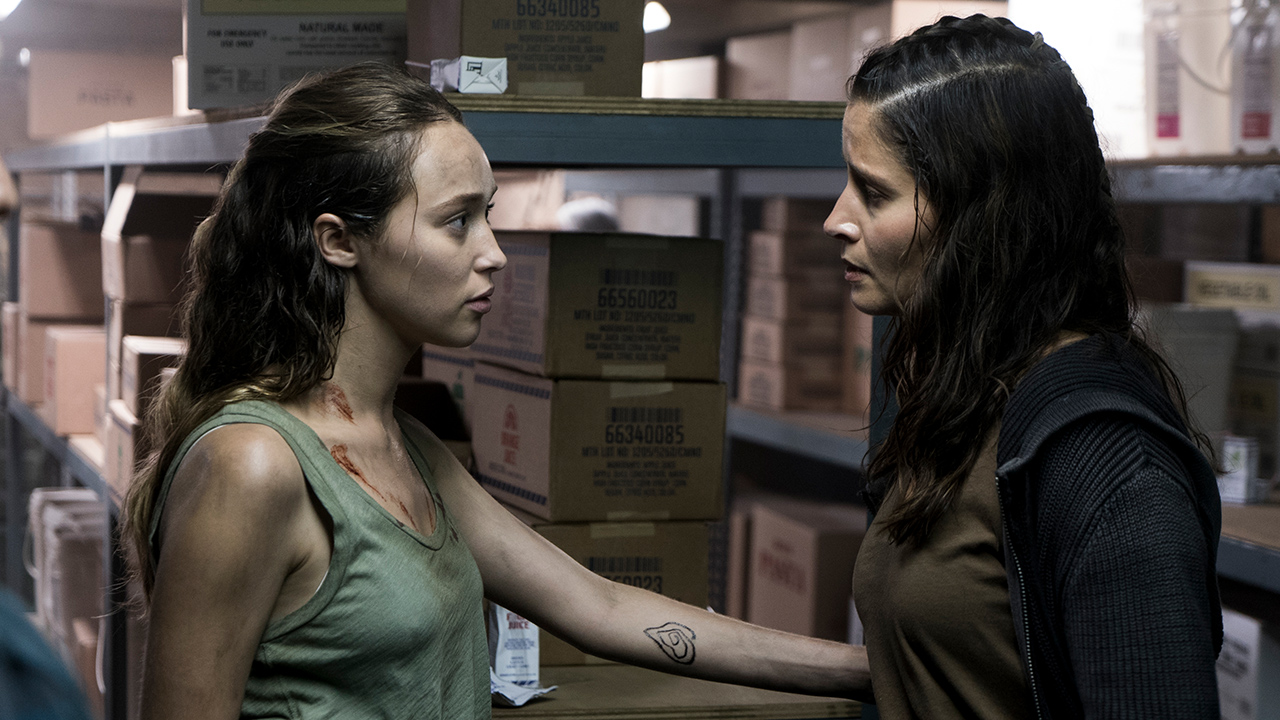 “This Land Is Your Land”

Trapped in the pantry following Troy’s coordinated walker invasion, Alicia quickly realizes she’ll have to make some tough choices. This is made especially more difficult when she and Ofelia calculate they have two hours of clean oxygen left. Alicia breaks the news to the ranchers and asks those who have been bitten to come forward. A younger rancher outs himself and inspires others do so as well. 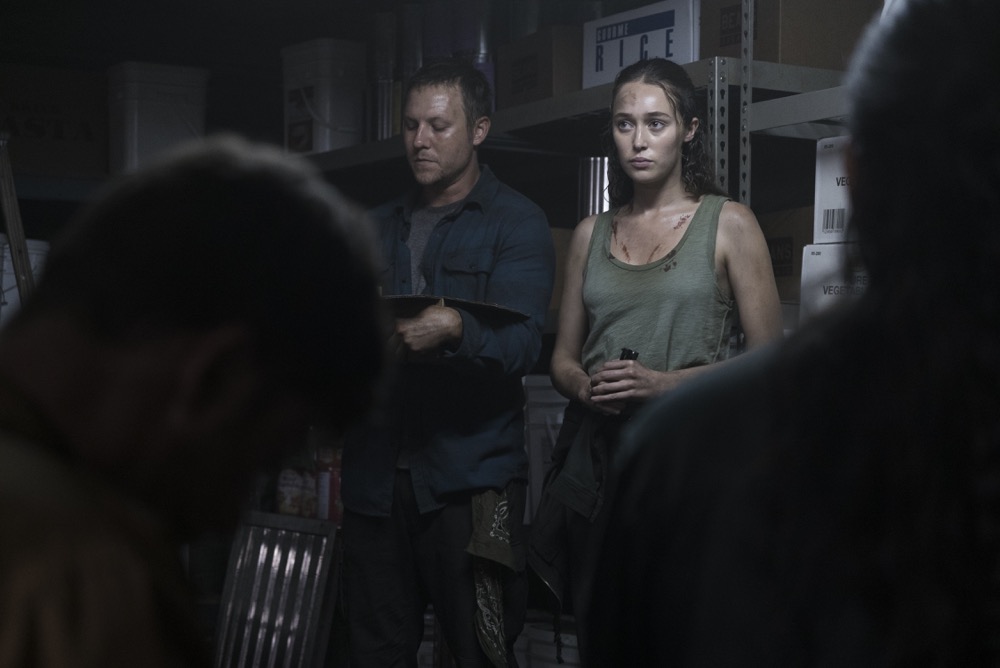 As Nick and Troy prepare to rescue the ranchers, Ofelia prepares to escape. Alicia administers morphine to one of the bitten and then wedges a knife into his skull. This is no easy task; Alicia cowers in a corner to weep. One of the bitten women reminds Alicia the people need her to be strong, and she takes it to heart.

Meanwhile, Nick fires the grenade launcher to distract the infected. He and Troy descend onto the ranch and plow their truck through the horde into a camper. Nick and Troy make a break for it, slicing through the horde until they’re forced to retreat in the helicopter. In the pantry, Alicia gives the morphine to the kid, who’s understandably emotional. She finds her strength and kills him, too. She then shares a childhood memory about Nick with the bitten woman. Alicia briefly falls asleep and then wakes up to find everyone in the pantry dead or passed out. 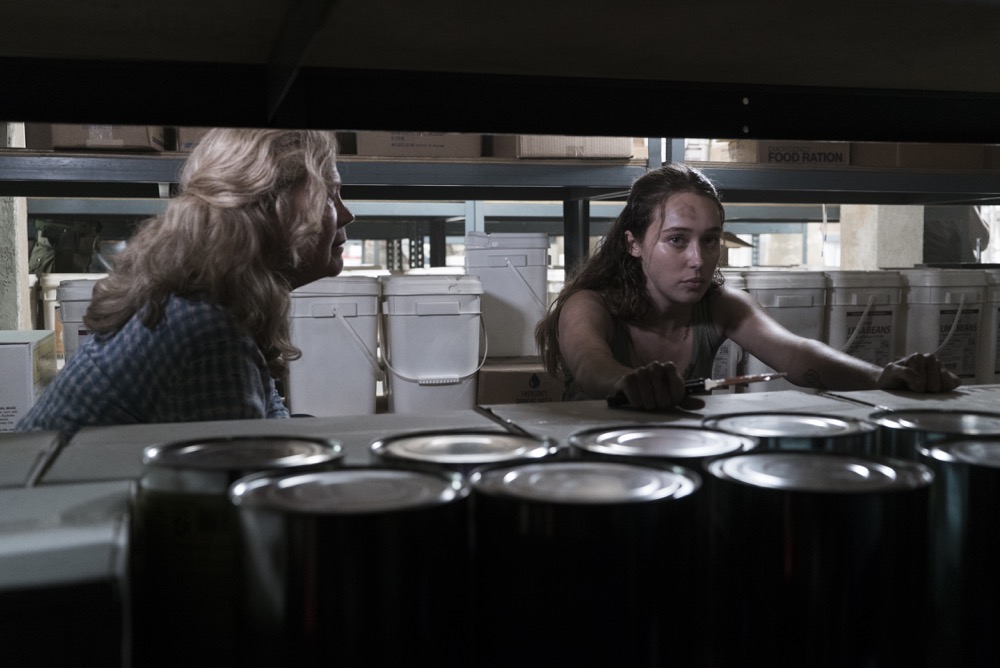 While walkers penetrate the helicopter windows, Alicia struggles to stay awake the oxygen-deprived pantry. One of the ranchers who turned attacks her and she’s forced to kill it. She passes out again as more ranchers begin turning around her. Meanwhile, Ofelia and Crazy Dog encounter a walker in the vents but Ofelia takes it out and continues her escape. Alicia wakes up again, kills more of the infected, and holes up in the armory. She takes a few out until Madison, Strand, Nick, Troy, and Walker arrive to rescue her. The older rancher she bonded with dies and Alicia relucatntly kills her for good.

Later, Madison tells Ofelia that Daniel’s alive and desperate to reunite with her at the dam. As Ofelia weeps at the news, Nick tells Alicia that Jake died from a bite wound. She inquires where the horde came from and Nick lies and says Troy tried to stop them. Alicia tells Madison she can’t join them in their trip to the dam because of the toll the apocalypse is taking on her and Madison reluctantly accepts. Alicia drives off to the place Jake told her about and Nick asks Madison to follow his sister for protection. She agrees to that too, but makes him take Troy with him. All three groups drive off. 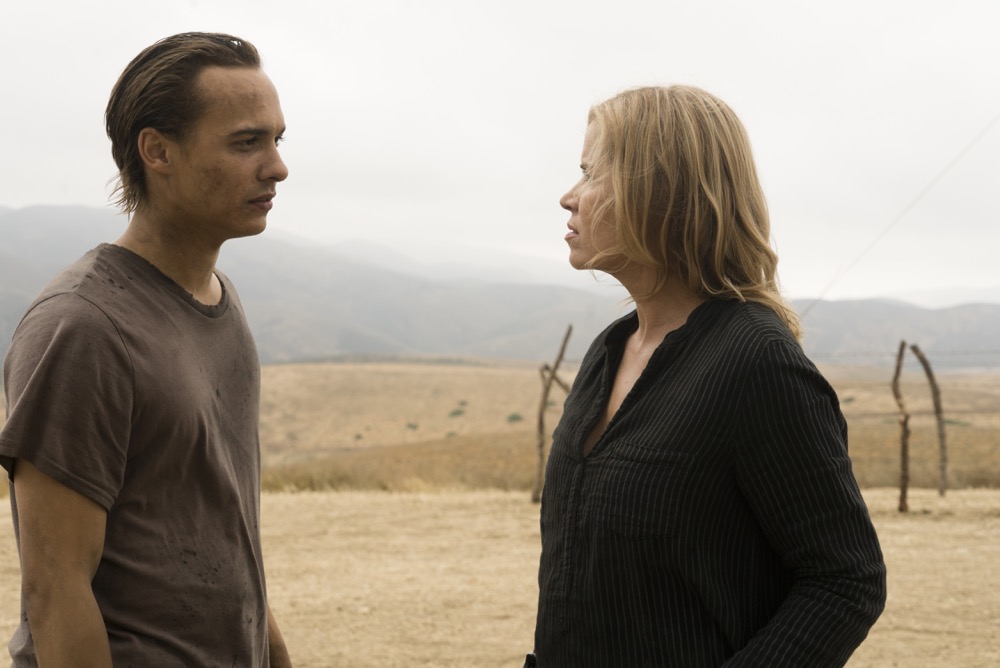