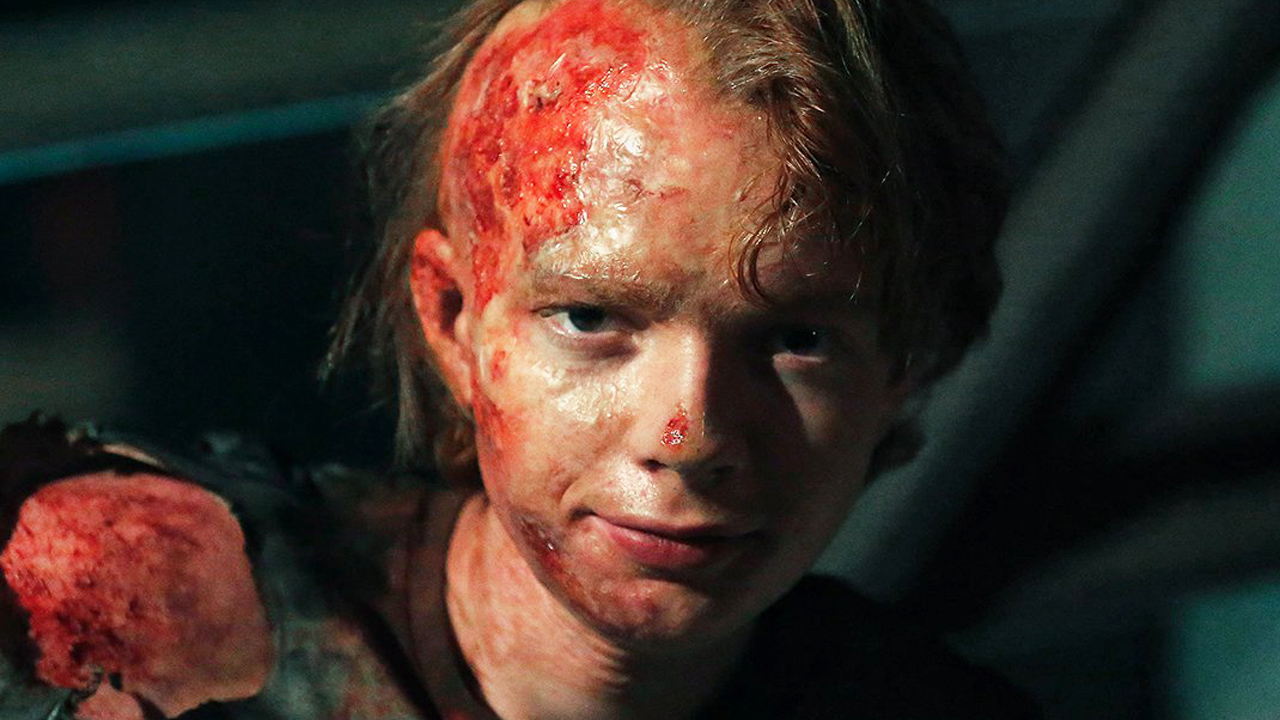 “The One I’ve Been Waiting For”

By habit Patricia leaves out dinner for Aaron before bed. Later that night she awakened by a noise in the kitchen; it’s Aaron standing in the dark. She turns on the light and shudders at his burned face. He blames Reverend Anderson’s and questions if she put him up to it. She says of course not and hugs him, reminding him she loves him.

Back at the lot Kyle interrogates Bob about his father’s past, reminding him reminding him he left him and his mother ages ago. Bob says his father probably thought they’d be better off that way. Reverend gets a call from Aaron, who says he’s been thinking about him before hanging up. Aaron tells his mom he’s happy to be his father’s son so he can soak up all the darkness.

Later, Reverend Anderson and Kyle show up at Patricia’s house to find her stabbed and covered in blood on the kitchen floor. Kyle notices the mark of the devil painted in blood on the wall when suddenly Patricia wakes up. Kyle calls an ambulance while Anderson tells her to stay with him. She says “no” before finally taking her last breath.

Megan takes Holly to dinner and recognizes the bus boy as the kid she saw the night she killed Mark. She grabs Holly and rushes out. Chief Giles shows up at Patricia’s house and tells Anderson he didn’t think Aaron was capable of murder, suggesting maybe the kid was possessed. Anderson said he wasn’t and Giles warns him he’s probably next on his list so he should stay at the station for now. Meanwhile, Megan and Holly get a hotel room.
Reverend Anderson calls Aaron on the road and tells him he’ll wait for him at the church. He hangs up and gives Kyle the option to leave, but he stays. Elsewhere, one of Giles’ cops visits Sidney to inform him about Aaron murdering his mother. She brings out Evelyn, one of the kidnapped ladies at the junk yard, who delivers Kyle’s message to Sidney. He’s surprised and tells her he wants this place up and running tomorrow – then instructs the cop to find Aaron.

At the church, Anderson grabs a box cutter and Kyle warns him not to take this too far. He reminds him he’s doing this for his family. Suddenly, a Molotov cocktail gets thrown through the window and immediately catches the room on fire. The find the door blocked from the other side but manage to break a window to escape. Anderson taunts Aaron outside, yelling he’ll have to do better than that.

Megan wakes up in the hotel room to find Holly missing. She locates her in the hallway talking to a man and scolds her for talking to strangers. The guy says, “She doesn’t really look like a killer to me” before warning Meg that if Holly keeps telling stories like that someone will believe her. Meg asks Holly if she wants to live in a foster home before breaking down and repeating “It was an accident.”

At the police station Giles berates Anderson for taking matters into his own hands. Kyle suggests they stop keeping secrets and start working together. Meanwhile, Sidney confronts the Mayor about Giles’ antics. The Mayor reminds him that he knows about his operation with Aaron so Sidney threatens to kill Giles. Kyle returns to the junkyard to talk to Bob, who tells him where his father used to live. Megan takes Holly to her foster mother’s house and later tells her she could have done more to help her as a kid.

Anderson calls Aaron to ask what he wants, and after a moment leaves the police station to return to the scene of the crime. Kyle does his own investigation at his father’s old trailer – he finds a driver’s license for a “Helen Devere” and a door covered in blood. He breaks it down and finds a chair with straps, probably used on Helen to help rid her of her demons.

Giles calls Kyle to ask if Anderson’s with him, and he angrily says no and rushes off. Anderson returns to the burned trailer and finally comes face to face with Aaron, who brushes off murdering his mother. He pulls a gun on Anderson and the Rev calls him a broken little boy. Aaron claims they’re going to bring the world on their heads and then instructs him to douse himself with kerosene. Anderson complies and Aaron lights a flare as Kyle drives up. Aaron throws the flare, Anderson dodges it, and runs off. Aaron runs through the woods and falls, where he finds Sidney. They get in his car and drive off as Kyle catches up and can only watch them drive away.

Holly tells Megan she doesn’t want to be put in a foster home and Megan assures her she’s the most important person to her. Anderson returns to Patricia’s home to clean up the devil’s mark.

Tell us what YOU thought of the episode in our comments!