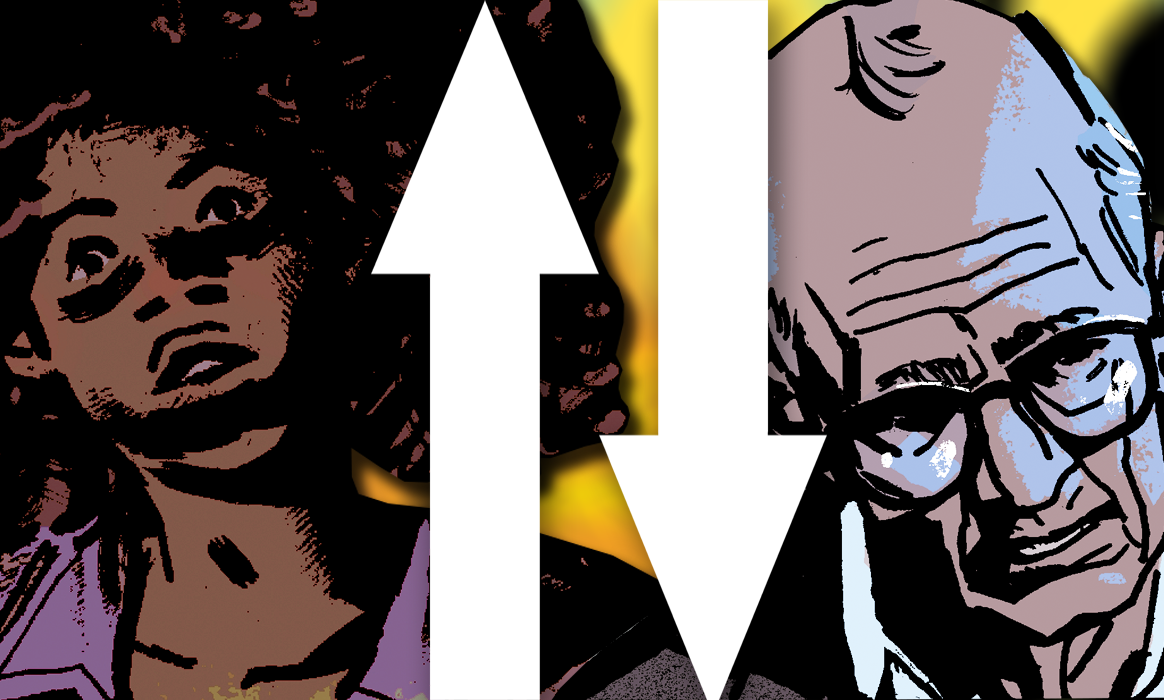 This month’s Outcast issue gave fans another epic battle between Kyle, Simon, and the merged people of Rome. We also met a new character and laid the seeds for a major upcoming story arc. Now let’s dive into which characters holds the most and least power in the series:

Simon’s training has been working – Kyle seems more confident and powerful than ever. Not only that, but Simon’s mission effectively rescued Daphne and struck a huge blow to the possessed Romans community. Is there any limit to his powers?

Kyle kicked plenty of ass this issue and even helped rescue a prisoner. Although she wasn’t the outcast Simon was searching for, she could still prove to be very useful to he and Simon’s cause. Don’t be surprised if Kyle eventually overtakes Simon as the most powerful character in the series.

Chief Giles was a real pal this issue for helping Mark work through his issues following his “accident.” As innocuous as the scene seemed, Giles is the sheriff of the town so we’ll keep him high up in the rankings.

The Rev only appeared once in this issue, and it was to talk with a kid (Logan) who witnessed Simon’s exorcism abilities at the gas station. Since the Rev has his own opinions on demons it will be fascinating to see how he handles Logan’s request.

Not much is known about Daphne at the moment but her potential can’t be ignored. If what she says is true and she really did learn skills from another outcast (Jennifer) it’s safe to say she could hold a lot of power.

Allison continues to be Kyle’s number one confidant. She’s definitely OK with him and Simon taking out a house full of the merged and because of that, she holds power.

Megan wasn’t in this issue and hasn’t been contributing a huge deal lately so we’re knocking her down a spot.

The merged and semi-merged people of Rome took major L’s this issue. They were forced to absorb the carnage Kyle and Simon inflicted in the last issue, got wrecked again by Kyle and Simon in a different house, lost a valuable hostage, AND lost one of their leaders who collapsed dead on the floor.

Aw, just look at her. Although Amber has definitely inherited some of her father’s abilities, they have yet to manifest themselves. So until they do, we’re keeping her out. Sorry, kid!

How did you feel about our new rankings following this issue? How will Daphne play into the story now? Will the Rev convert Logan into a religious nut? Tell us YOUR thoughts in the comments.

A Look Ahead At Telltale's The Walking Dead: The Final Season