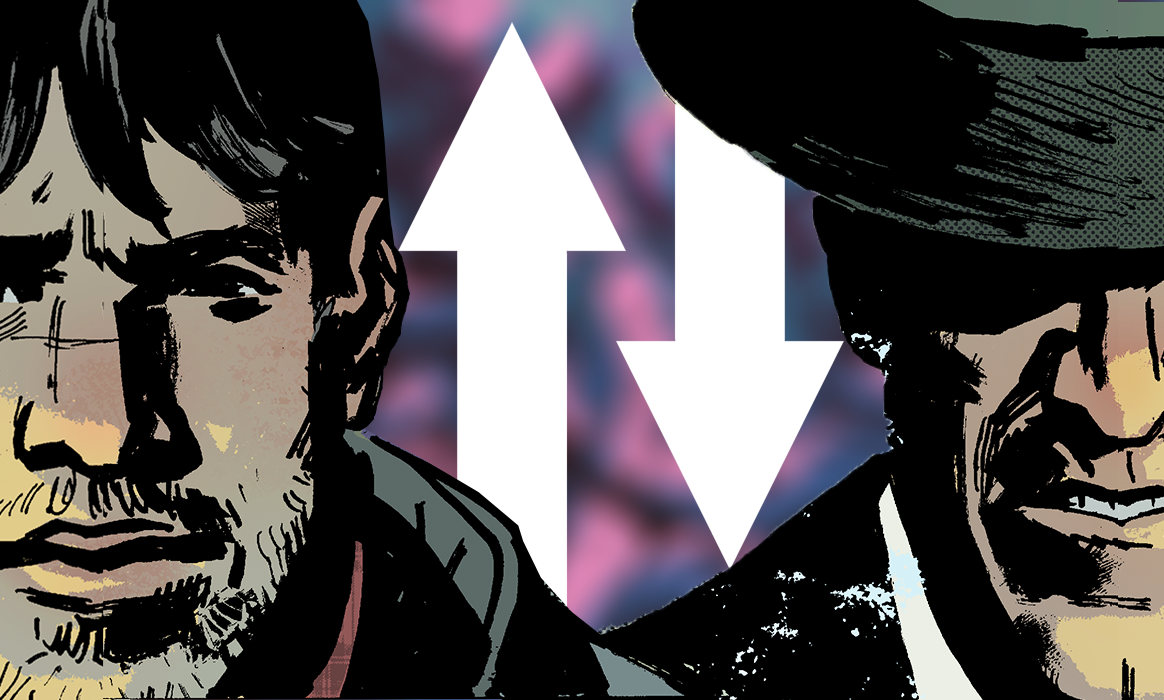 The world of Outcast is perpetually being manipulated by those who hold power. The ones at the top seek to protect their own while those below try to usurp their leaders. Amidst the chaos, we’ve broken down how the major characters of Outcast rank in the power scale after Issue #23. From here on out we’ll re-work the list following each issue to help understand the balance of power.

Kyle’s been through a rollercoaster of events these past few issues. Thanks to Reverend Anderson, Kyle was able to escape from Sidney’s clutches and CAPTURED HIM IN HIS TRUNK! Although it’s unclear how this plan will work, for the moment Kyle (finally) holds the most power in Outcast.

Sidney’s been on top for a while; he controls half the community, kidnaps people, and is responsible for countless deaths. BUT, after Reverend Anderson thwarted his plans he’s been taken down a peg. It all came to a head in Issue #23, when Kyle AGAIN refused his membership, tied him up, and threw him in his trunk. How’s it feel to be on the other side for once, Sid?

The troubled preacher has REALLY been clutch in the past few issues. He found Kyle, got kidnapped, broke out of the chair he was tied to, stabbed one of his captors, set a fire in the evil meeting place, tackled Sidney, and rescued Kyle. It doesn’t get more badass than that.

Fine, a large group of people don’t seem like they should get their own spot but collectively, they hold a lot of power! They help possess others, conspire against Kyle, and stare menacingly at his daughter on the street. Cool it, guys! As much power as they hold, The Rev DID burn down their meeting place, which sent them fleeing.

Chief Giles is a powerful man in the town that’s taken some heavy L’s recently. Although he JUST got the demon beat out of him his wife, Rose is still afflicted. Not only that, but the town seems to be rallying against him. Giles may be broken but he’s now more motivated than ever to set things straight in the community he protects.

After surviving possession Megan hasn’t really done much other than curse at people trying to install a wheelchair ramp onto her home. However cold she seems, she does control her own family and is determined not to let anyone get in her way.

Mark used to be a larger power holder but the whole Megan throwing him out of a top floor window rendering him unable to walk didn’t help. For the moment, Mark’s on leave from work and trying to deal with his crumbling marriage.

Whether it’s protecting her daughter from her father or deciding on magnet schools, Allison Barnes tries to do what’s best for her child. Although she’s been oblivious to the events around her it seems (as seen in Issue #20) she’s becoming more aware as the days go on.

There’s more to Kyle’s precocious daughter Amber than meets the eye. She knows more than her mother – like how it was Allison, not Kyle that hurt her. She seems to be impervious to demons, and if the show’s any indication, we can expect more exciting things from Amber in the future.

We feel like there could be some upside with Kyle’s comatose mother. For example, she moved her eye during Kyle’s last visit…that’s huge! But let’s be honest, she’s still stuck motionless in her bed and in these power rankings.

What did YOU think of our rankings?? Would you rank anyone higher or lower? We’re willing to listen to arguments for Sarah being at the top! Tell us in our comments: