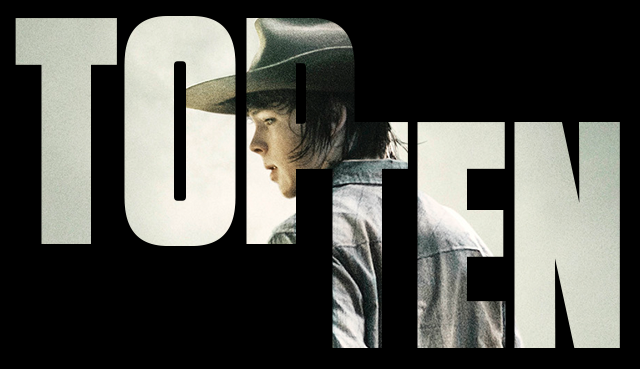 The epic shot, the perfect casting, and all of it a huge CLIFFHANGER to the episode! Especially for fans of the comic, this moment was one we had been waiting for all throughout Season 4.

It was a metaphor that involved fire, and it was set to some great tunes. What more could you ask for? But seriously, delving deeper into Daryl and Beth was a breath of fresh air for the series, and watching them grow together and then flip off the blaze at the end was perfect.

We all knew she was a bad ass, but damn.

RICH BITCH. The hanging walkers. This sequence had some of the coolest imagery of the season and opened up a new part of the world of The Walking Dead.

Also, when Glenn takes off running after seeing Maggie’s sign. Also also, when they burn the photo because they’ll never be apart. And then the kiss in front of the headlights!? There were a lot of feels, is what I’m saying.

Something is amiss, but when the group arrives at the end of “Us” it’s not quite clear what. Who is Mary, and why does she have so much BBQ? Is she the woman with the sunflowers from the house? Where is everyone!?

Carol has had to go through so much, and now this!? It was shocking, it was controversial, it was heart-wrenching… it was ALMOST the biggest moment of the season!