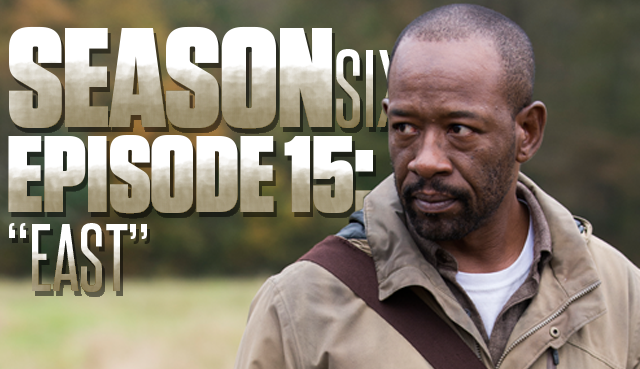 The episode opens ambiguously with close ups of blood, a flattened car wheel, and Carol’s rosary abandoned on the ground. Looks like Carol found herself in some trouble outside the walls of Alexandria. Rewind to before Carol wrote her farewell note at the end of 614. She and Tobin share one last moment before she sneaks out that night. The next morning Glenn and Maggie share a shower, Abraham and Sasha share a romantic moment, and Rick & Michonne share an apple. Rick assures Michonne that they’ll fight to protect Alexandria no matter who tries to attack.

Daryl rides out of Alexandria and Glenn, Michonne, and Rosita follow behind. Morgan and Rick soon follow after. Carol drives in the stolen car with spears (looking like Mad Max) and finds herself under fire by a truck of Saviors driving the opposite direction. Her tires blow out and the Saviors implore her to get out of the car.

She plays innocent but they know she has pertinent information. “I’m nobody, really. Nancy…from Montclaire,” she lies. They figure out she’s from Alexandria and offer to give her a ride back. She begins hyperventilating and begs them to leave before someone gets hurt. They move to grab but she mows them down with a machine gun that she hid in her giant coat sleeve.

The driver survives and starts shooting at Carol. She narrowly avoids the bullets and shoves one of the car spikes into his chest. She takes his gun and tells one of the remaining survivors to come out slowly. Later, the passenger wakes up to discover the bloody scene around him. Morgan and Rick arrive and try to piece together the details. Rick questions one and then stabs him in the head after he doesn’t respond. Rick can’t help but feel proud of Carol for taking them all down. They proceed on foot to search for her while the passenger returns to the scene and follows them.

Meanwhile, Glenn, Michonne, and Rosita return to the tracks where Denise was killed. Michonne discovers Daryl’s bike nearby while Rosita has second thoughts about helping him. Later, they find Daryl in the woods and try talking him out of finding Dwight. “It’s going to go wrong out here,” Glenn pleads. Daryl proceeds with Rosita while Glenn and Michonne follow behind. Glenn and Michonne find themselves surrounded by The Saviors and Dwight, who points a gun at them. 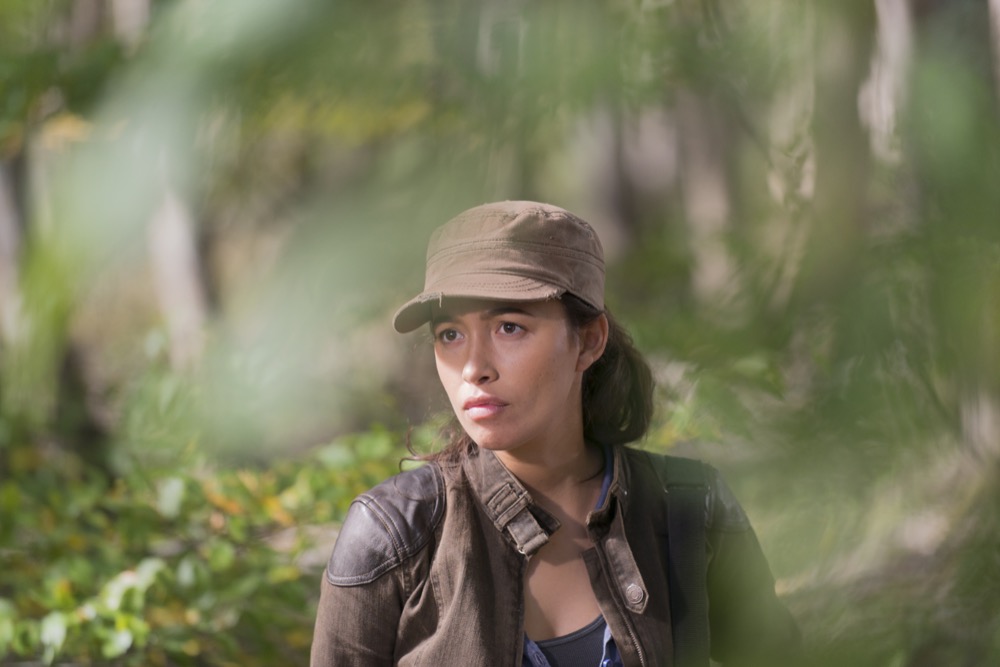 Morgan tells Rick he heard about the prison incident where he sent Carol away for killing two of their own. Rick says he’d side with Carol if it happened now. They arrive at a barn and confront a survivor who claims he’s trying to find his horse. The man gets away and Morgan prevents Rick from shooting him. “I don’t take chances anymore,” Rick reasons. Morgan tells Rick about the main wolf he kept prisoner in Alexandria. “You had one of them alive…in the community?” Rick asks, dumbfounded. Morgan tells him about the Wolf saving Denise and Denise later saving Carl. “It’s all a circle,” Morgan concludes. Morgan tells Rick to return to Alexandria while he continues the search for Carol. Rick hands him a gun for protection. In a rare moment of friendliness, Rick adds, “Michonne DID steal that protein bar.” 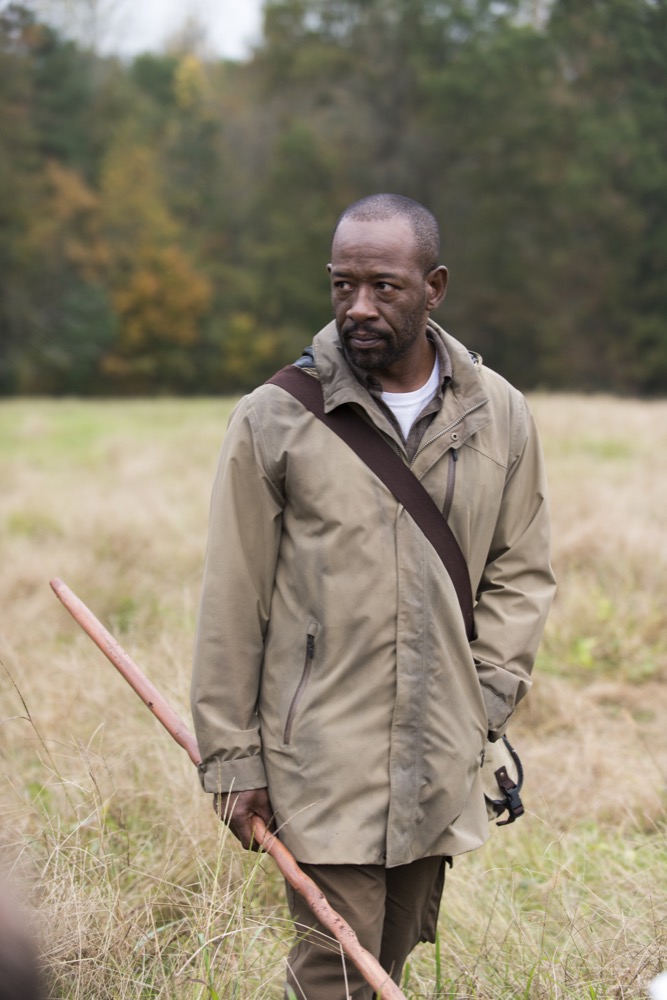 Rick returns to Alexandria and discovers Michonne is still out there. Enid cuts Maggie’s hair and Maggie experiences excruciating baby pains. Back to the woods, Glenn and Michonne are tied up and Daryl arrives to rescue them. Suddenly, Dwight appears behind Daryl and SHOOTS HIM IN THE BAAAAAAAAAACK!!! 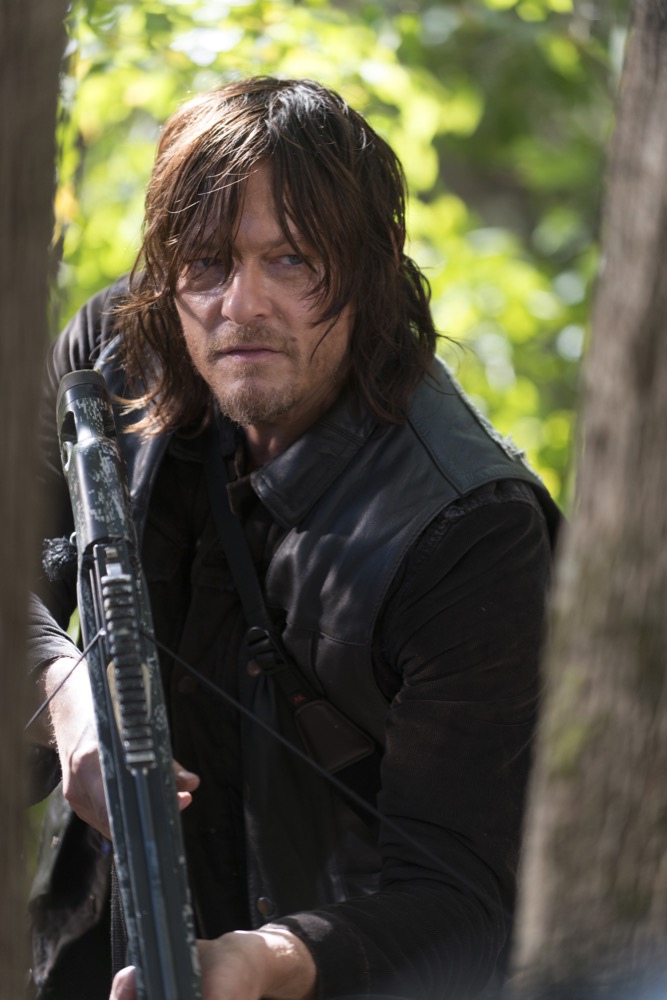