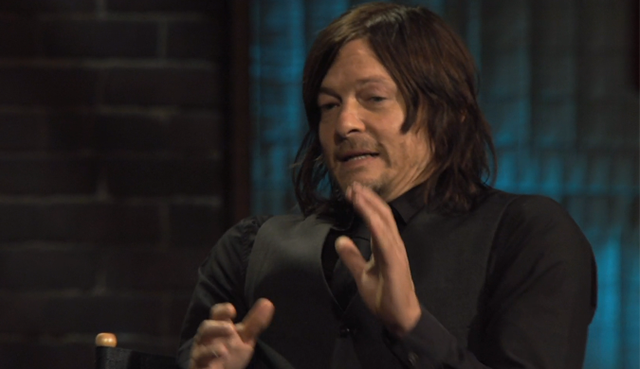 Bravo’s recent Walking Dead-centered episode of Inside The Actor’s Studio provided us with INCREDIBLE stories from the cast. Among them was Norman Reedus’ brush with death a decade ago. Watch the video below to hear Reedus’ harrowing story about nearly dying while attending the Berlin Film Festival:

For the international fans who can’t see the video, Reedus explains he attended the Berlin Film Festival to receive the Rising Star Award back in 2005. The night before he borrowed R.E.M. lead-singer Michael Stipe’s car and was struck by an 18-wheeler, catapulting him through the windshield and onto the road. Next thing he knew he woke up covered in glass, and then later was in the hospital where he received a titanium eye socket and screws in his nose. “I had to have multiple surgeries because your face will break in a series of ways, and I was down to the second to the last break,” Reedus recalls. “I kind of looked like a hamburger.” Despite some grimaces from the nursing staff, Reedus thankfully lived to tell the tale.