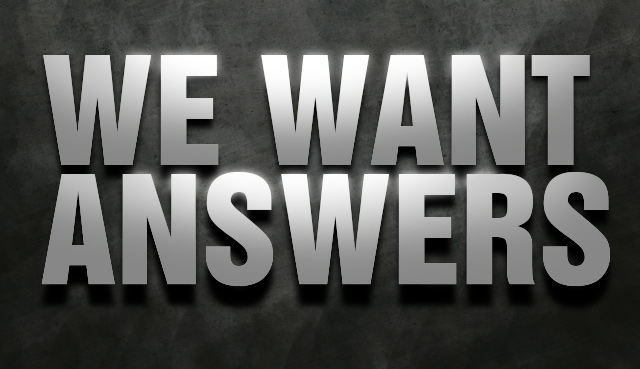 The mid-season finale left us with some burning questions, and we’ve been getting asked them non-stop over Twitter and Facebook. Robert’s been pretty tight-lipped around the office, so here are 5 questions we’ve been asked (and we’re asking) that we hope get answered before the end of the season.

01. Lil Ass Kicker: alive or dead? The last we saw of baby Judith was an empty, bloody car seat. Who grabbed her? A walker or a survivor? People still ask us if Walker Lori is going to show up, so hopefully we get a definitive answer. But if a baby zombie shows up I’m saving that GIF forever.

02. How will everyone find each other? Our group is scattered after the prison attack, and we know via interviews that we’ll have some separate stories coming up, but how long will it take to come back together? When will that happen? Will everyone make it back?

03. Who was that voice on the radio? Remember when everyone got so distracted by a mysterious voice over the radio that they managed to get into a five walker pileup? Who was that? What’s the sanctuary they’re speaking of? Is it safe? Is it Alexandria? The Kingdom? The Hilltop? They have enough power to transmit over the airwaves…

04. Where’s Carol at? Sent packing by Rick—in part to protect her—will Carol make it back to the group? What will happen when she does? How will Daryl react? How will Tyreese?

05. Will we get to see a walker version of The Governor? It was implied that he was shot in the head, but…

What questions do you guys want to see tackled in the back half of season 4?

Search for the Best Zombie Couple!