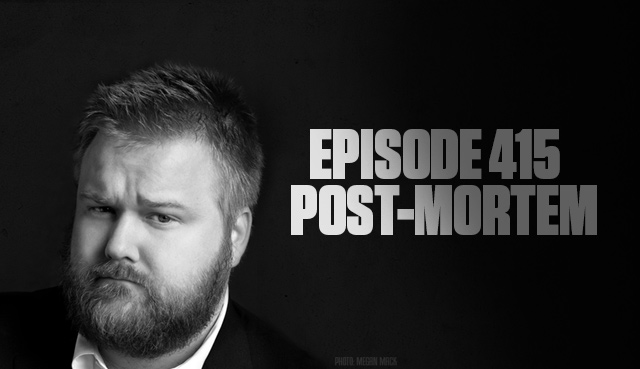 Welcome back to our weekly post-mortem with TWD-creator Robert Kirkman. This week we discuss racial diversity, comedy, Telltale crossover possibilities, and happy endings!

TheWalkingDead.com: This episode we saw a lot more of the dynamic between Abraham, Rosita and Eugene—why did you decide to stay so faithful to the comics for these characters in particular? Is this showrunner Scott Gimple’s influence?

Robert Kirkman: Yeah, Scott Gimple is definitely a guy who is a fan of the comic and he’s certainly a fan of those characters. But also, I think that the storyline with Eugene, Rosita and Abraham and their mission to get to Washington, D.C. is a big part of what we’re going to be doing with the show in the foreseeable future. If you know the comics, you may have somewhat of a rough idea as to where things might possibly be headed, and we’re keeping that storyline fairly faithful when it comes to those characters. And I think keeping them on model, so to speak, is an important part of what we’re doing moving forward.

TWD: Eugene’s shaping up to be a funny character. We chortled when he awkwardly gives Tara that sendoff. Did Josh McDermitt’s comedic background play at all into the way you shaped Eugene? Or did you always look at Eugene as more of a comedic character?

RK: Scott and I, and all of the writers in the writers’ room, definitely look at Eugene as a character where there is certainly some room to bring a little bit of levity to a situation. But I will say that Josh McDermitt’s audition was possibly the funniest thing I’ve ever seen. I hope that they put it on a DVD or something because it was awesome. There was also a fun bit of writing where—I think it was Seth and Scott—they wrote a scene at Eugene’s high school reunion because we wanted to play with the character and see what the actor could do, so it wasn’t a scene from the show. It was really just a great scene and Josh killed it. So when you know that you can really lean on an actor for certain kinds of things, it really inspires you, when you’re writing scripts, to do that kind of stuff, and his background is certainly a big part of that.

TWD: Is there any concern there with getting too comedic?

RK: No, I think that we’ve got a good balance. Certainly, if you were to get too comedic with things, there’s always a chance that you could make the darker elements of the show seems less important or less real, but I think there’s room for that and that we’re towing that line pretty closely.

RK: I mean, I feel like we’re not doing enough, so… it’s definitely intentional. We haven’t had a Muslim character, that’s certainly something that has been on my mind. I think it’s important to finally make a concerted effort to show the diversity of the American population and I especially feel a responsibility, because the show is so popular and watched, to use it as an opportunity to get the diverse characters you don’t normally see on television. I feel like it would be wrong for us not to use that as an opportunity. And everyone on the show is invested in telling great stories and adapting the comic book and honoring what we do in the comic and certainly some of that comes from the comic, but it’s really just a matter of telling interesting stories, and those characters and their backgrounds certainly add interesting elements to the stories in the show. I hope we’ll continue that trend moving forward.

TWD: The cave in this episode was gnarly. I keep waiting for you guys to run out of cool ways to come up with zombies—

TWD: Do you remember who came up with that sedimentary glob of zombies stuck in dirt?

RK: I know that Scott Gimple definitely had a very developed roadmap for the back half of this season, so I would wager that he had a big hand in coming up with that sequence. Then Seth and Angela would have definitely flesh it out, so it would have been a collaboration between the three of them. I can say definitely that I had nothing to do with that, so if you like it, don’t give me any credit, thank you very much.

TWD: The group of survivors that Daryl joins have their own honor code and set of rules that are reminiscent of the Saviors in the comics. Where do you usually start when building a new community—with their leader? Or their group dynamic? Or where they’re from originally?

RK: It begins with how do people survive in this world, what are the different ways, and that help you come up with different rules and different methods and things that can turn into a group. A leader can emerge from that or you can start with a leader, but a lot of different things go into the different groups that we encounter and there isn’t one set way of coming up with things.

TWD: Something we haven’t discussed yet is the possibility of some crossover with the Telltale Games. Will we ever see anyone from that universe appear in the show?

RK: I couldn’t rule it out entirely, but there are currently no plans. It’s not impossible. There could be characters from the game that make their way into the show, but like I said, no plans as of yet.

TWD: Can you tell us anything about Terminus? Is it good news, or bad news?

RK: Terminus could be what it is on face value or it could be hiding something darker. We do try to change things up, so it’s entirely within the realm of possibility that Terminus is all lemonade and sunshine and recliners and pajamas. So we’ll see, maybe this season has a happy ending.

A hearty laugh was enjoyed by both parties after that last one. See you guys next week for the finale!

How Will Season 4 End?

Episode 415: Us – Recap and Discussion