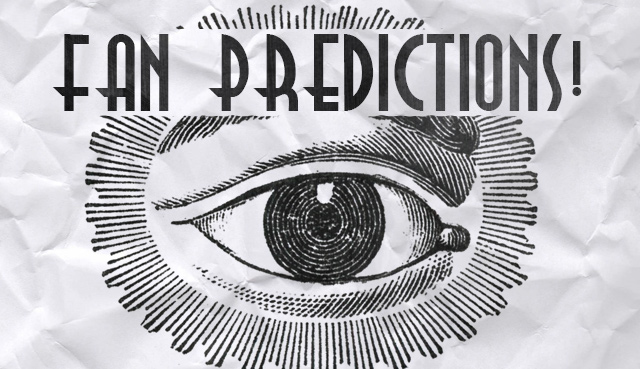 How Will Season 4 End?

We’ve heard a lot of theories about how Season 4 will end, from Twitter, Facebook, and online communities like RoamersAndLurkers and r/thewalkingdead. So we decided to list off some of the most popular predictions we’ve spotted across the web. If we’re missing your favorite theory, make sure you comment below! Over the next two Sundays, we’ll see who was right…!

Prediction: Joe’s group are The Hunters, but Daryl doesn’t realize until they run into one of the groups of survivors… and try to eat them.

Prediction: Everyone regroups at Terminus and then Rick and Abraham collide as Abe tries to steer them to Washington, DC.

Reasoning: After the prison falls in the comics, all of the characters regroup at Hershel’s farm and the Rick-Abe struggle begins. Ending the season on a “We’re off to Washington!” beat would also add a note of finality to this season.

Prediction: Everyone reunites at Terminus and they think they’re safe… until someone gets picked off by The Hunters!

Reasoning: The Hunters target Dale and kidnap him in the comics while the group is holed up in a church. Wouldn’t it make sense to lure people to one place and then pick them off from there?

Prediction: The survivors meet up with Beth and Father Gabriel at Terminus, which is actually Gabriel’s Church from the comics.

Reasoning: The car that potentially kidnapped Beth had a cross on the back, ergo Gabriel, and Terminus clearly has resources (maps, radio broadcasting) and might be a stand in for the town where the group temporarily settles in the comics.

Prediction: Terminus is abandoned and destroyed when the first group arrives, but the question is… who destroyed it?

Reasoning: Terminus might have been a sanctuary for all at one point, but of course it’s just too good to be true.

Home | The Walking Dead | How Will Season 4 End?