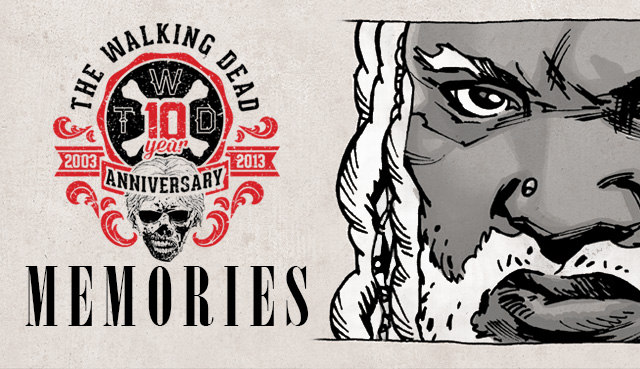 I can’t remember WHY I bought it.

I wasn’t THAT into horror. Or zombies. But I was looking for something that was NEW. Image? I grew up on Image, but October 2003 Image felt nothing like what had got me hooked.

I bought it at Forbidden Planet on 13th & Broadway, which wasn’t my regular store, and I’m pretty sure that was the only thing I bought that day. Your attention span dies in New York. When you can walk four blocks to buy a comic, to get your fix, you will do that just because you can. So I probably dipped in after work and…

That was the only issue of THE WALKING DEAD I ever bought.

This was when trade waiting seemed almost revolutionary. I wasn’t a collector. I liked the story and the art and started picking it up every six months instead. Charlie came aboard in the second trade; I loved CODEFLESH (enough to chase it from Image to Funk-o-Tron).  When money got lean I waited a year and picked up two trades at once. I’d try not to breeze through them; it was impossible. I got impatient.

And still… that WALKING DEAD #1 sat buried in my collection.

Moving from Manhattan to Queens, you learn there’s such a thing as too many comics. This was two, maybe three years later. And looking through everything I had… yeah, I could sell THE WALKING DEAD, no problem. Put it up on eBay…

Still, you could say I came out on top.

Sean Mackiewicz is the Editorial Director for Skybound Entertainment. Sean edited superheroes for DC Comics and made love for Harlequin Books. He’d like things to be a little more professional at Skybound.