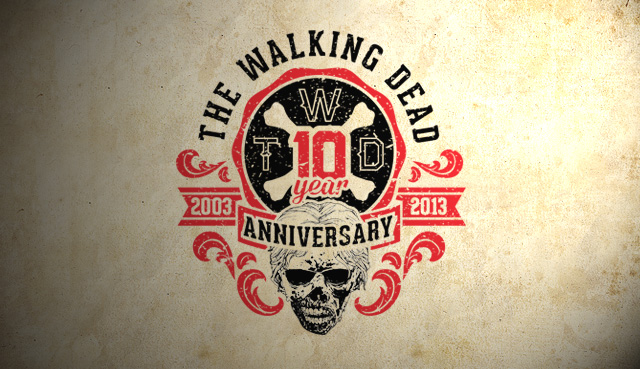 Wow! 10 years ago TODAY The Walking Dead hit comic shops all over and immediately… didn’t sell that well. But it grew FAST and here we are 10 years later with the #1 cable TV show, zombie runs on aircraft carriers, making best-seller lists, novels, game-of-the-year honors—it goes on and on. It really is amazing. So today and this week we’ll be taking a look back (and into the future) on the site and at New York Comic Con. To kick things off, I’ve made some Facebook covers (Rick, Carl, Andrea, Michonne, Jesus, Negan, Ezekiel, and Shiva!!!) and wallpapers for you with our awesome 10th Anniversary seal that’s going to be on a shirt at a New York Comic Con near you!

Click on over to our EXTRAS section and show the world your TWD pride!