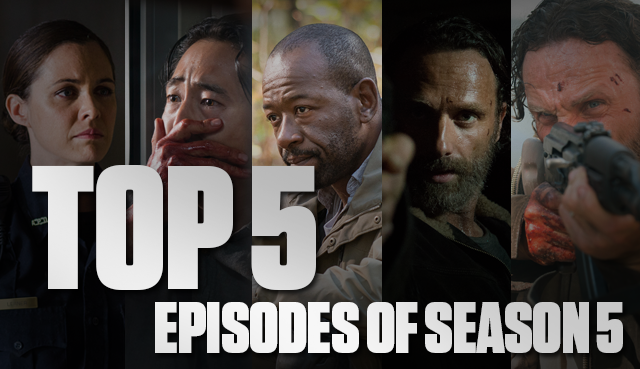 Now that The Walking Dead season 5 has come to an end, we’ve had some time to reflect on the season as a whole. Through a very scientific calculation of IMDb’s episode rankings, fan opinions, and our personal favorites, we’ve ranked the Top 5 Episodes from the fifth season below:

It’s the episode the entire first half of Season 5 is building to. It opens with some great action (car chases!?) followed by an attempted peaceful trade with the corrupt Grady cops. But the exchange ends in tragedy when Dawn shoots Beth, arguably one of the most shocking and enraging deaths of the entire series. This episode left us as heartbroken as Maggie and Daryl, and that’s part of what makes the show so good.

Betrayal. Death. Redemption. This episode packed one hell of a punch. Not only did we lose Noah in one of the most gruesome TV-deaths ever, but Eugene, Abraham, Glenn and Carol all got moments to shine. And then on top of it all, Father Gabriel stole the show and cemented himself as one of the most-hated characters on the show after his breakdown and subsequent confession to Deanna.

This extended episode used every moment. Conflicts brewing the entire season finally exploded and several characters completed satisfying and powerful arcs (Sasha, Daryl, Rick, Michonne, Deanna… the list goes on and on). Not to mention Morgan’s return (!!!) and the first real glimpse of the Wolves. A great finale for sure, and one that leaves us eager for Season 6…

The title says it all. This episode is as nuanced as it is bloody, featuring several difficult decisions and at least two crises of faith. We get to see the Ricksterminator deal with the Termites, and Sasha deal with Bob, and Maggie deal with God—this episode is just packed.

Tied on IMDb for the highest rated episode of The Walking Dead ever, it’s hard not to place this explosive season return in the top slot. Not only does it deliver on the action, it’s helmed by some great character conflicts (Tyreese’s moral standoff, for example) and infused with a dramatic core (the flashbacks to Gareth’s group being abused). So good.

Do you agree with our choices for the top episodes this season? Comment below with your own rankings, and also vote in our mini poll for best episode: