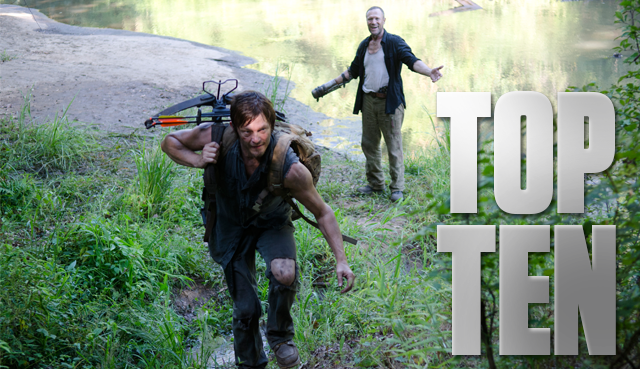 With such a Daryl-centric episode on the horizon, we took to Twitter to ask people their favorite #DarylMemories. Inspired by their responses, we decided to make a list of our own! We present, in a very particular order, our top Daryl Dixon moments from the last four seasons.

10. Getting up in Bob’s face about the booze

After Bob puts the whole group in jeopardy in Episode 404, “Indifference,” Daryl takes a no-nonsense approach to dealing with the situation. “You take one sip before those meds get in our people and I will BEAT your ass. You hear me?” Our hero!

9. Daryl on the bridge slamming a walker’s head in the trunk! Nice!

From Episode 310, “Home.” Not much more needs to be said about that one. Don’t click this if you’re eating.

Bloody and bruised, Daryl wakes up to find Merle scolding him for searching for Sophia but not him. Daryl realizes it’s a hallucination when he sees that Merle still has his right hand, but that doesn’t make it any less eerie when Merle warns him that the group will never care for him like his brother.

We first heard tale of Daryl right after Merle is left to die on the roof, but it was his actual entrance that left an impression. He emerges from the woods trailing a deer, only to find it being snacked on by a walker. His response? Crossbow bolt to the head. We instantly loved that weapon, and it would grow to be a fan favorite.

6. The Cherokee rose for Sophia! UGH!

“It’s a Cherokee Rose. The story is that when American soldiers were moving Indians off their land on the Trail of Tears, the Cherokee mothers were grieving and crying so much ’cause they were losing their little ones along the way from exposure and disease and starvation. A lot of them just disappeared. So the elders, they said a prayer; asked for a sign to uplift the mothers’ spirits, give them strength and hope. The next day this rose started to grow where the mothers’ tears fell. I’m not fool enough to think there’s any flowers blooming for my brother. But I believe this one bloomed for your little girl.”

5. When he ended Dale’s suffering

When Rick hesitates to kill Dale, Daryl is there to finish the job. And later, when Carol has her doubts about Rick’s leadership, Daryl shuts her down and reassures her that Rick is still a man of honor. This is the moment when we know Daryl is going to be Rick’s loyal right-hand man. RIP Dale!

4. When he had to kill Merle

And then when he cries, and falls to the ground? HEARTBREAKING.

3. When he defended Glenn

No moment has made his character development through the television series more clear. He’s come a long way from Season 1, and this moment proves it when he correct Merle that Glenn is, in fact, Korean.

2. Grenade down the Tank

It spawned several memes (“I’ve got a tank. We’ve got a Daryl.” and “You brought a tank to a Daryl fight!” to name a few) and may go down in TWD history as one of the most coolest moments in the show. The way he pitches it effortlessly… so good.

Nothing says badass with a heart of gold like this moment.

Do you think we left anything out? What are your favorite Daryl moments? Let us know in the comments!