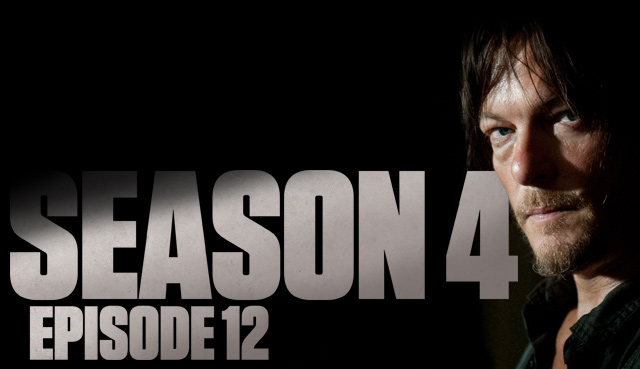 Well, for anyone missing Daryl last week, you’re in for a treat this week! All Daryl, all the time! The last we saw of Daryl and Beth they were tracking survivors from the prison, their friendship somewhat strained by their attitudes: Daryl pessimistic, Beth hopeful.

This week continues with them on the road. It’s night time and Daryl and Beth burst out of the woods, and quickly duck into the trunk of a Caddy as walkers swarm the car. Come morning, things have pretty much cleared out and the two scavenge what they can from the area.

They set up a camp in the woods, and after missing a squirrel, Daryl manages to bag a rattlesnake. Tasty! As Daryl continues to act surly Beth says she wants her first drink now that Hershel’s no longer around. Daryl remains completely unresponsive and Beth walks off.

After an encounter with some walkers, Beth says she’s moving on AND getting that drink while she’s at it. Next stop: country club!

The inside of the country club may have been nice at some point but now it’s a horror show. The attempted group suicide did not go as plan: we see a handful of walkers hanging by their necks from the rafters, all moans and gurgles.

Beth finds a souvenir spoon from Washington, DC (foreshadowing?!) while Daryl loots (Beth: “What are you doing?”) until walkers start breaking through the door. They move further into the darkened country club. Beth makes a play for some cooking sherry and gets ambushed by a walker. She kills and then sarcastically thanks Daryl for his help. “You said you could take care of yourself. You did.”

The search continues into the merch department. Daryl does some looting. Beth does some shopping. There’s a corpse pinned to the wall with sign on her chest: RICH BITCH. Looks like things went poorly at the country club at the end.

Walkers approach the sound of a clock chiming and Daryl decides to fight them off. Crossbow, golf club, handheld arrow. He tees off (almost literally) on the last one, taking out some pent up aggression.

Beth gives a rousing speech about having a drink and hits the bar. Daryl pulls a map off the wall while Beth gets ready to drink some peach schnapps. Daryl throws darts at pictures of the founder of the club while Beth starts crying, I’m assuming because all the nice whiskeys are gone. Before she can take a swig Daryl smashes the bottle of schnapps on the ground. “I ain’t gonna have your first drink be no damn peach schnapps.”

As they make their way through the woods, Beth plays everyone’s favorite game: Guess Daryl’s Occupation. Daryl doesn’t see how it matters what he did.

They find a place that Daryl says he found with Michonne, a moonshiner’s place. He pours Beth a glass of moonshine. You know what’s worse than Peach Schnapps? Poison-ass moon shine. Beth sips it and unrealistically does not have an uncontrollable coughing fit.

Daryl explains how he recognized the place for what it is because his dad had a place just like it. Then the drinking starts.

They play Never Have I Never. It doesn’t get very far before Daryl finds it too invasive (he doesn’t like that Beth assumed he’d done hard time). But we do learn that Daryl has never left Georgia or been on vacation (or eaten frozen yogurt or had a pet pony). Daryl ends the game by taking a piss. In the corner. And then accusing Beth of all sorts of things. He forces Beth outside to teach her how to shoot a crossbow which doesn’t go very well.

They end up yelling at each other. Beth’s angry that Daryl’s shut down. She thinks that he doesn’t esteem her like he does the stronger women in the group. It kind of comes out that Daryl blames himself for what happened at the prison. He starts crying and women all over America suddenly become pregnant.

That night Daryl tells a story about getting in a fight with Merle’s dealer and how he almost died because Merle made a joke about a cartoon with a talking dog in it (Science Dog?!). He then says that what he did before the outbreak was follow Merle around. He just did whatever Merle said they were doing that day. Who had “bum” in the Daryl Occupation Pool?

Beth starts talking about all the people she misses and the things that won’t happen—Maggie and Glenn having a baby and her dad being a grandfather. Beth says that she’ll die on Daryl some day too. She says that Daryl will be the last man standing. “You have to stay who you are, not who you were.” Beth says that Daryl has to put places like this behind him or it’ll kill him. “We should go inside,” says Daryl. “We should burn it down,” says Beth.

They torch the house, the surrogate for Daryl’s dad’s cabin and—ultimately—his crummy childhood, as The Mountain Goats’ “Up the Wolves” plays. They flip the bird at the structure fire and Daryl smiles as the two walk away from burning house.

What did you guys think of the episode?!
Has Daryl put his demons to rest?
What’s the dynamic between Daryl and Beth?
What happens next?!

Lizzy and I will pick our favorite comment (not necessarily the one with the most upvotes) to win a 10″ Daryl Dixon figure from McFarlane! Your comment should bring deeper understanding of the characters or episode, entertain us, be smart, and engage other readers. Or maybe it’s just something personal that ties you to the show. In short, something that makes the comment section a good read.

PS: Here’s what The Mountain Goats’ John Darnielle has to say about the song:

“I’m always trying to figure out what to say about this god damn song… I think it’s a song about the moment in your quest for revenge when you learn to embrace the futility of it. The moment when you know that the thing you want is ridiculous and pompous and a terrible thing to want anyway. The direction in which you’re headed is not the direction in which you want to go, yet you’re going to head that way a while longer anyway cause that’s just the kind of person you are.”

Fairly on the nose.

UPDATE! A Cat That’s Blue has our favorite comment and gets a badass McFarlane Daryl fig: “I’d initially thought the broken/worn out arrow was going to be a bigger ‘thing’ you know, sort of a plot device they’d have to deal with, that Daryl’s been overrelying on that weapon and it eventually wears out. I kind of like that it was more symbolic, honestly, that it he showed that *they* were wearing out, losing their edge. And Beth using the mirror to start the fire was a neat foreshadowing of the end of the episode. Not just the fire itself, but that the fire happened as a result of really, truly ‘seeing themselves’, not in a mirror, but seeing themselves as they were for the first time.”