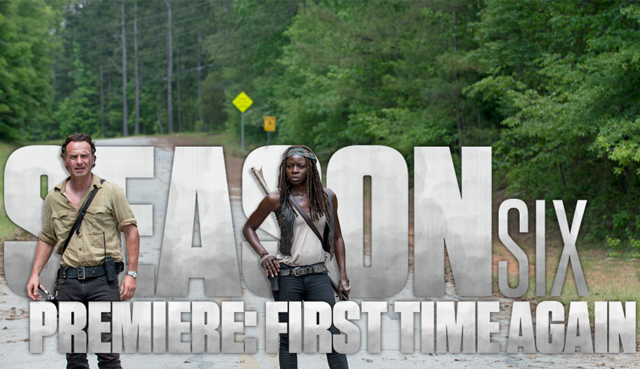 Do not adjust your televisions; this episode is broken up into a black and white past and a vibrant colored present. To simplify the story, we’ve broken this recap into the two time periods. Enjoy.

Deanna tells Father Gabriel he was wrong as a drunken Abraham takes Pete in a body bag out back. Glenn, Maggie, and Eugene make it back to the infirmary to check on Tara, who’s fine. Morgan tells Rick, “You were right. It wasn’t over.” Rick tells him he doesn’t take chances anymore. Rick stresses to Daryl they need more watch points and need to stop recruiting people.

Rick walks in on Morgan practicing his stick-fighting skills, which he explains he learned from a friend after the apocalypse. Eugene meets Dr. Dre-ahem Heath, a runner from Alexandria, along with Scott, and Annie at the gate. After Heath threatens to beat him for not letting him in, Eugene lets him in! (Eugene is terrible at being a watchman, even as a sub). Also, Eugene hilariously respects Heath’s “hair game.” Rick confronts Father Gabriel about burying Pete. “We’re not going to bury killers inside these walls,” he affirms. Deanna takes Rick’s side and instructs them to go west to bury him. Morgan reminds Rick they’re both killers, but Rick ignores the irony.

Jessie’s older son Ron follows Rick and Morgan to the burial site. When Rick proposes they just leave the body in the woods, Morgan says “that’s not who you are.” Rick protests Morgan doesn’t know him anymore. Suddenly, they discover a hoard of zombies stuck in a canyon. Being chased by walkers, Ron runs right towards them just in time for Rick and Morgan to save him. Ron claims he followed to find out where his dad was buried. “This is how the community’s still here,’ Rick says. These walkers have been stuck in the canyon for a while and it’s the reason Alexandria hasn’t yet been overrun. 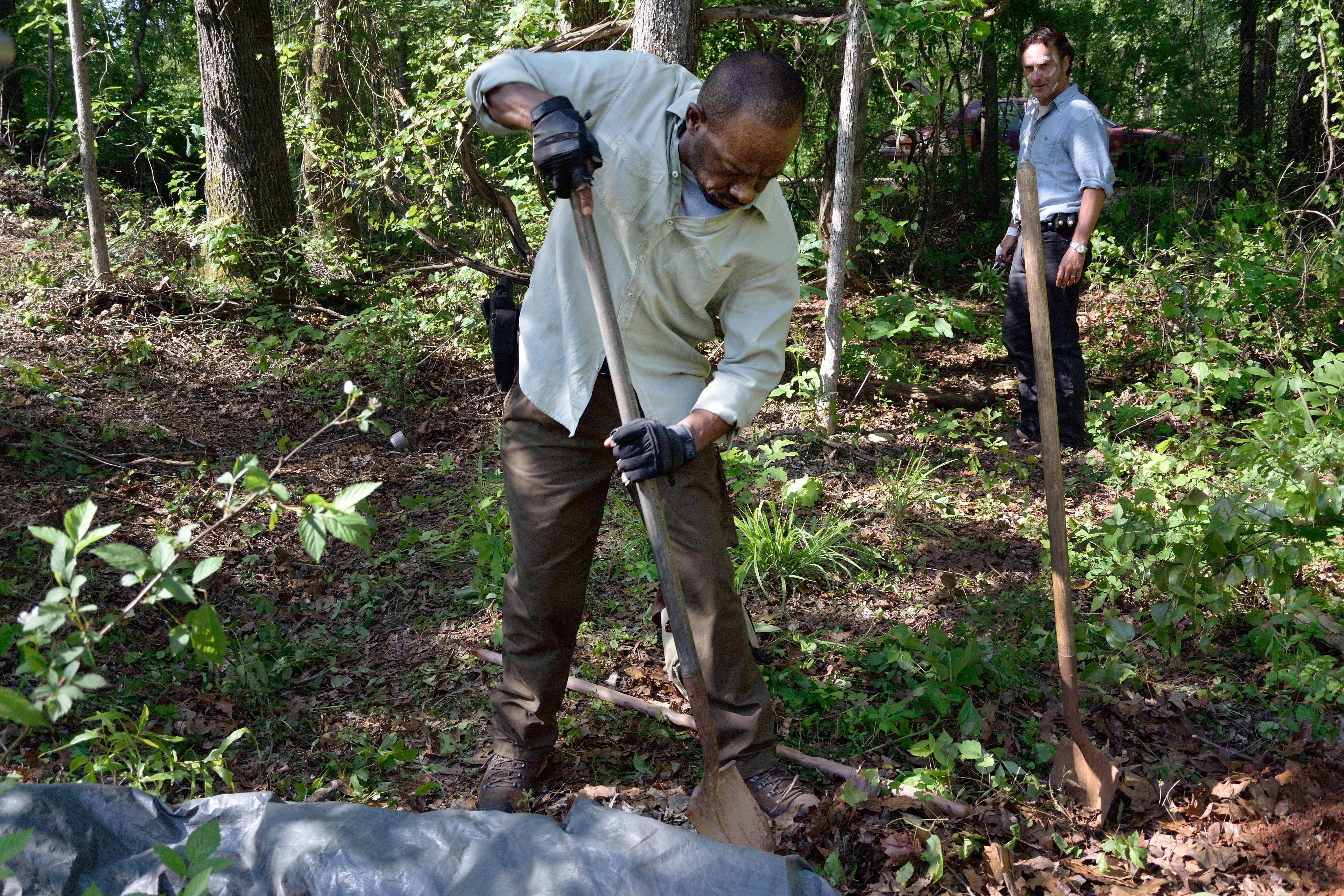 The Alexandria residents gather in a living room to discuss the canyon of walkers and the inevitability of them breaking through the semi-truck’s and making their way to Alexandria. Rick proposes they create a distraction to lead away the walkers from Alexandria. Carter proposes they build up the exits but for the second time this episode Deanna defends Rick’s decision. Father Gabriel offers to help with the plan but Rick shuts.him.DOWN in a stand up and applaud moment. Carter voices his skepticism towards the plan AND Rick by mentioning the Pete drama, but the community rallies around Rick (including Nicholas, to Glenn’s dismay). Carter reluctantly gets on board.

Maggie catches Tara up on Nicholas getting Noah killed and trying to kill Glenn. Morgan meets Carol for the first time and can tell she’s more of an authority figure than a mom with cookies. Rick emphasizes the importance of the Alexandrians being able to defend themselves to Deanna. Almost on cue, walkers appear out of nowhere and Rick uses it as a test. The test fails, Carter yells for help, and Michonne, Daryl, and eventually Rick come to the rescue. 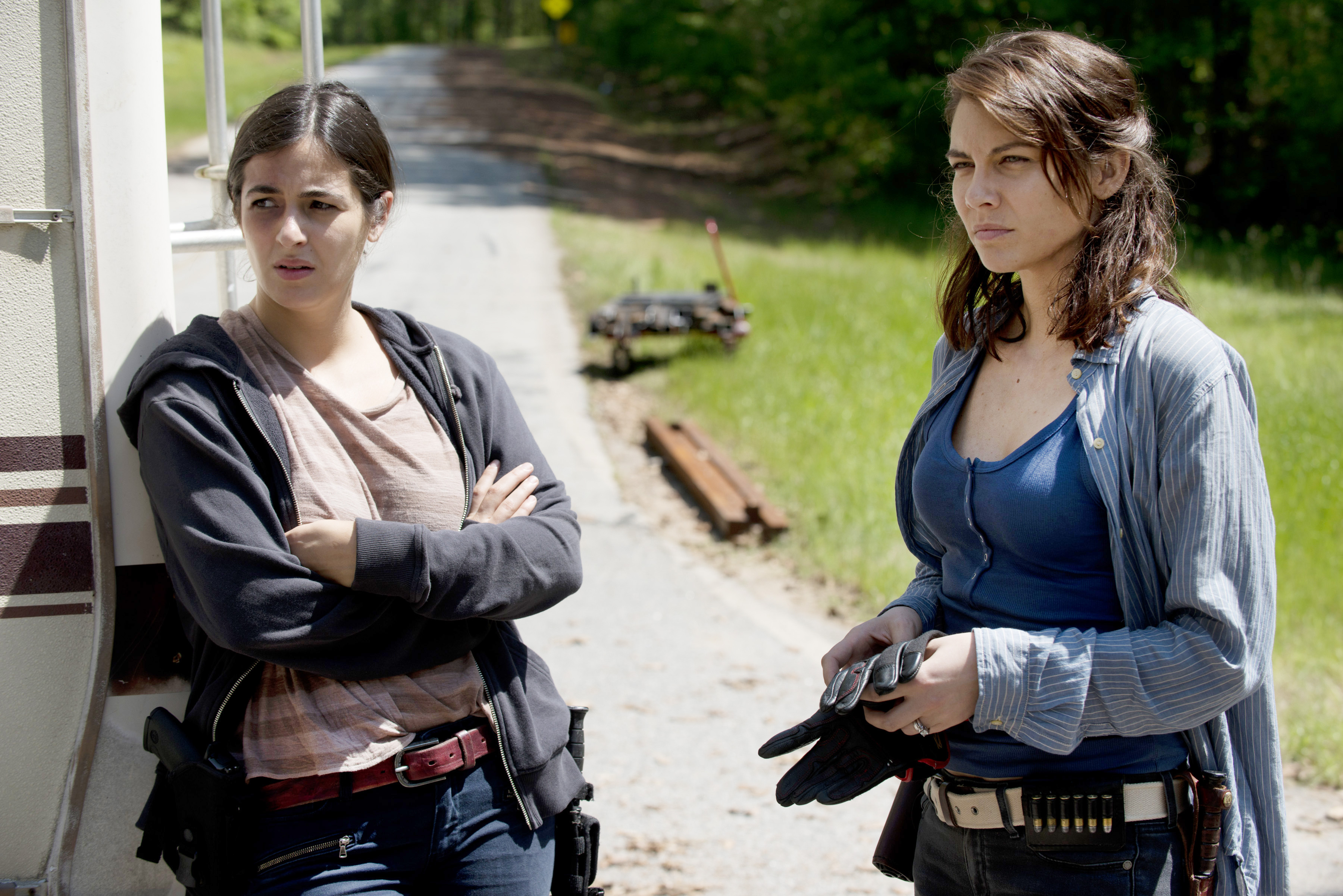 Later, while gathering supplies, Eugene accidentally overhears Carter other Alexandrians his plan to kill Rick before he takes over the town. Also accidentally, Eugene drops a jar and reveals his position. Carter walks over and points a gun at a fetal-positioned Eugene, and nearly pulls the trigger when Rick, Morgan, and Daryl walk in. “What the hell’s going on?” Rick asks (oh Jesus). Rick jokes they should have set up lookouts and then takes Carter’s gun and points it at him. “Do you have ANY idea who you’re talking to?” Rick demands. Although the audience at this point is begging Rick to pull the trigger, he declines and lets him live so long as he plays nice. 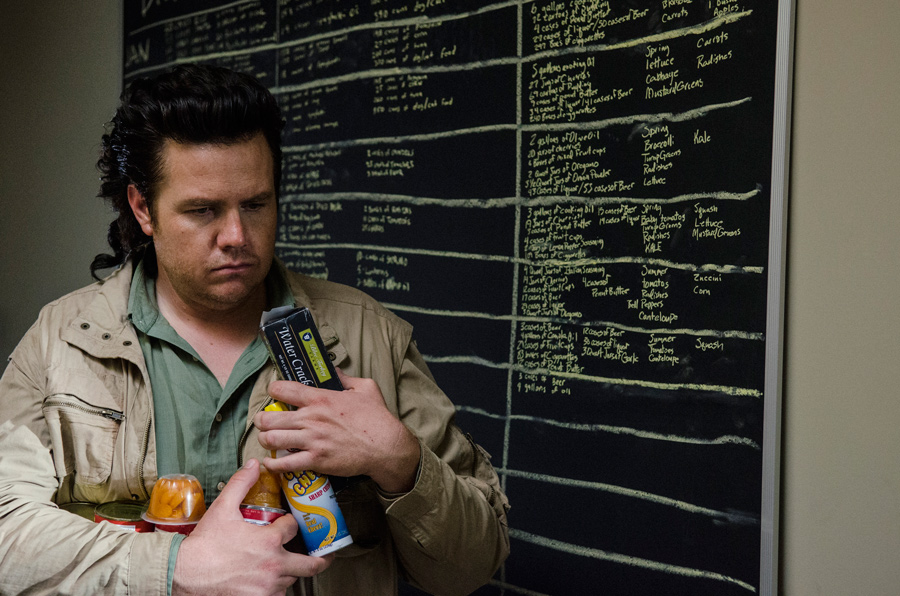 Morgan meets Judith for the first time as Rick laments to him that the Alexandrians might be a lost cause. He also explains not killing Carter because he didn’t have to but “he’s going to die no matter what.” Later, Jessie reveals she knows what happened with Ron in the forest and (considering Rick killed his father) demands Rick not to dictate what Ron does or doesn’t do.

Rick and the gang are in the canyon for the beginning of the plan. The semi truck in the distance prematurely falls, allowing the walkers to make their way towards Alexandria. Thankfully, Rick anticipated this and their plan will have to start early. “We’re doing this NOW,” Rick yells. 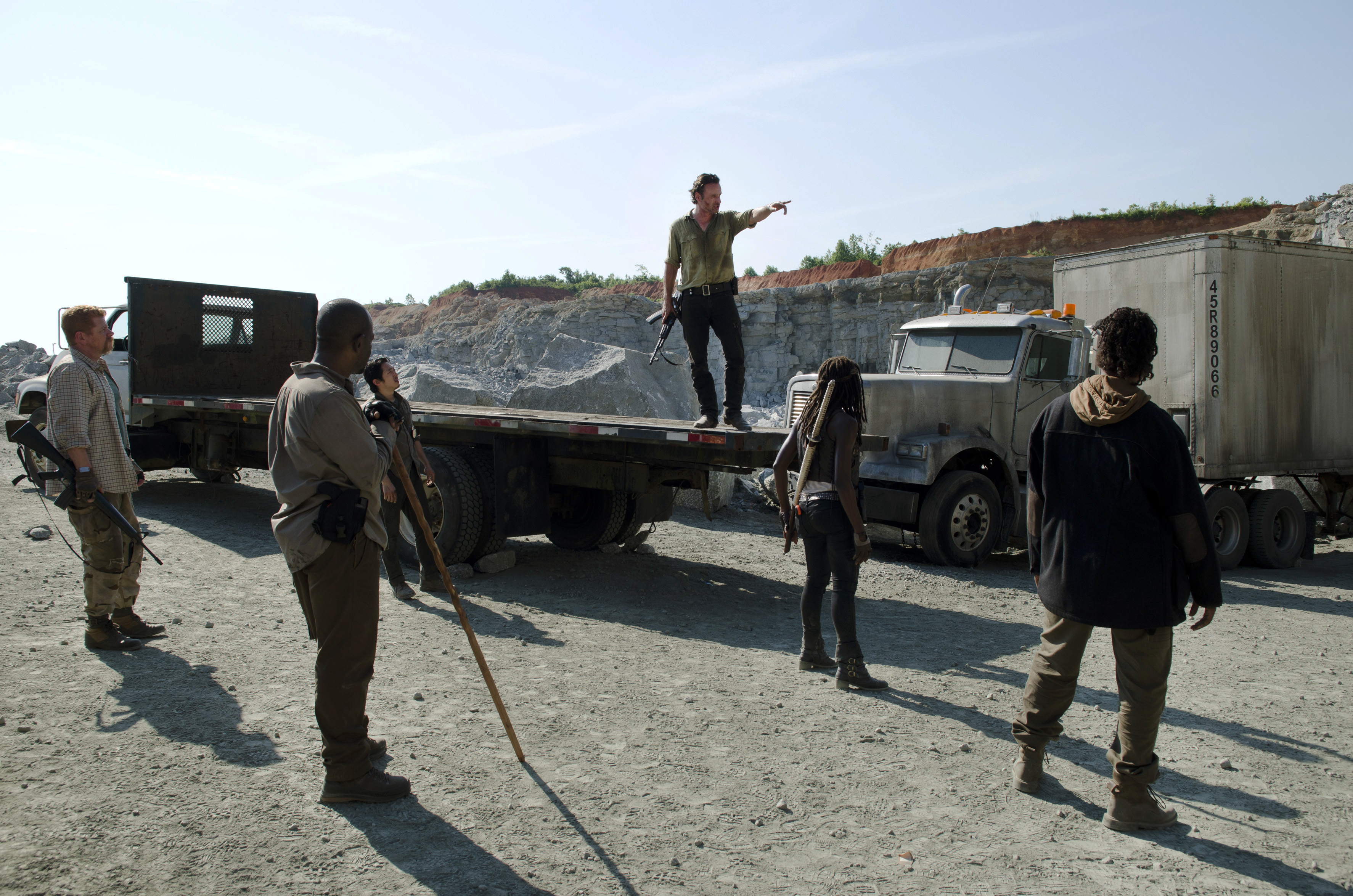 Daryl slowly leads a hoard of zombies down the road on his motorcycle. Glenn, Heath, and Nicholas reach a convenient store full of walkers. Glenn proposes they take them on head on so the hoard on the street doesn’t get distracted by the noise of the store walkers. Anti-climactically, the door they want to use is closed. Glenn decides to do this the hard (and only) way: shoot through. He shoots the window and he, Nicholas, and Heath one-by-one take out the walkers as they come through. Nicholas kills the last one after saving Glenn, and it appears tensions between the two have tempered. 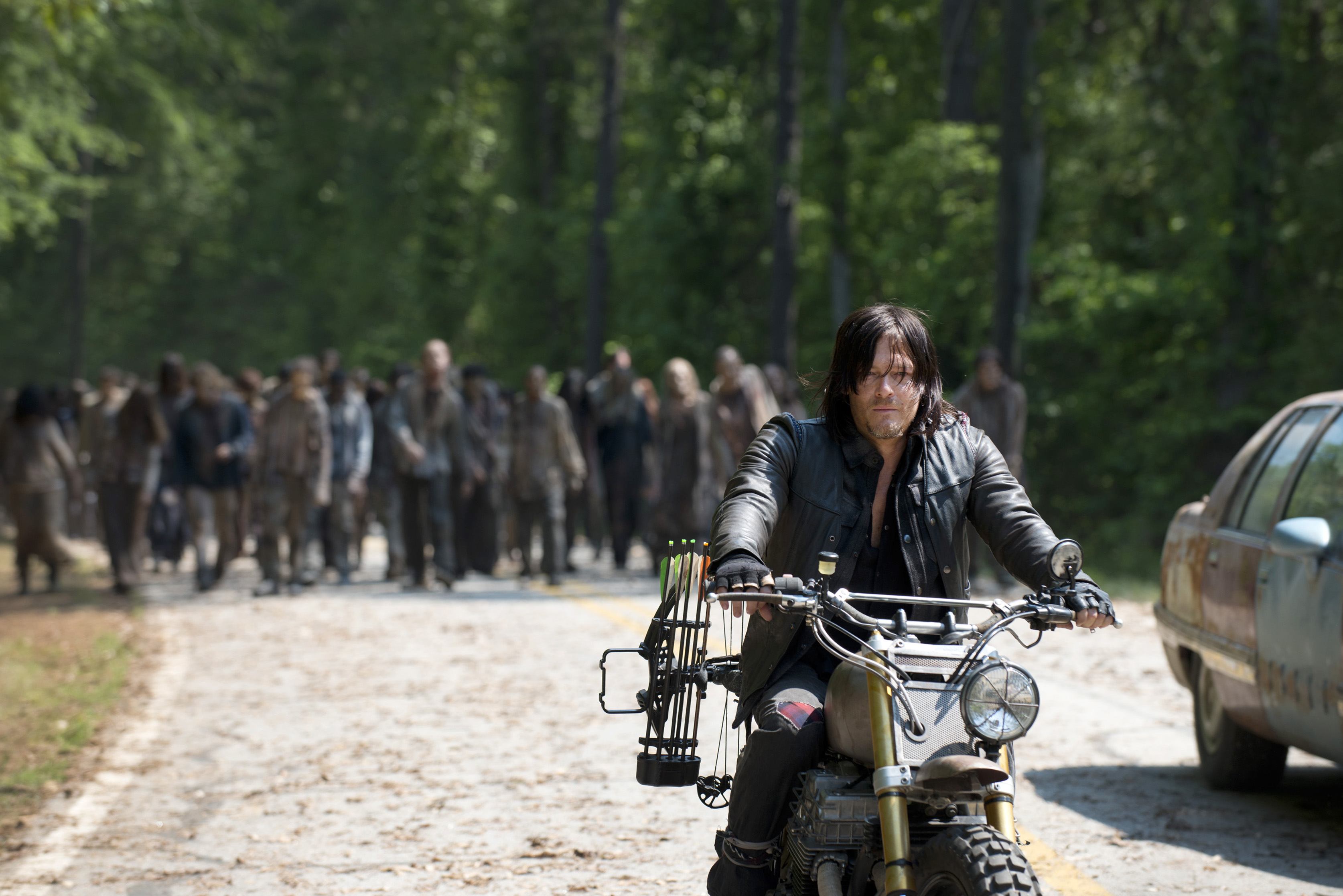 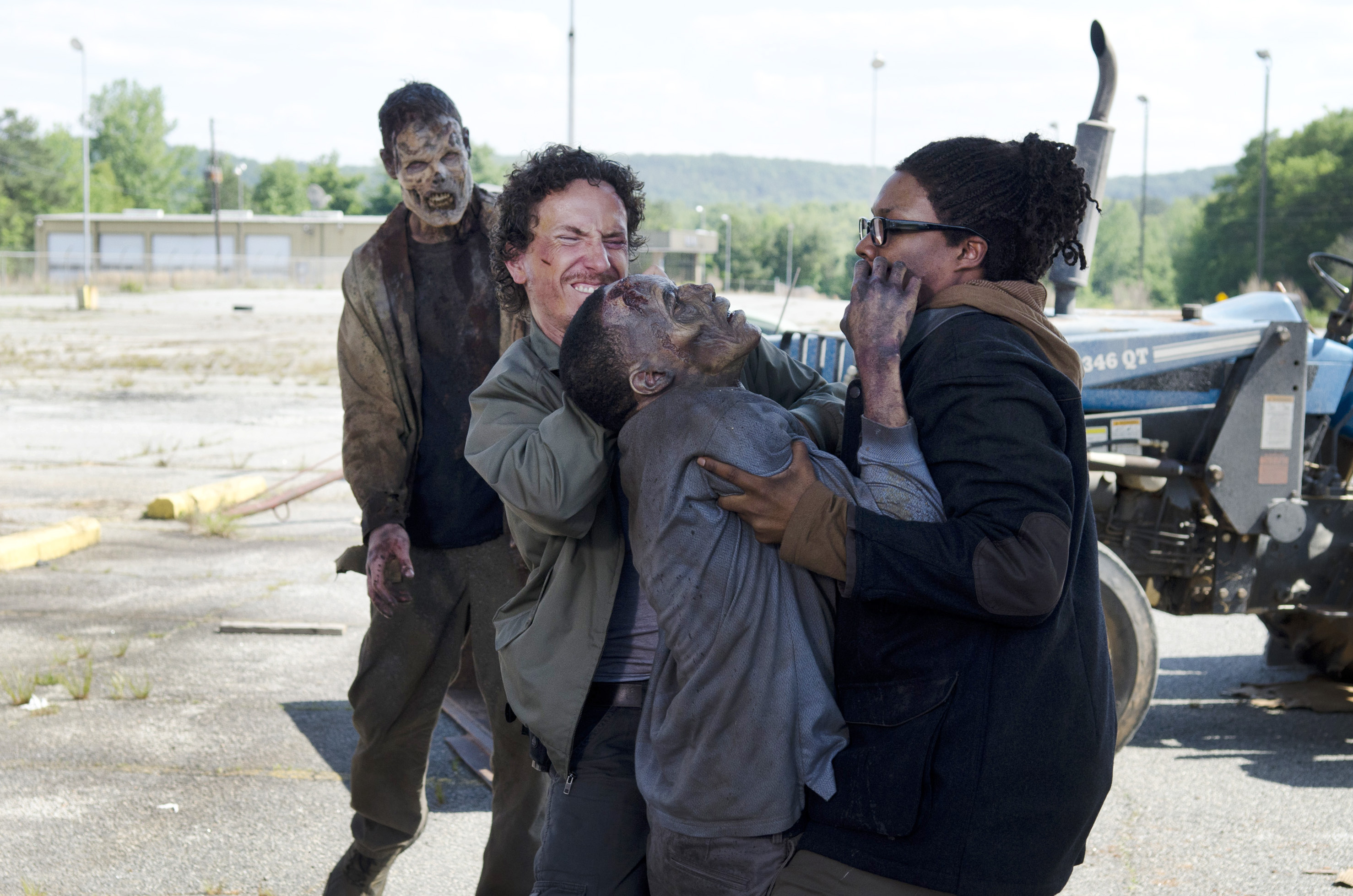 ”
Rick shoots flares to distract the walkers. They let the walkers out of the store and take most of them out pretty quickly. Despite their recent history, Nicholas and Glenn work together to take out the walkers. Back on the road, Abraham quickly jumps out of the car to kill some walkers. Sasha questions his motives to “grab the bull by the nutsack.” Some of the walkers hit their heads and kill themselves on the wall the Alexandrians built as they walk by.

Rick, Carter, and some Alexandrians hide in the woods as the walkers pass by on the road. “It’s working, you were right,” Carter admits to Rick. They split up and suddenly Carter gets attacked and bitten by a walker attached to a tree. Carter’s screams naturally divert the walkers from the road. Rick runs over and (not wanting to divert more walkers) stabs Carter in the head to shut him up. The walkers get back on track. Suddenly, a loud horn sounds from the distance. The gang can’t make heads or tails of the source, but it’s diverting walkers into the woods and away from the road. The episode closes as thousands of walkers head to Alexandria.

What the hell was that horn?

Is there EVER one more peanut butter bar?

Should Rick have killed Carter earlier when he had the chance?