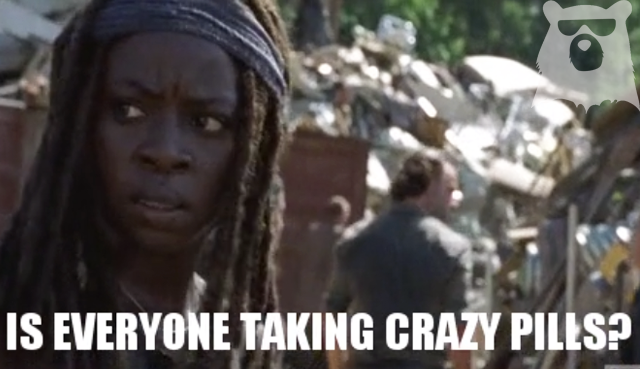 GLADIATORIAL SPIKE ZOMBIE!! Just one of many awesome gif-able things about this week’s new The Walking Dead episode. As usual, we’ve compiled some of our favorite moments from the new episode into a handy dandy gif post. REMEMBER: If you wanna join in on the fun and create your own gifs for each new TWD episode (and lots of other tv shows) sign up for the Cooler beta today! We may even include some of your gifs in future posts!

My sister had that dress.

Hey there! We’re the mullet faction

Is Rick gonna fight a rancor?

He definitely needs a tetanus shot by now.

Alternatively: When someone says something dumb in the group text

Babe, I got you a cat

Now that you hate us for getting that song stuck in your head again, let us know what YOU thought in the comments! Also don’t forget to sign up for the Cooler TV app beta TODAY!