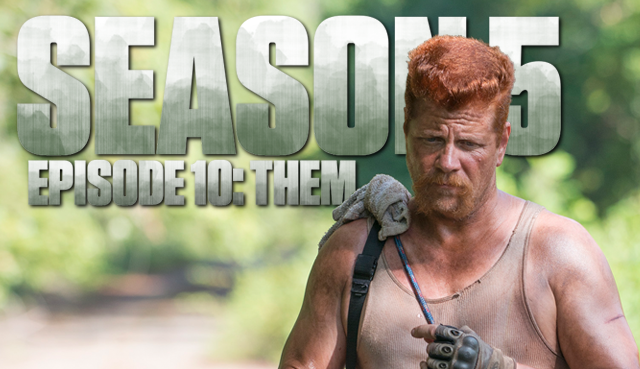 Season 5 Episode 10: Them – Recap and Discussion

We open with Maggie, sitting against a tree, looking pretty lost and haggard. Crying. A zombie approaches, she takes care of it, and sits back down, resuming her crying. Then Daryl eats an earth worm and I’m 90% sure it’s real. I feel like Reedus would be down for that (although the camera does pan away for a second). Sasha stalks a muddy stream littered with dead frogs looking for water. The three of them meet up and head back to the road. In short: things are BLEAK.

The group is 60 miles from DC and they are out of water and food. Tough times ahead.

Back from the credits and the group runs out of gas. Man these guys have no luck. A herd follows them but Rick says they’ll wait until they have a better position. He’s not worried about it; they’re clearly acclimating to walkers. Rick tries to talk to Daryl about the Grady incident but Daryl changes the subject and then goes scouting with Carol (who invites herself).

Carl gives Maggie a music box. Slow down, Carl! Glenn’s not walking that far away! Gabriel is the next one to try to comfort Maggie. She flips it on him and chastises him for hiding from his flock. Harsh.

The sun beats down on our group, shambling not far ahead of the walkers. They’re not doing well.

Sasha wants to take out the walkers. Michonne cautions her against anger, and compares her situation to Tyreese’s. “We are NOT the same,” Sasha says.

Carol and Daryl are finding nothing. Carol says that Beth saved her life, and that she saved Daryl’s too. She gives him Beth’s knife and tells him to let himself feel it. Then she kisses him on the forehead and leaves. It’s like group therapy in this episode.

The group decides to make their stand near a bridge, where they can draw them in and then shove them off the side with minimal work. It’s going well until Sasha breaks ranks to kill one up close. “Plan just got dicked,” says Abraham. Classic Abe.

Sasha cuts Abraham’s arm in a frenzy. Michonne finally shoves her to the ground and kills the last one. “I TOLD YOU TO STOP.” Sasha just gives the biggest stink eye and walks off.

Shambling down the road the group finds a cluster of cars. Daryl circles around the pile up through the woods in case of trouble while the group investigates. Maggie pops the trunk on one and finds a walker that had died bound and gagged. It’s the saddest looking walker since Bicycle Girl.

She closes the trunk and looks like she’s gonna cry-hurl as it bangs around. She goes back to take care of it but the key’s stuck so she pulls her gun. Glenn stops her before she shoots the trunk up. Maggie’s barely holding on. Glenn opens the trunk and knifes the walker.

In the woods, Daryl finds a desiccated deer and slumps to his knees. There’s a dead walker sitting against a tree as well. Man even the dead animals and zombies are depressed.

“I truly do not know if things can get worse,” says Eugene, right before a pack of wild, ravenous dogs come out of the forest. The group crouches for action and then—zing zing zing—Sasha takes them all out with her silenced assault rifle.

They cook the dogs. Meat’s back on the menu, boys!*

Noah looks at Sasha and tells her that he doesn’t think he can make it. “Then you won’t,” Sasha replies.

The group eats quietly. Gabriel throws his clerical collar on the fire. This is easily the most dour, bleak episode of the series.

Maggie finally opens up to Glenn a bit and admits that she could never really hope that Beth was alive until Daryl came back from Grady. “We fought to be here, and we have to keep fighting,” says Glenn. And Maggie drinks. I like that accepting water on this show means that you’re starting to have hope again.

Glenn tries to give some hope—I mean water—to Daryl but he refuses. More Glenn wisdom: “We can make it together, but we can ONLY make it together.” Daryl splits off to look for more water.

Daryl spots a barn and he sits down to have a smoke while he stares at it. He puts the cigarette out on his hand. Finally he starts to cry and it’s like the most difficult choked out cry you ever heard.

He heads back to the road. The group is standing around some mysterious bottles of water in the middle of the road. Rick hands Daryl a note that says “FROM A FRIEND.” Daryl drops it and pulls his crossbow. Eugene says that if its a trap they’re already in it and he chooses to believe that it’s safe. He goes to drink one and Abraham slaps it out of his hand. There’s still a bit of Abraham left in there!

Just then it starts to rain. Finally. Finally some happiness. They put out bowls and bottles but then it REALLY starts to rain and the sky looks dangerous (be careful what you wish for?). Daryl tells them about the barn and they head for it.

Maggie finds a bible and a derelict walker. She knifes it without issue.

Carl sleeps holding Judith and Rick says that kids growing up in this world have it easy, because this is just “the world” for them. Kids get used to things. Michonne argues that this isn’t the real world. Rick cautions that they need to accept it as it is. “That’s the trick of it I think: we do what we need to do and THEN we get to live. No matter what we find in DC I know we’ll be OK because this is how we survive. We tell ourselves that WE are the walking dead.” (!!!)

As the storm worsens, a herd approaches. Daryl throws himself against the rotting doors. Maggie jumps up to help him. Sasha stares for a beat and then gets up also. Then everyone else does the same. The herd’s big, everyone’s feet push back in the mud as the lightning crashes and the wind roars but they manage to hold it.

In the early morning Maggie wakes up and finds Daryl sitting there, watching the door. She tells him to get some sleep. He looks over at Sasha and says of Tyreese: “He was tough.” Then he about Beth: “So was she. She didn’t know it, but she was.”

He hands Maggie the music box. He cleaned the dirt out of the gears for her. Maggie wakes Sasha up and invites her outside the barn. Some trees blew over and pinned walkers all over the place.

Sasha and Maggie sit and watch the sun rise. “Why are we here?” asks Sasha. “For this,” Maggie answers watching the sun rise. She opens the music box and winds it up. It starts and then promptly stops. They both laugh.

Just then a man comes out from the trees. “Hey! Hi!” The girls pull their guns. “I didn’t mean to interrupt. Good morning, my name is Aaron. I know, stranger danger, but I’m a friend. I’d like to talk to the person in charge. Rick, right? I have good news.” Then the music box starts playing again and the episode ends.

It’s Aaron!
Are Maggie and Sasha healing? What about Daryl? What about Abe?
Is this the most hopeful episode or the most depressing? I CAN’T TELL!
And hey, WE ARE THE WALKING DEAD!!!

Give us your take on the episode. What did you think? Where are we going? What symbolism did you notice? We’ll take the comment we like the most and will shower praise and gifts on that commenter (or at least some TWD swag). So plop ’em if you got ’em.

*I like to throw in a little LOTR to keep Lizzy happy when I force her to proof read these.

DON’T MISS THE COMIC TO SHOW COMPARISON FOR THIS EPISODE: 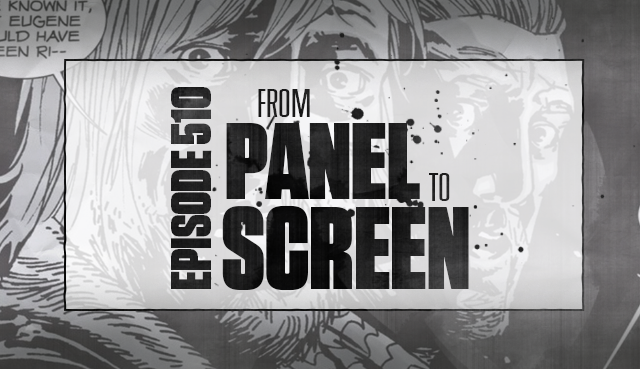 Home | The Walking Dead | Season 5 Episode 10: Them – Recap and Discussion