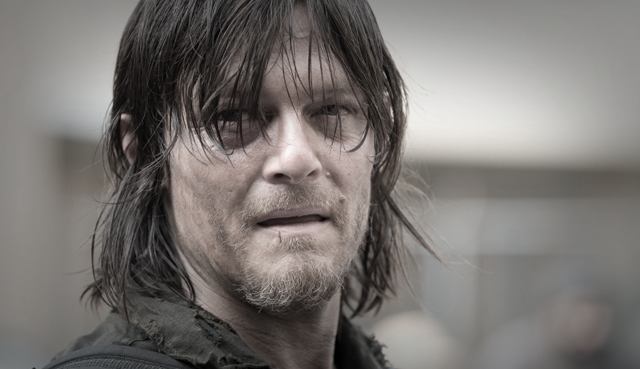 Norman Reedus answered a bunch of questions on AMC’s blog about Daryl arriving at Alexandria, how his character has developed, and, most importantly, he shares his cocktail recipe inspired by the apocalypse. Read on:

Q: Once the survivors get to Alexandria, Daryl really feels like the odd man out in a civilized society. Have you ever felt so out of place before? Do you think Daryl could ever be “domesticated”?

A: He’s definitely the outsider. I felt that way pretty much all of high school. [Laughs] All those years are awkward. I really like that line [in Episode 415] when Joe says there’s nothing sadder than an outdoor cat pretending he’s an indoor cat. It’s very appropriate.

Q: What’s your favorite way to wind down after a heavy episode? Does it ever take you a while to “come down” off your character?

A: I always have my motorcycle on set, so I’ll ride through the woods, back home and just feel the breeze on my face, look at the trees, look at the sun going down or coming up. It’s a great way to wind down, but also a great way to get ready. I do some of my best thinking on there.

Q: You’ve mentioned that Daryl would be an a–hole if the zombie apocalypse hadn’t happened. What makes you think that?

A: Well, his brother was kind of an a–hole and I think he was slowly turning into his brother. Merle even says that they had met up at that camp [where Rick was] to initially rob everyone before it all went south. I imagine Daryl would still be doing things like that, being up to no good. In Episode 412, “Still,” Daryl talks about running with his brother before the apocalypse.

Q: In Episode 506, Carol says Daryl used to be a kid, but is now a man. Do you think the apocalypse was a rite of passage for him?

A: I think, in a lot of ways, he would have never had this opportunity to become a different person. He’s never had people rely on him before.

Q: Daryl introduces Beth to moonshine last Season. What’s your drink of choice? Do you think you could concoct a cocktail inspired by the zombie apocalypse?

A: [Laughs] Wow, what an original question. That’s a first! I have quite a bit of moonshine in my house in Georgia. Working down in the South, sometimes you get slipped some here and there. They’re so sweet that I can’t do anything but sip them once every month. An end-of-the-world moonshine? Jeez. Maybe for Norman, it’d taste like coffee which would completely be disgusting, but Daryl’s would taste like, I don’t know, Jim Beam and bacon?

Q: Jim Beam and Bacon. I need that on a T-shirt!

A: Yeah, a little comfort and a little bacon.

Read the rest of the Q&A here on AMC’s blog!

And don’t forget to watch Norman Reedus on SNL!