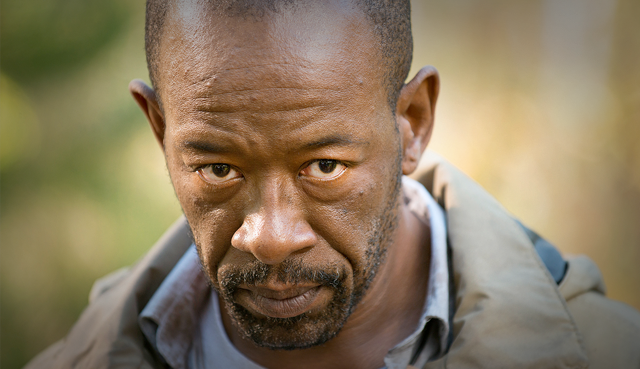 Entertainment Weekly chatted with Lennie James (Morgan) and discussed Morgan’s past, his new zen attitude, and his shock upon seeing the Ricktator in action at the end of Episode 516. Read on:

EW: So, now that you have done your requisite one big episode for every two years, does that mean Morgan is now going to go out for a walk and disappear until season 7?

LENNIE JAMES: [Laughs] In all honesty, I don’t exactly know. I know I’ll be back around for at least one episode of season 6 and beyond that, as always, I am at the mercy of the show.

As you all are. But clearly we are meeting a different Morgan here. He’s gone from the brink of insanity—or maybe a few steps over the brink—to a seemingly very Zen place. What can you tell us about Morgan 2.0?

I can tell you that much like the transformation from the first pilot episode to “Clear” where there was an incident in the sense that Morgan lost his wife and his son—and we saw the affect that had on him in “Clear”—an incident has happened to Morgan again. He has come across someone who has kind of led him and redirected him to another path. And what we’ve met in the finale of season 5 and we may well witness is season 6 is the result of that incident. I hope that makes sense. I am desperately trying not to say things that A) I don’t know about it, and B) What little I do know, I’m not allowed to say.

Let’s talk about that in terms of how much do you know about Morgan’s actual backstory that got him to this place. What did showrunner Scott Gimple tell you in terms of what Morgan’s been doing and what’s happened to him?

He told me as much as I asked for and I wanted, and as much as I felt that I needed. So he explained in very broad strokes—because at the moment they’re still part of the mythology of the next season—so what he told me was that Morgan meets a particular person who had an affect on him and he explained to me in very broad terms the specifics of that meeting.

And you’ve mentioned how that might be something we get to in season 6. That could just be him telling Rick about it, but this show has been known to play with time a bit to show events from the past. Do you think that’s something we might get to actually see in season 6, kind of like what they did with the Governor in season 4 when they spent two episodes filling in the blanks on that character’s journey?

To be honest, I don’t know. I hope the audience gets to see it, but again I’m at the mercy of the storyteller. I think whichever way it comes out is whichever way it’s best for the show really. But I hope you get to see it because I do like that the show has the ability to do that and that it’s brave enough to take its time and trust the audience and believe in its mythology—and the fact that the fans are smart enough and committed enough to go with it.

What do you think Morgan is thinking there when he finally gets to Rick, and the first thing he sees is him executing someone?

I think that it’s shock. This is not where he expected to find Rick. This is not who he expected to find. He just walked in on the scene so he’s obviously going to be asking for an explanation. But I think at this particular moment in time the initial reaction is that it’s almost as if the tables have been completely turned and done a complete 180. I’m standing where Rick was in “Clear” and Rick is standing where I was in “Clear.” I mean, he’s gone to the cray cray side. Quite obviously that is not the entire situation, but certainly on first viewing and first impressions you can understand why Morgan might make that mistake.

And then go check out some Season 5B memes!

Out This Week: Tech Jacket #9

The Walking Dead Cartoon is Go!