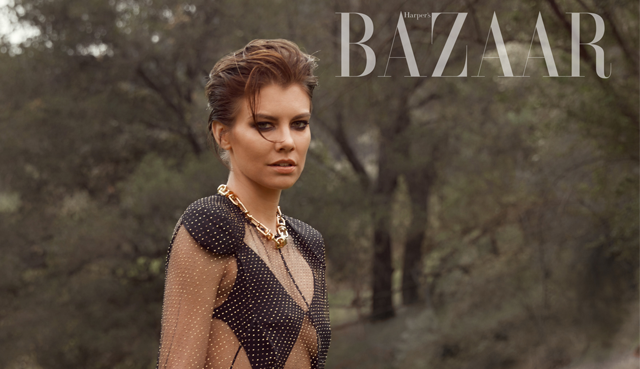 In a recent interview with Harper’s Bazaar, Lauren Cohan discussed the strong women of The Walking Dead, saying farewell to cast mates, and the “heartbreaking” Season 7 finale.

On if she sees the women of The Walking Dead as feminist characters: “I do consider our female characters—and most of our men—to be feminist,” says Cohan. “The qualifications to survive the apocalypse, physically and emotionally, are demanding and naturally equalizing: knowing poisonous berries from nonpoisonous berries, being able to jump start a car, keeping your cool under pressure, having the Spidey-sense to stab a zombie in the brain just in time.”

“Our characters are defined by their merits, not their gender. It makes me proud when mothers tell us that their daughters look up to the women on our show.”

Cohan also discussed “death dinners” – the cast’s traditional send-off to their fallen: “It’s funny when I stop to think about calling them death dinners. It’s such a frequent part of our lingo that I forget how absurd it is, like spying on your own funeral. We’ve had some of our best nights together at them. There’s always a lot of tears, but we also have bonfires and play games and get to tell the family member leaving how much we love them—and, you know, completely embarrass them.”

And when it comes to the finale: “You’re certainly in for a lot of emotion. [It’s] incredibly bittersweet, beautiful, and heartbreaking.”

The Walking Dead Magazine #20: An Inside Look