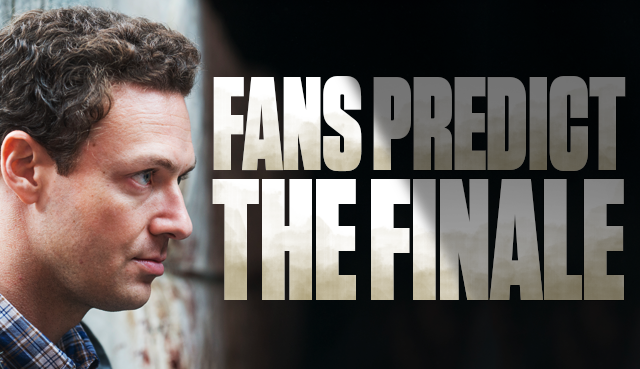 In a blatant attempt to get you guys to do our work for us, I recently asked you for your finale predictions on Twitter and Facebook.

Help us write a post! What ONE prediction do you have for the finale?

We got over 600 responses on Facebook and good number on Twitter! Since many of you are comic-savvy (high five!) you know a little more so we’ll veer away from specifics. That being said, let’s take a look at the most common:

WOLVES AT THE GATES

I think this one generated the most discussion. You guys seem pretty convinced that whoever/whatever the Wolves (or whoever is responsible for those carved Ws and/or Ms) will be showing up in force. Comic readers think they’ve found the comic corollary for them (actually there’s TWO competing theories but I think one of them is ridiculous) but I’ll also point out how much Robert likes to mix up the show to keep you guys guessing. Also, pretty sure the Wolves and W thing have to be related, right? For a while I kind was on the “M” train to be honest (That upside-down close up? Monroe? The chained up walker?) but by around episode 14 was pretty sure that was not it. We’ll see though!

THE RETURN OF MORGAN

Solid prediction. He was teased in that premiere end-cap, so he has to show up at SOME point. How far behind was he, though? At least weeks, if not months. We’ll see. Love that Lennie James. Hopefully he’s not been too busy carving Ms into everything…

Pete’s a problem for sure. FOR SURE, guys. But he’s also a pretty interesting moral quandary. There is no other surgeon. Rick has the hots for his wife. He’s SUPER volatile. He’s a good ingredient to keep in the mix.

GASP! When Entertainment Tonight asked Norman Reedus about the finale, what did he say? “Wow, bring your Kleenex and you’ll be screaming at your television.” Also, where does Daryl go from here as a character? He’s gone from Lone Wolf bad boy to the loyal sidekick and member of the family. Merle is dead. Beth is dead. He has the most dangerous job in Alexandria.

To be fair, this one seems to be more of a fan wish than a prediction. You guys HATE Gabriel. Will he be killed off though? As a character, he’s not serving the plot too much now that he turned on Rick and his crew so maybe.

Oh sure, let’s get vague. I mean, this IS The Walking Dead. Let’s look at past season finale deaths:
Season 1: Dr. Jenner and Jacqui.
Season 2: Jimmy (Beth’s ex) and Patricia (Otis’ wife).
Season 3 (that we see): Andrea, Milton, Allen, and Woodyburyites Jody, Paul, and Eric (what a blood bath).
Season 4: All of Daryl’s temporary “Claimers” group (Joe, Tony, Harley, Billy, and Dan) and Gareth’s brother Alex. So all bad guys! And one rando no-name.

So honestly, only one finale (season 3) has a major protagonist death. I’d like to say that means the odds are good we WON’T have a major death, but honestly I’m really thinking that we’re due. Sorry. In any event, SOMEONE will die, right? This is The Walking Dead.

Could Rick’s group rise up and take over Alexandria? Yes. Easily. Those people are whimps. But who would Michonne stand with? Who would Daryl stand with? Would anyone from Alexandria join Rick’s Group? Or will a truce be worked out after Rick’s insane outburst? He wasn’t exactly wrong to try and stop Pete…

THE SHOW WILL BE 90 MINUTES

@TheWalkingDead It will be 90 minutes long. What do I win?

Dalton thought he was being cute with a sure thing but the joke’s on him because the show should end up around 65 minutes without commercials. With commercials: 91 minutes (AMC schedule shows it as 9-10:31)! You guys get a whole extra minute. Probably of commercials.

Speaking of, every episode we get tweet after tweet complaining about all the commercials. Every episode of TWD is just about 44 minutes, maybe a bit less. This is the same as every other hour-long.: 22 minutes of show per 30 minutes of programming. So when you think the show is 50% commercials on Sunday, try and remember that there are an average number of commercials (ok fine, with one extra minute).

I think we’ll hear casting news for a character this big before he arrives BUT did you know the first appearance of Michonne at the end of Season 2, that wasn’t Danai since she hadn’t been cast when they filmed that scene? Hmmmm….

That’s that! You guys had A TON of predictions but I think those were the ones we saw the most. What else you got? Plop ’em in the comments below and if you drop set spoilers or any inside information so help me God I will strike down upon thee with a great vengeance and FURIOUS anger! And let’s leave comic talk in the other posts.

And hey, set those DVRs to record a couple extra minutes just to be sure…