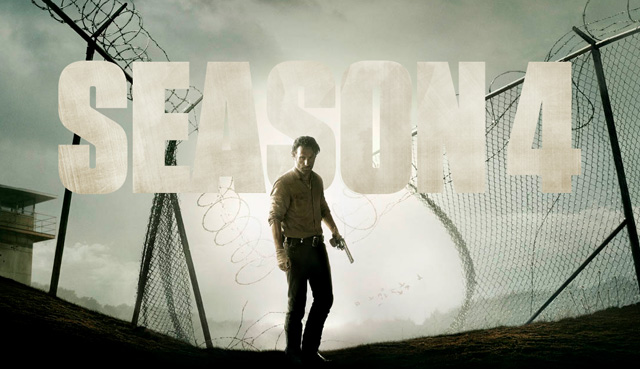 Episode 401: 30 Days Without an Accident-Recap

Hey gang, we are deep into NYCC this weekend so we’re going to get right to a quick recap and then jump to discussion.

It’s been a loooong wait since Season 3 wrapped up with the Governor turning on his remaining people and their exodus to the Prison. We pick up after a decent amount of time has passed. The prison has a garden, livestock, and an alarming number of walkers at the fences. Rick has given up the gun and taken up farming. Everyone has a job to do: some are on walker detail at the fences, some go on supply runs, some teach, etc.

Tyreese, who has a romance blossoming with Karen, was on fence detail but has decided to switch to supply runs. He heads off with Daryl, Michonne, Glenn, and some new faces: Army Medic Bob Stookey (The Wire’s Lawrence Gilliard Jr.) and Zach (Veronica Mars’ Kyle Gallner), who appears to be Beth’s boyfriend.

On the supply run, the group heads to a large grocery store. Unbeknownst to them, there is a crashed helicopter on the roof complete with a horde of walkers. The soggy roof is threatening to cave in at any minute.

Inside the store, Bob Stookey is contemplating a bottle of booze, obviously something he’s dealt with in the past. As he slams the bottle back on the shelf, it crashes down on top of him, trapping him. Attracted to the noise, the walkers converge on that part of the roof. The increased weight causes the roof to give. With the structural integrity gone, walkers start crashing down through the roof all over the store.

The group struggles to free Bob, eventually succeeding but Zach is pulled down by a zombie where it’s able to take a large chunk out of his neck. The group returns to Woodbury. Daryl delivers the bad news to Beth, who seems immune to the loss of loved ones after all they’ve been through.

While this is going on, Rick heads into the woods to check the traps for game before the walkers can get to it. While out he comes across a strange women, who begs him to help her and her husband, who is back at camp. Rick tells her that they can come back with him if he thinks they are ok people and they can answer three questions.

Once back at her camp, the woman pulls a knife and charges Rick. Her attempt is unsuccessful. Distressed and possibly ashamed, she stabs herself. As she lays dying the woman admits to Rick that she thought it would be easier to trick him into coming back with her to feed her walker husband than to try and drag the hog back. She begs Rick to leave her be when she turns into a walker and asks him what his three questions are. Rick stays with her while she passes and asks her the three questions:

While Rick is in the woods dealing with the stranger, Carol is having story time with the younger children in the Prison. Carl’s friend Patrick (played by Vincent Martella of Phineas and Ferb fame) gets nauseous and asks to leave to use the bathroom. Story time continues but once the other adult leaves the room, Carol brings out a chest of knives and begins to teach the children how to defend themselves. Carl comes in and sees this. Carol asks him not to tell his father.

That night at the Prison Patrick is extremely ill. Without telling anyone he stumbles to the bathroom, throws up, and then falls to the ground. The final shot of the show is Patrick coming back from the dead as a walker.

So what did you think?!

Was it worth the wait?
What’s up with Patrick’s illness (speculation here)?
Where’s the Governor?
Is Michonne on a fool’s quest trying to find him?
How did we feel about farmer Rick?
Are his 3 questions sufficient?
What DID Daryl used to do?

We want to hear what you have to say! We’ll give a shirt and any Walking Dead softcover volume to the best comment below!

Home | The Walking Dead | Episode 401: 30 Days Without an Accident-Recap