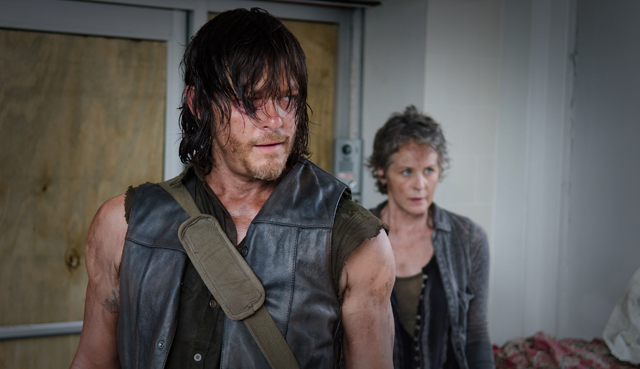 Daryl Will Do Anything to Save Beth and Carol

Thems be fighting words! Norman Reedus talks about Daryl’s relationship with Carol, storming Grady, and more in this interview with The Hollywood Reporter!

THR: Daryl sided with Tyreese over Rick in this episode in a bid to get Beth back in a more peaceful exchange. What has shifted for Daryl that he now backs a nonviolent approach?

Reedus: I don’t know if it’s totally nonviolence. You’ve just got to pick your battles. He’s learned a lot from jumping in head first and things not panning out. When Rick says to Daryl, “We’re not like that,” and he throws a fit around the campfire and says that “We are the walking dead; that’s not us.” He says it for Daryl’s sake. I think all of these characters give each other little gifts here and there. Last week’s episode with Carol, when we see the little kids and she goes to put them out of their misery and Daryl tells her she doesn’t have to, he doesn’t tell her he’s going to; he tries to do it while she’s sleeping. It just shows how close all these characters are. When we’re sitting around the fire and Rick says that, Daryl needs to hear [it]. Daryl looks up to Rick and follows him. And if Rick is saying things like that, Daryl thinks everything is f—ed, so [Rick] has to recognize in himself and through Daryl what he’s saying and has to backtrack and say, “No, you’re right, there is hope.”

THR: One of the kidnapped cops tricks Sasha and runs back presumably to warn Dawn. What kind of ramifications will that have on Rick’s group now that it appears their peaceful plan has backfired and they no longer have the element of surprise? Can they really do this peaceful hostage exchange?

Reedus: Daryl is thinking, “What’s it going to take?” He doesn’t want anything to happen to Beth, so if he can avoid bullets flying back and forth and get her out of there, that’s his first option. Daryl in seasons one, two and three would have just gone in there and burned the whole building down and taken the bodies out. But now he’s thinking and doesn’t want to lose Beth or get hit by a stray bullet or caught in the crossfire. He’s trying to save the hostage instead of killing him because it might be a bargaining tool. But I don’t think that our group thinks we’re going to lose. Look at us. You have those people at the hospital and they’re armed with guns, but I really don’t think they’re as bad as the Governor (David Morrissey) or some of the other things we’ve gotten out of. The main concern is not hurting our girls in the process. Daryl keeps losing girls — it’s a lot like real life! (Laughs.)

THR: Daryl seems to be the only member of the group who is interested in finding Beth. Do you find it odd that Maggie was eager to go in a different direction?

Reedus: That was curious. We all cling on to things in certain ways. I think that gets addressed later on, so there will be an answer to that. You’ll hear different backstories. Beth has meant a lot to Daryl. It wasn’t so much lovey-dovey feelings; she had hope in her. Hope in anyone is hard to find in this world. He thought, “Hell, we could live in this house together and maybe things can be good. I know we’re going to have to leave this house at some point but let’s hold on to this for a second.” If he had butterflies in his stomach, I don’t think he understood what those were, but he was down to feel those butterflies. She means a lot to him, as does Carol. It’s a very important mission for Daryl.

THR: During last week’s episode, Carol acknowledges that Daryl has really become a man. How much do you think his approach toward rescuing Beth and Carol is connected to that?

Reedus: A lot. In the beginning, he would have gone in there guns blazing. He’s matured a lot. What’s interesting about that episode, too, there was so much fire and dialogue about ashes and burning out and being reborn like a phoenix. There were so many hidden things in that. There are so many moments in that episode where, “I’ve got your back” and “You don’t have to tell me what happened, you can tell me when you want.” And so many Norman-likes-Melissa things in that episode as well as Daryl-likes-Carol — and vice versa. It’s those moments that pay off because we’ve been in this fight for so long.

And also check out this interview with Tyler James Williams (Noah) where he talks about his new place in the group and how he doesn’t think Daryl is going to trust him anytime soon!

Hmmm, wonder what all of this bodes for the mid-season finale? Let us know your thoughts below!