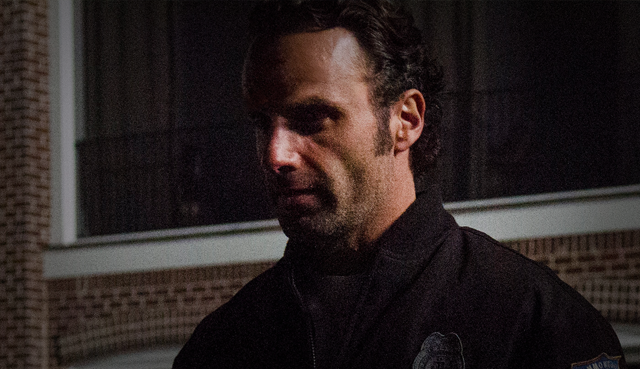 Andrew Lincoln talked to EW about shooting the fight scene from Episode 515: Try. OBVIOUS SPOILERS if you haven’t watched the episode yet. If you’re all caught up, read on:

EW: That was such a physically and emotionally charged scene. How do you get yourself ready for something like that?

ANDREW LINCOLN: It feels like the story’s been heading to this point for a few episodes. When I read the script I knew that there was a big thing that needed to be tackled with pretty much everything that I had—like you say, physically and emotionally. It’s amazing how playing this guy for five years now and also having relationships with a lot of the principal cast that go beyond the story—they’re very deep relationships with crew and cast. I mean you can feel it on set. It was funny because one of the new actresses whose joined us, she came up to me after the day and she said, “I haven’t been on a set like that. That’s a film set you’ve got going on because the crew are silent.” I think the crew is silent because they know that I’ve got to do my job, you what I mean? They know that there’s a big scene. In fact, that scene could have been, and we spoke about it, it could have been the season finale just because of what happened in the context of the story.

Absolutely. I told you it felt like that to me when you were filming it.

Angela Kang had written such a brilliant episode. I don’t really sleep the night before when I know that I’ve got a job to do. It sort of occupies most of my head, but it’s amazing from a physical involvement—you know, the fight—how it unlocks you and frees you. The wonderful thing about this scene is it’s very much a return of the man and the leader and so I knew that there was a lot riding on it. I knew that it was important to reach a certain level. You know I listen to music. I kind of just get focused and then I try and leave myself alone and just see what happens in the scene.

It’s very difficult to explain a scene like that, and I’m very fortunate I’m surrounded by people that really kind of encourage. I feel very safe in the show and I think that’s more than half of it, but I have to sort of doff my cap and give credit to [episode director] Mike Satrazemis, who has been on this show and been by my side since the very first episode. It’s wonderful to see this guy and Greg Nicotero and, of course, Scott Gimple, and all these people that have been rewarded for their talent.

What was it like working with Mike on this scene?

Mike was really, really good in this episode. It was the first time I had the opportunity to work with Mike, but he knows me so well because he’s been looking through the camera for so long [as director of photography]. He kind of gave me a few whispered notes in between different setups—just to sort of move me in different directions and keep it fresh, because I think the difficulty with doing a scene like that is to keep it alive—to keep it real because it’s kind of like an endurance. That’s because we were doing it from countless different angles all day. I think he was really, really helpful in keeping it alive. And it changed. There’s a lot of stuff that you saw at the start that was probably too big for the actual cut maybe. I don’t know because I don’t watch the show, but it was fun to do because it’s kind of exciting to just keep pushing it into different places.

What I noticed that was interesting is the intensity that you gave when the camera wasn’t even on during the rehearsal. You went all in for rehearsal, which you don’t always see, and that sort of sets the tone for everyone else.

Well, I’ve said it before and I’ll continue saying it until they kill me—until I get bitten by the zombies and I’m out—is that this has been the single most important job of my career and it continues to become more important. I think that the other thing is that there’s a lot of new cast members, as you noticed on the set, and there is a responsibility that I think I have and all the other principal people that have been on the show for a long time to show and just say, it’s a safe place. I go big just to stop myself from playing safe I suppose.

So much of acting is about the risk of daring to look foolish. In a show like this, you can look foolish pretty easily. Interestingly, you can look foolish if you don’t fully inhabit the emotions and all the rest of it. It’s better to go big and go f— it, I don’t give a s— what anybody…I’m not worried what people are thinking about. You just focus on playing the scene.

And make sure you read our recap and then come discuss Episode 515 here!