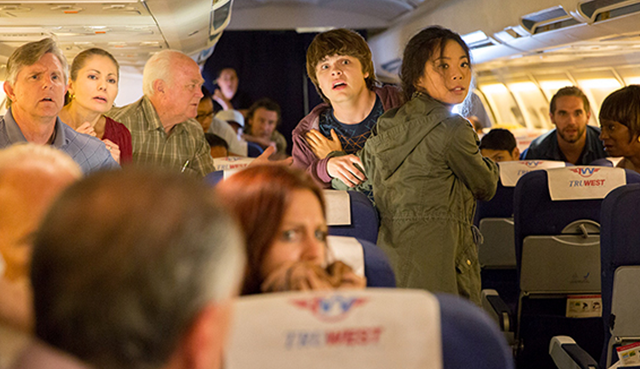 AMC has officially announced a new sister project to Fear the Walking Dead called Fear the Walking Dead: Flight 462, which is a 16-part online mini series that features a zombie attack on an airplane. Each ‘episode,’ which will be less than a minute long, will air online Sundays at AMC.com and then as promos during commercial breaks of new Walking Dead episodes.

Here’s the official synopsis from AMC: “Fear the Walking Dead: Flight 462” tells the story of a group of passengers aboard a commercial airplane during the earliest moments of the outbreak. Over the course of the series, the plane and the lives of its passengers are put in jeopardy once they discover an infected traveler. The series is written by Lauren Signorino and Mike Zunic and directed by “Fear” director of photography Michael McDonough.

Although it will seem like a stand-alone feature, one of the survivors of the series WILL join the Fear the Walking Dead cast in Season 2. Although AMC has previously released stand-alone Walking Dead web series, this will be the first one that directly crosses over with an existing show.

The Walking Dead Season 5 is Now on Netflix!