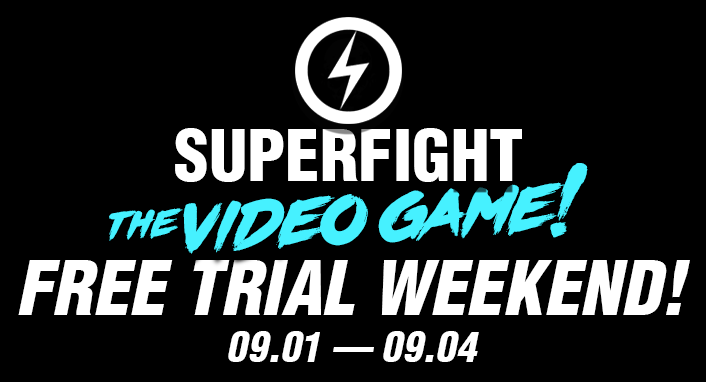 PAX West is this weekend (we’re at booth #6602, by the way) and, in honor of the gaming event, Superfight the Video Game will be free to play on Steam Thursday through Sunday! It’s your chance to try to test out your most absurd arguments online at no cost to you. Grab your friends and your best debating skills and check it out.

You can get more info and read the full press release below:

Start September off Right with a Free SUPERFIGHT Weekend

Eugene, OR — August 30th, 2016 — The leaves are changing color, the sun is ducking behind the horizon earlier each day, and pumpkin spice flavoring has begun its annual infiltration into every food you love. It’s almost Fall, and we’re celebrating the changing of the seasons with a temporary changing of our prices. In other words, we’re hosting a free SUPERFIGHT weekend on Steam!

From September 1st at 10AM PDT to September 5th at 10AM PDT, anyone with a Steam account will be able to download and try SUPERFIGHT, the game of absurd arguments, at no cost!

This is your chance to not only check out SUPERFIGHT at no cost, but to also take a look at the new features we’ve added to the game, including the Challenge Deck game modifier, art gallery, and reworked tiebreaker system.

SUPERFIGHT pits players against one another in hypothetical battles of real wit. The only way to win is to make the most compelling argument about the big questions in life: Who would win in a fight between a drunk Ninja and Abraham Lincoln riding a bear? Which is the better weapon: an infinite sausage lasso or a skunk on a stick? What are the chances an army of penguins could stop a depressed centaur? Grab a microphone, join or create a game with up to 4 players, and let the votes decide!

Build your fighter with character cards (like Zombie, Shark, or George W. Bush) and attribute cards (like Super Speed, Armed with a Chainsaw, or Has Tiny T-Rex Arms). When it’s your turn, simply pick one character card and one attribute card to construct their fighters, then after getting another random attribute, it’s up to you to make your case to an audience of friends or Twitch! The included FREE Blue, Purple, and Challenge Decks also allow players to throw hundreds of random locations, scenarios, and challenges into the mix for even MORE mayhem. Additional themed decks, like the R-rated Red Deck or the Geek themed Orange Deck, are available to purchase, with even more hilarious digital decks to come in future updates

·PLAY with a group of up to four players using matchmaking or inviting your friends.
·VOTE on fighters from previous games, guessing a matchup’s outcome to earn rewards.
·ARGUE using integrated in-game voice and optional webcam support to make your case!
·WATCH and vote for winners in live broadcasts of fights directly within Superfight or any device with Twitch!
·COLLECT over 500 additional cards, on top of the 200+ cards unlocked immediately upon purchase, as you Play or Vote!
·UNLOCK over 130 Titles based on how you play! Customize your round introduction with your Titles.
·EXPAND your card count with the included free Location, Scenario, and Challenge Decks! More decks available as DLC!
·LINK your Twitch account to earn bonus rewards while Broadcasting or Voting on live games (streaming not required to play)!

SUPERFIGHT is available via digital download on STEAM via the following link: http://store.steampowered.com/app/404770/

505 Games is a global video game publisher focused on offering a broad selection of titles for players of all ages and levels. The company publishes games on leading console and handheld platforms as well as for mobile devices and social networks. Product highlights include, Sniper Elite 3, PAYDAY 2, Brothers – A Tale of Two Sons, Terraria, How To Survive, Defense Grid 2, and the upcoming ABZU and ADR1FT.

505 Games has offices in Los Angeles, Milton Keynes, UK, Lyon, Munich, Milan and Madrid and a network of distribution partners within the Nordic territories and Australia. For more information on 505 Games and its products please visit www.505games.com.

Since 1999, Pipeworks has been creating hit games from the indie-games bastion of Eugene, Oregon. Now part of the global Digital Bros Group, we focus on developing and operating innovative live games on all popular digital platforms. With more than twenty million people around the world having played our games, Pipeworks creates distinctive original game properties in addition to long-term collaborations with select partners. We believe in clever gameplay, powerful simplicity, high fidelity, community interaction, games that live on, and having fun above all. Find us at www.Pipeworks.com.

In 2010, The Walking Dead creator Robert Kirkman saw an opportunity to start a company that would nurture creators and give them resources to produce content while retaining creative control of their properties. Partnering with longtime collaborator, and fellow executive producer of The Walking Dead television franchise David Alpert, Skybound Entertainment was born. Since opening its doors Skybound Entertainment has grown into a multiplatform entertainment company.

Behind the Covers of HORIZON

Alicia Gets Chased By The Infected In 210 Clip 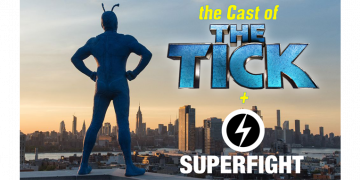 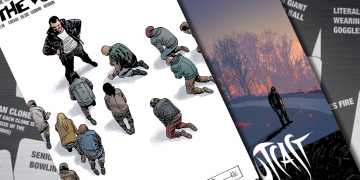 Out This Week- Sept 20th 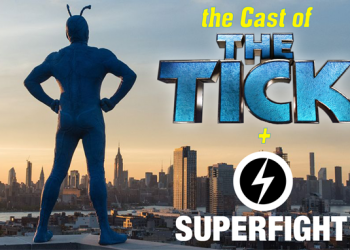 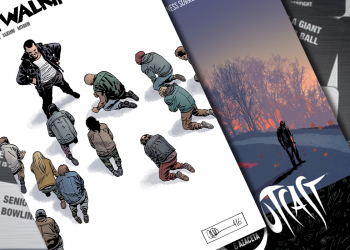 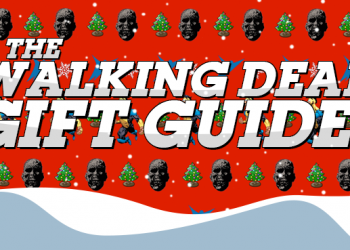