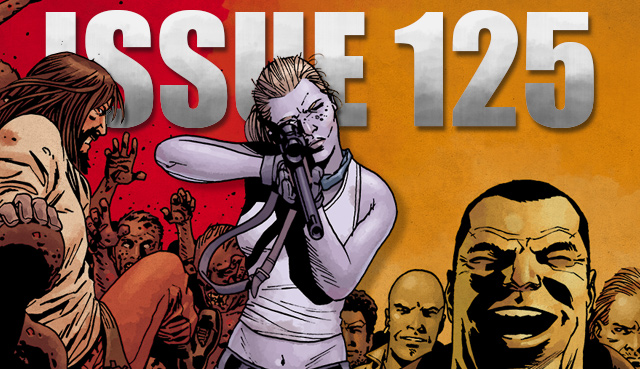 Hi guys. Skybound here. Thanks to the curvature of the Earth and the annoying concept of “time zones” (if you even believe in that sort of thing), people on the East Coast are reading The Walking Dead while we’re still snug in our beds/passed out on the kitchen floor. Whether it’s digital or at their LCS, people are reading TWD and then like, “I’ll just hop onto TheWalkingDead.com so I can disc–WHERE IS TEH POST?!” So we put this post up early so you can, at your leisure, come talk about THE WALKING DEAD #125, ALL OUT WAR PART 11 (Holy Bon Jovi, we’re almost done!!!) as soon as you get it.

We’re not going to list the major plot points until tomorrow, but it’s a 22 page comic, what could possibly happen? Well, except for that ending. Which may or may not result in a riot. But 126 will be out soon, so don’t worry!

And remember, we want you at your commenting best. One super clever person/good speller who posts the objectively best comment (as judged by yours truly and Lizzy-notLizthankyouverymuch) will win a signed copy of Issue 125.

Now make like a Y2K cult classic and bring it on.

UPDATE
Well let’s just get right to it:
Rick did not die, and then he cut Negan’s throat.
Is this a fever dream?
Was Negan seriously considering Rick’s offer?
Has Rick turned heel?
What happens next?!

Also, not to get all stern father on you, but please don’t post full-pages from the comic below. Especially the LAST page. Especially when it ends up at the very top of the comments. I had to delete a comment since Disqus wouldn’t let me just remove the image, and for that I apologize, but we will delete entire comments that have large pieces of significant art.

Our favorite comment was from Cassi, who said, “Here is why Rick is smarter than any of us: He made his big speech for the Saviors and the residents from the three other communities. He knows, however that Negan has caused too much death and destruction to ever be trusted. He’s giving the Saviors a chance to choose sides. Attack and get your ass beat by Jesus, Michonne and the others. Lay down your weapons and we will see if they can be part if the new rebuilt civilization. Every civilization needs soldiers. When you think back on how methodical Negan has been his reaction is not that surprising. He had a plan for everything. He never lashed out in anger. In fact the angriest he ever got only resulted in an Andre-Dice-Clay-like slew of profanity but he walked away and plotted his next move. Negan is a dick but he’s not a stupid dick.”

Congrats, Cassi! Your signed issue #125 will be in the mail shortly!