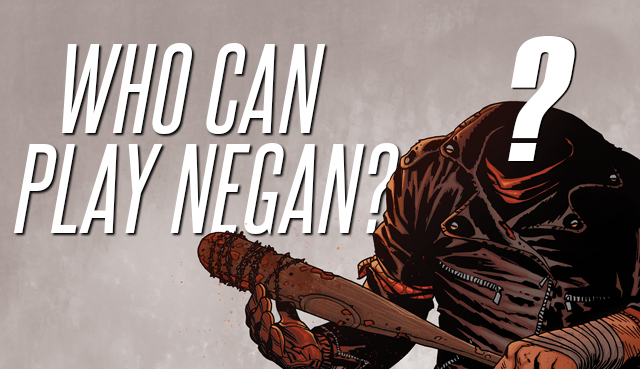 Poll: Who Can Play Negan?

One of our fans’ most common conversations (it pops up on almost every prediction post) is about who the f*#king f*#k is going to play Negan in AMC’s The Walking Dead. In case you don’t know, the character Negan is a bad guy. A very, very bad guy. But not without his own charms—namely an interesting vocabulary that has fans wondering just how AMC is going to deal with him. Now, whether producers have even approached anyone about playing Negan (Robert Kirkman and David Alpert certainly aren’t telling us) remains to be seen. We’ve heard the same rumors you have. In advance of any sort of official—or even unofficial—word we thought it would be fun to run down some of our favorite casting choices you guys have floated. Read ’em and then VOTE! In no particular order they are:

HEIGHT: 6’6″
AGE: 41
I remember seeing Kevin Durand for the first time in Mystery, Alaska as a hockey player. Seemed like a cool guy. In fact, the entire first half of his career it seems like he was playing good guys but for the last half of his career it’s been pretty much bad guy after bad guy. And not just like, bad guys, but scum bags. So maybe he’s perfect. He’s super tall, too. I never thought of Negan as being a giant guy but once some fan said how he should be this huge guy I kind of thought that might be a really cool visual dynamic.

Would he do it: Probably. He’s currently on FX’s The Strain. Not sure how long his character will be on that show but he’s obviously willing to do longer stints on TV.

HEIGHT: 5’9″
AGE: 54
Another very popular choice for hypothetical casting. I think he’s a bit on the short side (an inch shorter than Andy Lincoln) but he has the seething range and cutting sarcasm to carry the mantle of Negan. Basically, his attitude and face are pure Negan perfection. But would that translate on screen when he needs to be super intimidating (probably)? And he might have to dye his hair black.

Would he do it: Probably. He’s no stranger to playing misanthropes and he has a long list of TV roles. He played a really, really, really nasty dude on Sons of Anarchy. So that’s a plus!

HEIGHT: 6’2″
AGE: 44
Hey did you know that Mad Men’s ending?! And wouldn’t it be great if Jon Hamm was cast on another AMC show?! Awesome actor. Funny guy. Probably looks awesome with his hair greased back. And Robert likes him for Negan, too!

Would he do it: Maybe! I would’ve put this down as “unlikely” and then MTV just straight up asked him and he seemed pretty willing. So maybe he’d put his giant movie career on hold just a bit longer to play the man with the bat.

HEIGHT: 6’0
AGE: 54
The jawline. The build. The glare. Chris Meloni certainly looks the part. He also plays hard asses all the time but also has some genuinely great comic chops, which I think the actor playing Negan will need.

Would he do it: Probably. Meloni seems to be game for a wide range of roles, and he’s already taken on a stint on HBO’s True Blood, another genre show with shorter seasons.

HEIGHT: 6’3″
AGE: 50
He’s got the stature and the look for it, that’s for sure. He’s definitely at the top of the most-mentioned names when Negan casting comes up, but I’m not convinced. Have you guys seen him in a non-comedic role? I don’t think I have. His voice is so iconic as a satirical tough-guy that I’m not sure he can pull off the menace you need for Negan. I’d be worried that his epic f-bomb rants would sound a little too comedic instead of insane and awesome.

Would he do it: Probably. He’s a TV vet and it would definitely be a really cool challenge for him if he wants to get more dramatic.

HEIGHT: 6′
AGE: 42
He may be more of a producer/writer/director but Eli Roth is no stranger to being in front of the camera. And he firmly cemented in himself in the pantheon of bat-wielding murderers with a pretty great turn in Tarantino’s Inglourious Basterds.

Would he do it: Unlikley. Eli Roth seems like an insanely busy guy and he has creative control over a lot of his projects. I’m not sure he’d be willing to give up that control to take on a long-running role as an actor.

HEIGHT: 6’3″
AGE: 42
We HAVE to have a Wire actor in here, and while we’d love to include Dominic West (not a bad choice actually) we want to switch things up a bit. Why not Idris Elba? The dude is definitely intimidating and a total badass. Good actor. Big name.

Would he do it: Unlikely. His role as the titular DCI on the awesome BBC “Luther” notwithstanding, I think Idris has his eyes firmly on the movie star track. One thing is sure though: if AMC wants him, they better grab him before he gets cast as James Bond. And if you haven’t watched “Luther” yet, do yourself a favor. It’s on Netflix.

HEIGHT: 6’4″
AGE: 50
You’ve definitely seen Ray Stevenson in something. Whether it’s Thor or Divergent or GI Joe, he’s been in a lot of stuff, usually not as a starring role. He was the Punisher though! I’m not sure anyone actually saw Punisher: War Zone though so maybe the less the said, the better. All things considered though, he definitely looks like a guy that might beat your head in with a baseball bat wrapped in barbwire.

Would he do it: Probably. He’s usually a movie guy, but he has done stints on “Dexter” and “Crossing Lines.” But could he do it? He’s going to be in “Black Sails” as Blackbeard next year which could definitely interfere with an ability to be on TWD.

HEIGHT: 6’1″
AGE: 60
Admittedly, my Chris Noth exposure is limited. He’s the elder statesman of our list but I’m not sure Negan’s age is all that important. He’s got a good look and hair for it. What is up with his IMDb profile pic though?

Would he do it: Probably. I think he’s still on The Good Wife and that’s probably a pretty good gig. If he exits that show though, I think he absolutely would be up for it.

HEIGHT: ?
AGE: ?
Hey why not? AMC gender-swapped the Douglas Monroe character (to Deanna). Could a gender-swap work for Negan? What kind of woman would be needed to embody that role and who could pull it off? A Michelle Rodriguez type? Or someone that can go from sweet and innocent to raving lunatic at the drop of a hat? What do you guys think?

It is time for you to vote!

Home | The Walking Dead | Poll: Who Can Play Negan?

This Isn’t a Ricktatorship… It’s Anarchy.