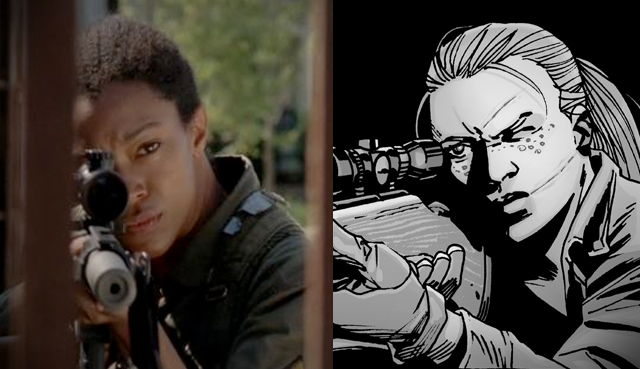 Is Sasha the New Andrea?

Who will replace Andrea? That is the question comic fans have been asking more and more as the show progresses without her, since she is a pivotal character in The Walking Dead comics. Ever since Show Andrea perished early in Season 3, there’s been a lot of speculation about which character will take on Andrea’s role from the comics, where she is still alive after over 100 issues.

At times Carol, and even Michonne, seem to be likely candidates, but Sasha remains firmly in the lead. Don’t believe us? We take a look at Andrea’s major beats in the comics, and the women who picked them up on the show.

(SPOILERS for the comics up to late Alexandria–around issue 80)

Carol’s conflict with Lizzie in the show is a reflection of Andrea and Dale’s same situation in the comics. Instead of Billy and Ben, we have Lizzie and Mika in the show, but you get the picture. Where Andrea was the adoptive mother in the comic book series—dealing with similar events in which Billy dissects Ben—Carol was the one who had to face this challenge on the show. Both stoic badasses, it looked for a while as if Carol might take on Andrea’s role in the comics. That was, until:

In the comics, it’s Dale who gets bitten and subsequently snacked on by the Hunters while Andrea deals with the emotional baggage he leaves behind. In the show, however, this dramatic beat is given to Bob, and as a consequence it’s Sasha who has to deal with his passing. Just like Andrea in the comic, Sasha is there in the last moments as her lover turns. It’s a dark moment, and one that lingers with Andrea (and Sasha) for quite some time.

While in the show everyone might be a master of the headshot, in the comics Andrea is notably the best shot in the group. The first hint that Sasha might fill Andrea’s shoes as the group’s sharpshooter was in Episode 507, when she was given a sniper rifle and designated to watch the Grady cops. Shortly thereafter, when the gang hit the road, it became clear that, gun in hand, she was a force to be reckoned with. Did you see how she took down all those targets outside of Alexandria? Which brings us to…

In Episode 513, Sasha volunteered to be a lookout for Alexandria, so it sounds like Sasha is going to be stationed up in Alexandria’s watchtower just like Andrea was in the comics! Using her expert sniping skills, Andrea took to defending Alexandria from on high, and now it appears that Sasha is going to do the same.

We wouldn’t dare suggest that this might end up being Carol for fear of the “Caryl” shippers rioting. BUT there is some definite chemistry between Rick and Michonne. Will she end up with Rick, or, as the show progresses, will Sasha end up in a relationship with him? It’s hard to say for now, because in the comics Rick doesn’t jump right into a relationship with Andrea. First he dates Jessie, for what feels like 100 issues but is actually just a few.

It’s probably fair to say that Rick is going to hit it off with an Alexandrian before finally settling with someone from the group, but as time passes, maybe Sasha will fall for Rick just as Andrea did in the comics.

So, what do you guys think? Will Sasha become Comic Andrea, or will the writers continue spreading out her significant moments between characters? Which would you rather see happen? Comment and let us know!

Home | The Walking Dead | Is Sasha the New Andrea?