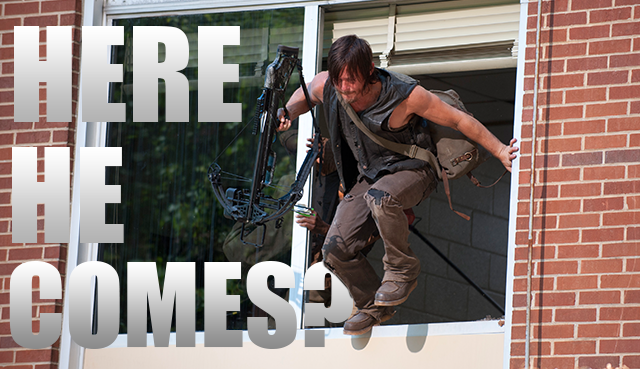 Is Daryl Heading to the Comic?

Robert Kirkman has gone back and forth on whether or not we’ll see either of the Dixon brothers in the comics.

Right before the “Something to Fear” storyline, Kirkman hinted that Daryl might be making an appearance.

“I’ve definitely considered writing Daryl in to the comics,” said Kirkman. “Norman is always pestering me about it. All I can say right now is that if you have been paying attention to the Internet we did just release a series of teasers called ‘Something to Fear’ for a new story arc that’s coming up and it’s a series of very threatening looking people with very specific weapons and one of them has a crossbow.”

However, as fans of The Walking Dead comics know, the character was a new addition to the cast. Then, just last year at San Diego Comic Con, when Robert Kirkman was asked if Daryl Dixon would ever be in the comics, he answered with a resounding no.

“I have thought about it,” Kirkman said, “but in the end, I like the fact that there are only certain characters you can do in different mediums.”

But Daryl fans, don’t give up hope yet! This past weekend at Amazing Arizona Comic Con, Robert elaborated quite a bit on potentially having Daryl show up. Here’s the full except from the panel:

“I guess it wouldn’t be a bad thing if Daryl Dixon showed up in the comic. But I don’t know. I really like the separation. I like that when we sit down to write the show one of the first things we deal with is: ‘How does Daryl Dixon change this story?’ Because we always start from: ‘Ok, we like this part of the comic. How are we going to do it?’

But yeah, I don’t know. It would be cool if he was in the comic, but I don’t really have any plans on doing that. But I guess he would be the one if I was going to pull any character from the show into the comic, it would be him. Mostly just because I love Norman [Reedus]. Handsome dude.”

It looks like everyone is crushing on Norman. Daryl is awesome, no doubt, but with a such a rich cast of characters already do we even need Daryl in the comic? He’s great in the show, but maybe for now he should just live on the screen.

What are your thoughts? Do you think it makes sense to bring Daryl to the comics? Let us know in the comments!

Home | The Walking Dead | Is Daryl Heading to the Comic?