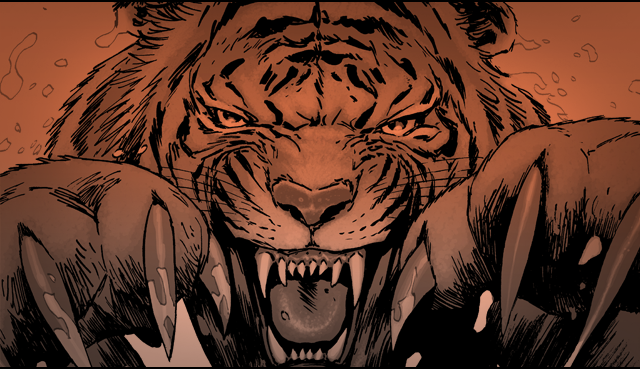 Is a Tame Tiger in the Apocalypse Even Possible?

Hey guys! As mentioned previously, we’re trying to bring in some different writers with different viewpoints and expertise. Today we have Ryan Haupt. Ryan’s a PhD student that spends way too much of his time thinking about pop culture and how science relates to it. He’s also a writer and asked us if we wanted him to write about Shiva. Duh. We could talk about Shiva all day long. Here’s Ryan:

I’d come to expect just about anything from The Walking Dead, and then there was a tiger on a leash. As someone who studies cats from time to time, my mind of course pondered the plausibility of having and maintaining a large predator in the apocalypse. Before we dive into the details of just how a tiger might fare in a world full of zombies, it’s important to understand some big cat basics.

Tigers are one of four species of ‘big’ cats living today, all comprised within the genus Panthera. Amongst tigers there are many subspecies, including the Siberian tiger (Panthera tigris altaica) which is the largest cat alive today, and possibly one of the largest cats to ever live. Full grown males can reach sizes up to 490 lbs (but sightings have reported beasts of 850 lbs and out of shape cats in captivity can get over 1,000 lbs) and over 10 feet long nose to tail. Like many other mammals, males are larger than females, so as Shiva is a female Bengal tiger (Panthera tigris tigris), she wouldn’t be nearly that big, but a tiger is still a tiger. If I had to guess based on her subspecies and how she’s drawn (i.e. about as big as a female Bengal gets), I’d say Shiva weighs about 300 lbs and is about 8.5 feet long. Not a small kitty. 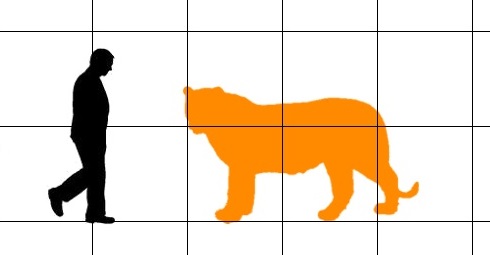 As a brief aside, even though the comic is printed without color, I don’t think Shiva is an albino. 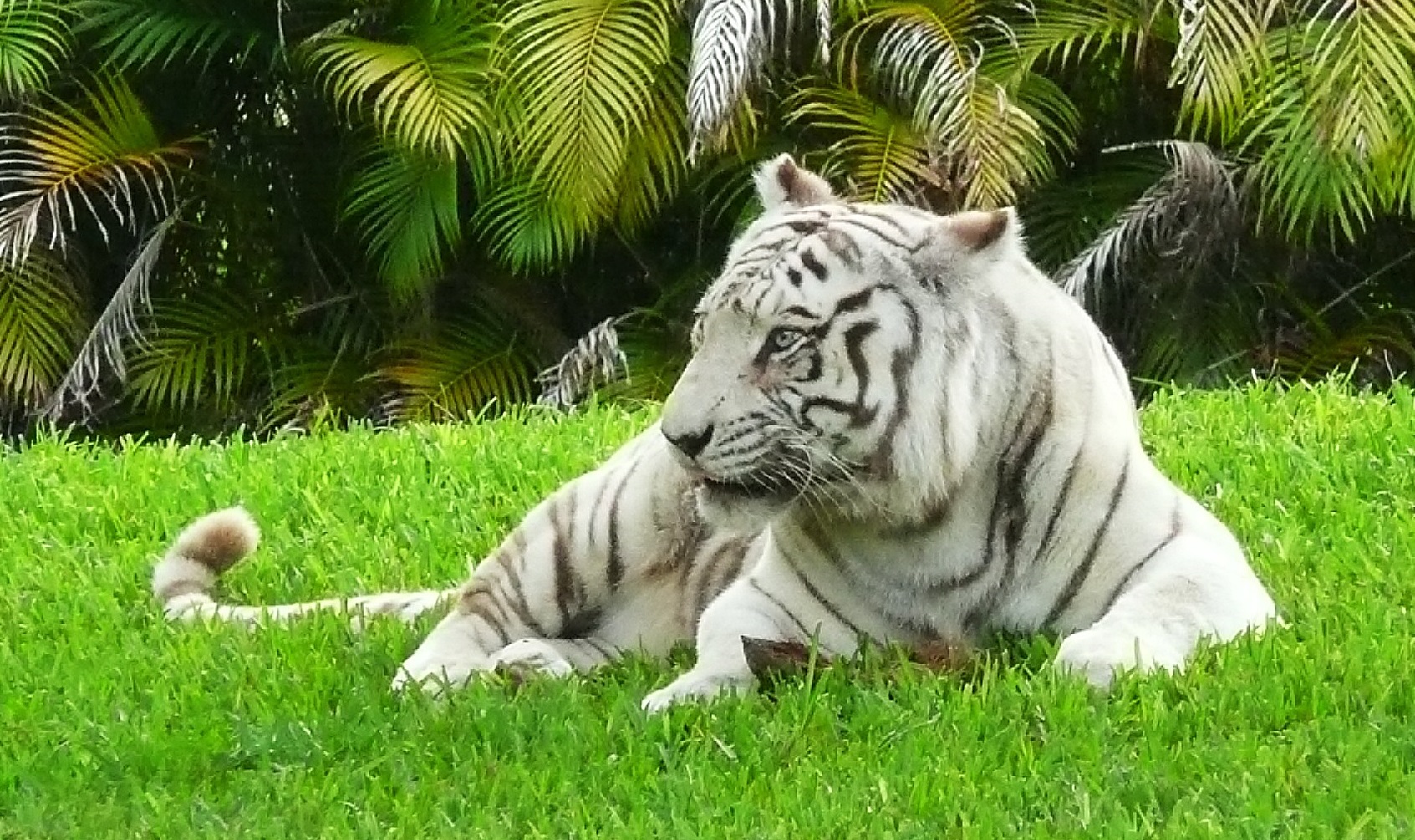 Albinism in Bengal tigers is caused by a recessive mutation that tends to get expressed more often in inbred populations such as those maintained in zoos that don’t have enough tigers to properly mix the gene pool, or chose to breed white tigers on purpose for commercial reasons. White tigers have a whole host of problems associated with their mutation, including being mostly blind and deaf. I don’t think a tiger like that wouldn’t be doing much to help out Ezekiel.

Tigers are native to Asia, and used to have a range all the way from Turkey to the eastern coast of Siberia, but conflicts with humans have significantly reduced their range to the point where there are more tigers living in captivity than in the wild. If the Atlanta Zoo is any indication, the world of The Walking Dead might be full of free-roaming tigers repopulating their old habitats and maybe even settling down in a few new ones. Good for the cats, I say.

Tigers, like most cats, are solitary animals. Each individual maintains a range sufficient to provide enough food, but ranges do overlap, especially between males and females. A male’s range will be up to 3-5x the size of a females so he has access to mates during the mating season. Basically the only time multiple tigers live together for any significant period is when a female is taking care of cubs. For how this applies to the comic, I see two possible scenarios. Shiva may see Ezekiel as her cub, who needs to be protected and taken care of. I don’t think it’s likely that she sees him as a mate since a female tiger doesn’t take care of her mate nor need to protect him. The other option, probably more likely, is that she is acclimatized to humans having grown up in the zoo and thus sees all humans as really dumb, helpless, and inefficient tigers; which some research suggests is how domesticated cats sees their owners. This would make her more tame than a feral tiger (a different concept altogether than domestication) and thus possible for Ezekiel to exert some level of control over her behavior. By way of a historical analogy, I have heard of bars in places like Vietnam having ‘guard’ tigers, in lieu of a human bouncer. Essentially a tiger on a chain that decides if you’ll be drinking there that evening, although it’s possible my grandpa was yanking my proverbial chain with this yard. Regardless, this level of training seems to be about the level Shiva is at throughout most of her arc.

Now onto the silly stuff. I’m willing to accept fantastical elements in a story, even one as grounded as The Walking Dead, so the presence of Shiva never really bugged me. Except for her eating zombies. There are few issues I have with this concept, so let’s work through them and see if we can’t come to some sort of resolution. To begin, Tigers aren’t scavengers. Which then begs the question of whether or not eating zombies counts as scavenging. I think this is mostly a problem of definitions, since we’ve defined hunting versus scavenging as the difference between killing something to eat it or eating something already dead, and zombies don’t quite fit either definition. If scavenging can maybe thought of as “passive hunting” then perhaps we can call whatever Shiva does “active scavenging”? My thinking is that in her mind it doesn’t make much of a difference. There are things moving, she gets to pounce, which causes them to stop moving. That’s probably satisfying enough for her, especially considering her life spent in the zoo very much not hunting. 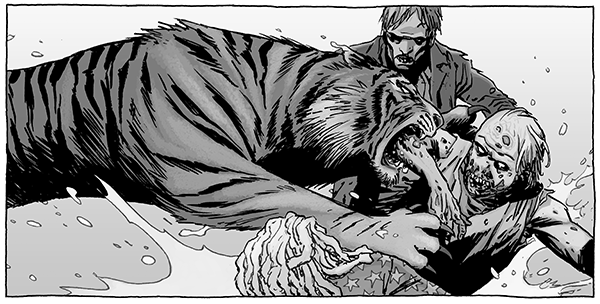 But the other big question remains: how does she not get sick? Scavengers in general tend to have much more robust digestive systems than pure predators. This allows them to eat things that should no longer be safe for animal consumption. Shiva, like all cats, actually has a very simple digestive system. Hypercarnivores, which are animals that exclusively eat meat, can get away with a very basic digestive system, because the food they’re eating is energy-dense and relatively easy to break down, unlike grass, which takes a cow four stomachs to process. As to the zombies’ flesh, I can only assume it is quite putrid. It’s not totally clear at what rate they decay, but by and large they don’t look like they’re holding it together very well. Which also likely means that many of their nutrients have gone south with the rest of them, leaving both a bad taste and not much to gain for it. Taste aside, it has yet to be established if humans could survive eating zombies, but the fact that any sort of bite from a zombie is a death sentence doesn’t bode well for walkers as meal tickets in the other direction. The walkers seem to be predators of us, not the other way around. I’m not suggesting that Shiva would herself become an undead tiger, because we have yet to see whatever causes the reanimation jump species, but I have to believe it at the very least would make her sick. This may be the one aspect of Shiva’s lifestyle I just can’t get behind, but at the same time it would be ridiculous to keep a cat that size around and feed her food that could go to humans, so I appreciate the need for her to have a more or less renewable supply of meat that isn’t taking it out of the mouths to citizens of the Kingdom.

Ironically, I think Shiva might have had a better life in the end of the world than before. Modern zoos are doing a much better job at maintaining apex predators than they used to, but I think she probably enjoys being out and about with her pal Ezekiel much more, and treating the walkers as big fleshy laser pointer dots. Suffice it to say, when the end times arrive, as we all know they most certainly will, keep a hypercarnivore on your side.

Home | The Walking Dead | Is a Tame Tiger in the Apocalypse Even Possible?