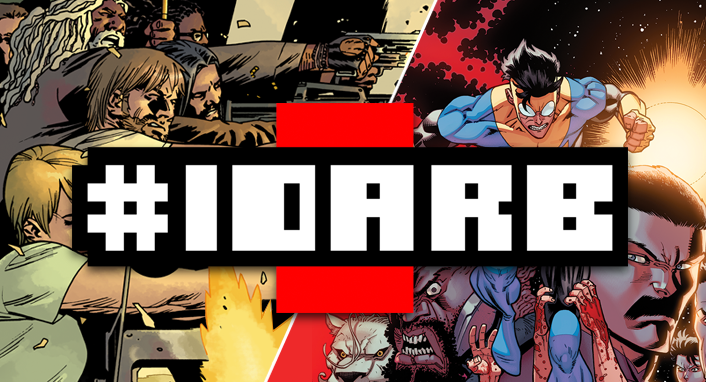 The Walking Dead/Invincible DLC pack includes:
• 2 New Arenas with unique play modes
• Beware walkers and other obstacles on the playfield in The Walking Dead arena!
• Take to the skies in The Invincible arena where your heroic leaps make for epic battles
• 2 Exclusive Half-time mini-games!
• Fight for survival in “Halftimenstein” a First Person Shooting classic!
• In “Sky Knights” heroes go head-to-head as they joust for supremacy
• 2 New Teams! The Walking Dead and Invincible!
• Custom “The Walking Dead” and “Invincible” Hashbombs

Here’s a complete rundown of the update:

OTHER TWEAKS AND FIXES:
• Flags on VS. screen for online games.
• Hashbombs are off during transitions and selection screens.
• Added vibration to penalty zone.
• Smartcasting – Backdrop and PIP gameplay screen with action logic.
• Twitter crawl crash bug fixed.
• Ball cursor is now a personal setting – not overridden by host in online games.
• Rage quits tracked per team.
• Half Time wins tracked per team.
• Added Bouncy Floors – Also resets double jump when encountered.
• Rage Quits under 10 seconds are not counted – implemented “Missed Connection.”
• New credits sequence to accommodate continued contributions.
• Grammar and spelling corrections to recipes and in-game text.
• Japanese font now supported by the text crawl.
• Additional teams added and a new system created to prevent stomping of user generated teams.
• Tug of war – added grunts, sounds, and reduced the goal line distance.
• Boo hashbomb revisited.
• Ball no longer warps out of the top of map. Hopefully doesn’t freak out in other ways!
• Added 37 new lines of VO.
• Added New Logos to the ad loop. We made more friends!
• Infinite fizz bug should be finally eliminated. This should also address 3rd party controller issues.
• Behind goal paint and goal color drawing updated to support quarterly side-switching.
• Fixed bug where practice play with one player existed but halftime wouldn’t activate.
• Fixed transition from menu to local play start game.
• Added street lingo titles to team make-up on team selector. (Via Charla)
• Re-organized the team on-boarding to allow for future AI co-op and competitive modes.
• Timed characters to the beat on the main menu for our OCD friends.
• You can now make TEMPO stop in Song Editor when you press Y.
• Versus screen for online now has drop-shadows to separate characters from the backdrop.
• Fixed character select bug on locked teams.
• Added character highlight box, which only comes up now but will have a future purpose.
• Fixed the Dead Presidents team song.
• Fixed the On-line Wins/Losses team tracker.
• Music now plays on the team viewer.